I decided to scratch it off yesterday.  I never do this sort of thing so I had to read the directions on the back first.  At least they were in English.  Did you notice the most important part of the front was in Spanish?  I took French in school.  Not much help.  Since when do lottery tickets come in Spanish?

One by one I scratched them with a spoon.  One by one I was disappointed.  Now I know why this particular ticket was purchased.  It's a Bingo card.  Scratch off everything in one row matching the images below and you're a winner.

Not me however.  I had three chances to uncover an entire row and missed the boat.  At least I saved whoever owned it the disappointment of losing.  C'est la vie!!! 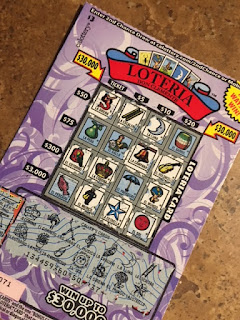 Next up I gathered several dog toys for the Zoo.  The Coyote should love the Seek-A-Treat.  Same with the raccoons.  I'm sure they'll figure it out in a flash. 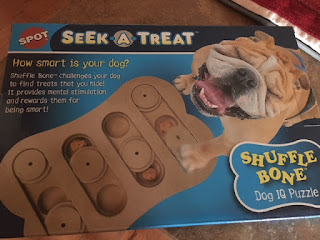 This one is for the fast eater who gobbles their food down.  I dropped off a big box of "toys" for the zoo kids, but completely forgot the box of ice cream in my freezer for the human critters.  It's not on my "eat" list.  No worries, I'll find someone to pawn it off on before I leave. 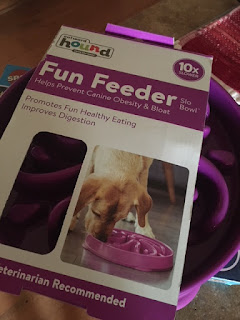 I packed a few things up before heading off to my hair appointment.  I'd show you a picture, but you would be just as shocked as I was.  Just a little color was interpreted as "let's dye the heck out of her and get rid of ALL that gray"!!!

That wasn't what I had in mind AT ALL!!!  I made her reveal her color secrets before I left so I could buy something at the store for upkeep until I return in October, when I totally expect her to fix it.  It's not that I don't like the color, it's the every-six-weeks upkeep I don't want to pay for or deal with!!!

Now that I'm incognito, I thought maybe I could cook something that would turn out wonderful.  Stuffed bell peppers were on the menu when I was a kid.  I think I was the only one in the house who ate them.  Usually filled to the brim with rice and tasty hamburger, I left out the rice and added cheese.

Know what?  They were pretty yummy ... especially since I added some of that cajun spice.  This fills my meal requirements until I leave.  In the meantime, I guess I better get packing. 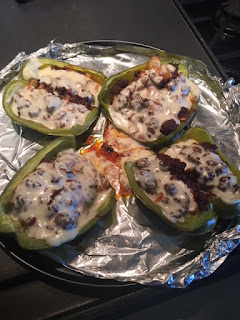 Just a quick note and a few tears for my friends Patsy and Bill Richards who just lost the best little puppy ever at 15 years of age.  Mr. Clemson was a sweetheart, a puppy beyond compare.  I consider myself lucky I got to pet him a few times before he went to Heaven.  I just know he's up there playing with Mandy, my little black schnauzer, the love of my life.  Happy play time you two!!!