I want to wish all you Dads out there a great day, whether working on the house, playing with grandkids or watching a baseball game.  Without you, we wouldn't be here.  While you're at it, take the time to teach those grandkids everything you can.  Just imagine how much fun it will be when they takes those worms into the house and show them to Mom!! 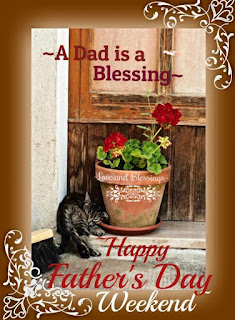 There's a big Father's Day Breakfast at the Elks Lodge this morning, but you'll be happy to know I didn't volunteer.  I'm a little gun shy after the workout at the fair.

Instead, I decided to make fat bombs.  Yup, that's what they are called in Ketoland.  They didn't really sound like something I would like to eat.  I'm still having trouble with my brain while I'm eating a piece of bacon every morning.

Here's the recipe in case you want to try it.  It's pretty simple ... 8 ounces of softened cream cheese, not quite one cup of peanut butter (preferably the no sugar added kind) and 1/4 cup Swerve, along with a dash of vanilla.  Beat it up relentlessly with your mixer and place in the fridge.

An hour later (maybe two), using a small cookie scoop, place them on a pan covered in parchment paper.  Stick in toothpicks to make it easier for the next step and place them in the freezer. 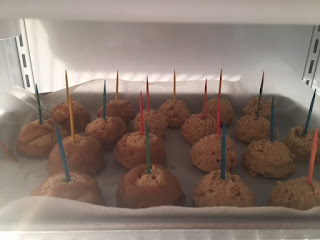 Next up, melt semi sweet chocolate chips in a bowl in your microwave.  Why doesn't this look like chocolate?  Because all I could find was peanut butter chips.  When melted, stir in one tablespoon (maybe a tad bit more) of oil ... I used avocado oil because it's also what I had.

Using the toothpick as a holder, dip and roll them in the melted "chocolate".  Back in the freezer they go. 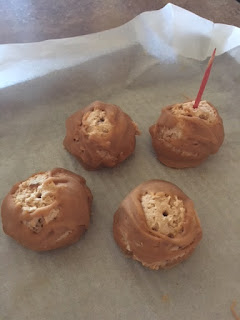 Once done, take out the toothpicks and store in a zip lock bag in the freezer.  When you need something sweet and amazingly delicious resembling a huge piece of candy, take one out and enjoy.  I have to say these are so rich that one is almost too much.  Half of one completely removed my sweet tooth craving. 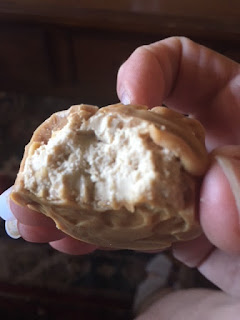 Here's the weird part.  I won't tell you what the calories are, but as you can imagine, it's pretty high in fat.  I've been eating this way for about 50 days and I've lost a little over 9 pounds.  How could that be??  Maybe it's all the vegetables and salads along with the meat.  Maybe it's not eating bread, potatoes, rice or sugar.  I do know that I'm never hungry any more and don't crave the sweets nearly as much as I used to.

It took some time to get over the loss of bread, but now I don't mind at all.  It's much easier to say no to bread than candy!!  I've even gotten to a place where the littlest bit of aftertaste from Swerve has disappeared.  If all you do is replace sugar with Swerve, I think you would be ahead of the game.

The bad news is I haven't found a replacement for ice cream.  I did, but the thought of eating almost pure heavy cream is a little unsettling to me.  Besides, with fat bombs, who needs ice cream??