You're not going to believe this one folks!!  There's nothing like a little panic in the morning to wake you up.  I was sleeping restlessly for about an hour when all of a sudden there was such a huge BANG it shook the doors of the house.  I seriously thought it was a home invasion!

I grabbed my gun and the puppies before heading for my closet.  It was quiet.  That's funny, the dogs didn't even bark.  I sat in the dark waiting.

Hearing no other noise except something out front, I snuck out and crept through the house, my heart in my throat.  You cannot imagine the blood pumping in my ears.

There's that funny noise again.  I finally screwed up my courage and opened the front door to find a geyser of water on my front lawn.  OMG!!!  My well exploded!!!!

It took my brain a minute to kick in.  Actually, it took five minutes after being flooded with adrenaline.  I called the Pump Company.  Busy signal.  At 2:50 in the morning????

I called the second company who had an after hours number.  Poor guy ... obviously I woke him up.  I apologized, then explained my problem.  Turn off the circuit breaker for the well he said.  OH ... now THAT'S a good idea!!  I seriously had no clue!! 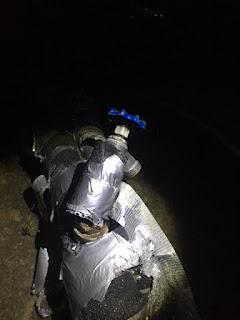 Send me a picture he said, so I did.  It appears the hose spigot is what exploded.  He said he could come fix it now or when they open.  When you open please, as the screaming headache began to raise it's ugly head.

Here's the best part of all.  My neighbor says hello from the dark recesses of his garage.  I'm not surprised because I know he works graveyard shift.  I WAS a little surprised when he told me he was just out smoking marijuana.  Really?  Sadly, he looks like he's lost 50 pounds.

Marijuana makes you talkative, in case you were wondering.  I've never tried it myself, but spent many a night listening to others when I worked in Yosemite National Park.  Way back in the 60's while employed by the Health Department, they burned some in an ashtray so we would know what it smelled like.  I got VERY sick just from the smell, so it's something I never wanted to even get close to.

He couldn't talk fast enough and went on to explain how our neighbor down the street chewed him out about bringing riff raff into our neighborhood with all his "buddies" who came to smoke with him.  I suspect there is more than just marijuana.

By now my headache is screaming in my brain and I'm still so full of adrenaline, I'm shaking.  Hopefully this will all subside soon and things will get back to normal.  Yes, there's probably going to be a hefty bill in my near future, especially if that explosion damaged anything else.  It's a good thing it happened before I left.

I'll be on the couch trying to calm myself down.

Posted by Nancy Kissack at 4:11 AM