Do NOT Lick The Knife

We all do it.  There's something particularly yummy laying along the edge of that knife.  Frosting, peanut butter, fudge ... something delicious that just should not be washed away.  I used to use my fingers, but that left too much of the good stuff behind.  Then I had to wash not only the knife, but my fingers.  Besides, you might cut yourself.

Why not save time and water by just licking the knife?  I've tempted fate a few times, for only for frosting.  NOTHING beats frosting in my book.

Might I say there is a big difference between the knife on the left and the one on the right.  Width is particularly important.  I'm here to say you should NOT lick a knife with a narrow rather bent blade.  Yup ... I did it ... and now have a nice slash across my upper lip.  I'm pretty sure that's because I had just sharpened it.  It's hard to get a bandaid to stick to your lip!! 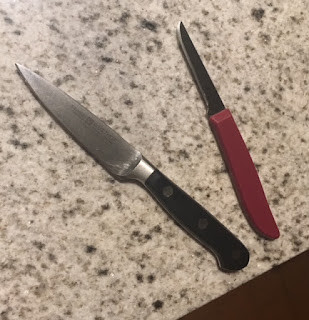 I'll survive I suppose.  Maybe it will even help my diet, since it's uncomfortable to eat.  Or maybe THIS will help!!!  Ice cream trumps frosting any day.  This is rather funny as a Keto dessert, since it's how I made ice cream for years, except the sweetener was sugar.  This time it was Swerve.

I had the two cup mason jar, it was the lid that was elusive.  Luckily, the Mason Jar company makes lots of different sized jars and only one size lid.  Just for kicks, I tried it.  The cocoa powder didn't mix very well with the cream upon shaking.  After an hour in the freezer, I opened the lid to a "pouf" of cocoa in my face.  Note to self ... shake harder and longer next time. 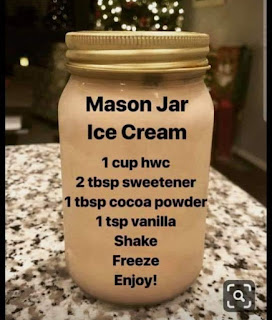 Better yet, leave out the cocoa and make vanilla ice cream, or maybe add a little instant coffee.  The perfect activity for the next visit with the grandkids.  Was it good?  Heck yeah!!  It's ice cream!!!  Not near as sweet as the real thing, but cold and delicious when you're craving sweets. 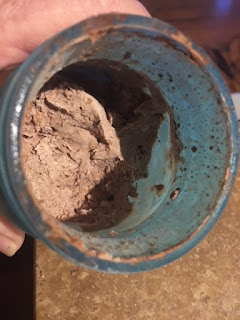 Of course that little mason jar isn't going to last long.  No problem, I've got five more in the cupboard.  That's perfect since I'm sure it will take five jars before my lip heals up.