What a day THAT was!!  Heavens to Betsy .... it was one of the craziest ever!  It was dark and overcast the first few hours, along with a cold breeze that just didn't want to stop.

Even with rain predicted all day long, people showed up in droves.  I guess it just goes to show how badly they need to get out and about.  I suppose you could say it went okay in spite of the southern wind that chilled us to the bone.

I again worked the slide most of the day since yet another rookie employee showed up.  It amazes me every day, the difference in humans who have some initiative built in and those that just stand there with a blank look on their face. 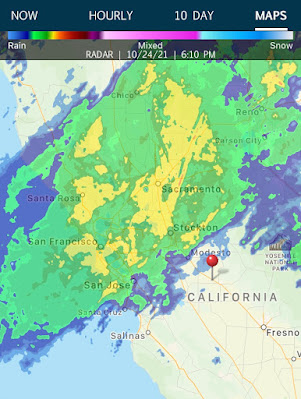 After a couple of hours, it was time to give the gal on top a break, so I climbed Mount Corn Chute to find her very apprehensive about the wind.  I admit, up top it was probably 35 to 45 miles per hour, shaking the slide a little now and then.  The hardest part was trying to put those lightweight rugs down for the people to sit on.
It took some maneuvering, but we stayed the course and ran a couple of hundred people down the slide.
Everything went well until the sunshades over the bounce began to tear apart.  Yup the wind was that bad.  These shades hang down about four feet in the middle, but as you can see, they are flying through the air, ripping out all the carabiners holding then in place.  The most popular bounce pillow had to be shut down.
We kept everything else running as best we could.  At last it got so bad we had to shut down the slide also.  The dust was epic!  The word went out .. close at 4:00, then wait ... the rain won't start until 7:00 so keep going, but the winds were on my side, meaning we finally closed the entire place at 4:00. YAY for me ... I got four hours off!! 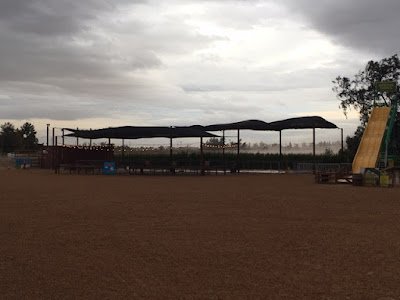 Almost anyway ... soon there was a frantic race to stack all the hay and cover up anything that would get wet from the torrential rains on the horizon.
My last task was chasing a birthday party out of the barn.  The ever diplomatic Ella, a sweet girl who was trying to get them to leave at 4:00, wasn't having any luck.  I on the other hand, am an expert at ushering people out the door!!  I went in the barn at 4:20 and had them out by 4:30, thanking them profusely for their patronage.  They were actually very happy about the party, even though they ate a little sand with their cake.
Finally, completely beat up from the wind and the tornado-like sand storm, I headed for home.  I would have had dinner, but I was too tired.
It rained all night making for fitful sleep, but the good news is I don't have to go back until Noon today.  Hooray for RAIN!!!!  I might even get the ENTIRE day off!!!
Only SIX MORE DAYS!!
Miles walked 6.92
Total so far:  178.62