It was an epic day Saturday.  The parking lot is about 30 acres big and we ran out of spaces.  They were parking cars in the almond orchards trying to accommodate everyone.  The good thing is that so many people crowded every square foot that I was forced to walk very slowly.  Every little bit helps!

This is the 100 year old olive tree on the property.  On this day I only had to drag three kids from the branches.  Sometimes it amazes me how inattentive parents can be. 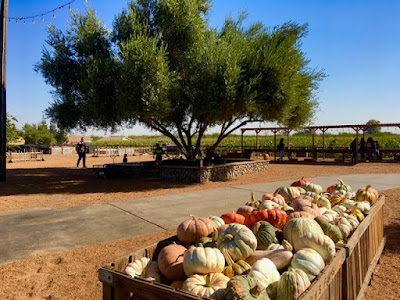 Here's a shot of the new kitchen, probably five times the size I had for five years to produce all the same food.  Yesterday they could not keep up with the crowds.  What do we serve?  Hot dogs, sno-cones, absolutely awful tasting decorator Halloween cookies, chips, nachos with cheese only and tri-tip sandwiches, along with sodas and water.  Yesterday, the lines were epic. 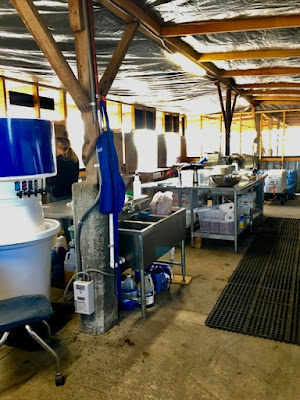 It started off nicely with me dodging a few remaining wasps.  It's weird that my hand has just now swollen up and begun to itch like crazy.  In spite of the honey bee frenzy due to all those sno-cones that land on the ground, there were no stings on this day!!
The hardest part is keeping all the attractions going when kids do not show up for work.  Why hire high school kids?  Because they all get school credit for working at the Patch.  They each work 4 hours before they can go home.  Almost all of them are amazingly good, do exactly what they are told and are good customer service advocates.
Some just stand there and never say a word.  Those are the ones I try to bring out of their shell.  Talk to people ... be friendly.  One very small sweetheart, I think maybe 14 years old, has the entire Time Travel Tractor riders under her spell.  She has them yelling with excitement before they take off into the land of the dinosaurs.  An adult in a teenage body.  I just love seeing that!!
I probably spend three hours every day giving breaks.  Wasn't I surprised when I discovered we only had four mining bags left!!  This is our sluice box gem mining station, complete with screened boxes to help find those treasures that end up in the glass on your kitchen table.
The "gems" are put in plastic bags, then filled with sand.  They get a bag-o-paydirt while we explain how they let the water run through their box, cleaning out the sand like the Gold Miners used to do.  VOILA!  They scream with excitement when they find the rocks in the bottom.  Not just any rocks, these are Australian quartz along with some turquoise, real crystals, killer magnets, several pieces of pyrite and a carved dinosaur.  We of course ooh and aah over every single find. 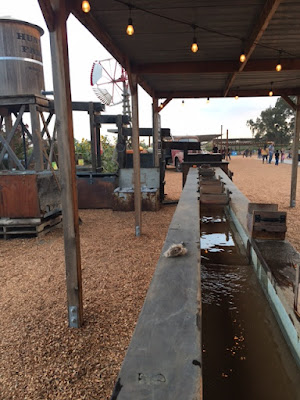 Even I ended up screaming while giving a break when I discovered we only had FOUR bags left for this epic crowd!  I went into panic mode filling the last few bags we had with sand, before heading to the shop to make more.  LOTS more.  I was in Heaven ... sitting down!!!!
Yup we have to measure out exactly two ounces of Aussie mix, two magnets, three pyrite and one dyno-mite piece in each cup, dump in the bag and do it again.  For an hour I got to sit down until I was shooed back out on the grounds. 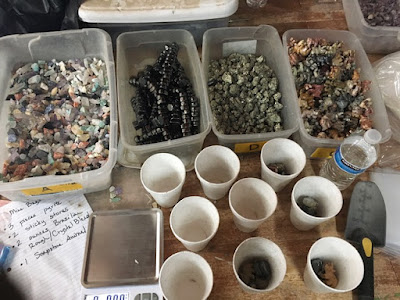 I rarely ever get a lunch break, but on this day I was so tired, I snuck off to the other 100 year old tree on the property, which is full of green lemons.  Biggest tree I've ever seen.  Unfortunately, the hot dog disappeared before I could even get a picture. 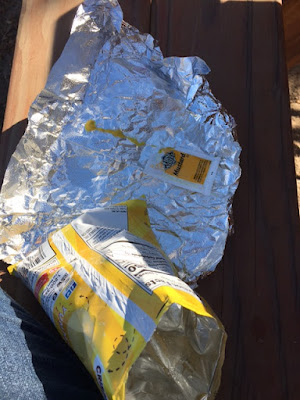 I'm thinking we had maybe 3,000 people on the grounds.  Even with TWO hay rides running around the route twice as fast as normal, they could not keep up with the lines.  I was sure we would have a terrible time getting everyone to leave, but to my surprise, they were all out by 8:20.  YES!!!  Finally I can sit down and not get yelled at for slacking!!!
I don't know what today holds, but I'm thinking it's going to be another record setter.
Total miles walked:  114.18
That means I've now walked from Tucson all the way to Phoenix with a mile to spare.