It's always an interesting day at the Patch.  You never know what people are going to do or how they are going to react to following the rules.  I can say the same for the teenagers working there.

I tell the kids all the time ... YOU ARE THE BOSS!  Don't let these parents run you over or not follow the rules just because they are older.  Of course we know there is always ONE ... and in this case at least TEN that think they can do whatever they want.  It doesn't help when the workers LET them.

The lady said she was going to ride the slide.  As she walked up I spotted sandals.  As stated on not one, but THREE signs, you MUST WEAR CLOSED TOE SHOES.  In spite of calling her back as she pushed her two small children up the 30 feet high stairs, she refused to come down.

At the top the kids screamed and broke into tears, forcing me to stop the entire operation, and her to walk them all the way back down.  After having a little talk with the kids, I guarantee you that never happened again.  Why do people think they can do whatever they want?  It surprises me every time. 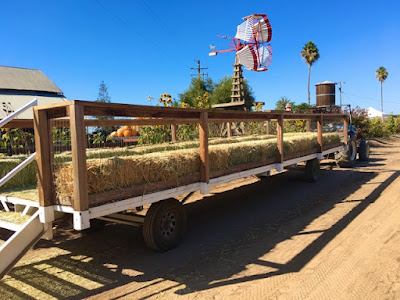 We were so crowded yesterday, I'm guessing anywhere from 2,000-4,000 people, that we brought out the second hay ride wagon to be pulled by the latest and greatest tractor.  Turns out it wasn't so great after all.
They asked me to drive for an hour or so, which I love.  Hey .... I get to sit DOWN ... take a load off ... rest the tootsies!  The other guy who schedules all the kids told me to park it under the almond trees when done.  I knew better than that ... nothing will make the Owner happier than breaking off big limbs on those almond trees.  When the line got shorter, I drove around the corner and made a left.  That was a very bad move, but heck ... I didn't know.
When I told the boss where it was, he said GREAT ... you can't back up and you can't get around that way. Now YOU figure out how to get the tractor and trailer back.
Okay then ...... so I went and got the other tractor driver who drives for them all the time, a really nice guy.  He said no problem.  He drove it around the house and through the orchard.  Lucky for me!!  So I walked up to the boss and said I got it done!!!  I called the guys who work for you.  I actually got a fist bump, even though I was pretty sure I was on the firing line. 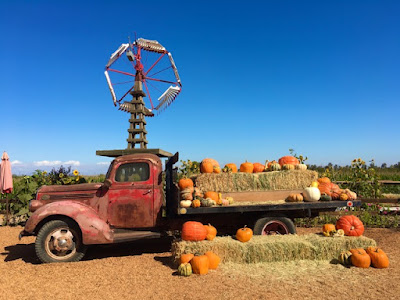 Things went pretty well the rest of the day, but I fought with the second employee kid working the slide for letting people take kids down in their laps.  Once one person does it, EVERYONE wants to, calling us racist for not letting THEM do the same.  It just amazes me what people will do to get their way. 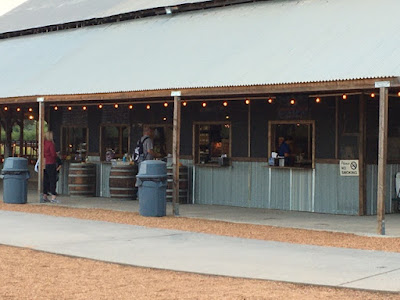 I completely forgot my phone, so no snack bar pictures yet.  There was a flurry of "what the heck" when they bought 2500 hot dogs and buns, fearing they would all go to waste.  Instead, they sold out of everything in one day.
Here's my latest tri-tip sandwich tip.  Once barbecued and sliced up, they rolled the meat in a mixture of barbecue sauce and Asian hot sauce.  I'm not one for eating pepper hot food, but it was probably the best I've ever eaten. 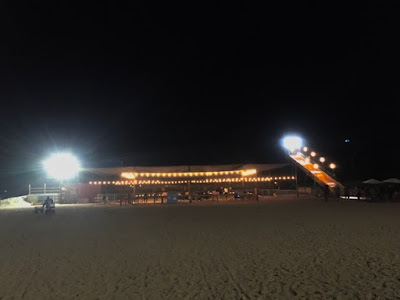 This is one of my favorite pictures.  I'm pretty sure he was looking over my shoulder all day yesterday, but we GOT 'ER DONE and survived the eleven hour day.  That's a long time to be dealing with bratty kids and even worse parents.  No worries though ... it's all made better by the nice people who tell us how immaculate the place is, how much fun they had and how this is their first outing of the entire year. 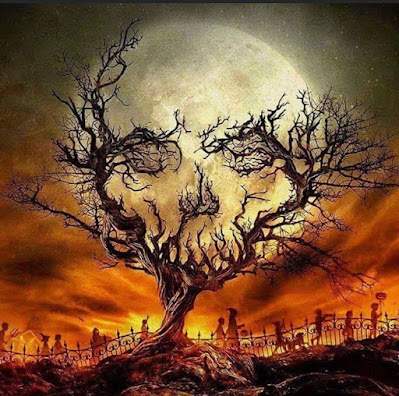 The best news ever??  With winds predicted to be 45 mph today, they closed down completely.