It was an exciting day as thunderclouds appear across the entire sky.  Sadly, nothing came of it.  I was really hoping it would rain cats and dogs ..... meaning we could close down for a day and I could rest up.  My feet are so mad they aren't even talking to me any more!! 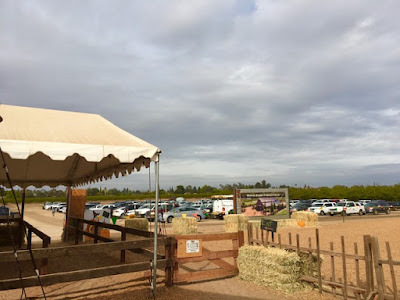 Some groups are highly organized and some are not even close.  The Westside Ministry with 112 kids came in with everyone having name tags and organized to the hilt.  LOVE them!!  They took over the barn for the evening with snacks for the kids, played all night and left in an orderly manner.  Not one kid was lost, nor did any of them talk back to ANYONE!

On the other hand, four home schools came in with unruly children and more adults than kids.  One was found wandering around looking for Mom.  I wandered with him for a time until Mom finally showed up. We probably lose 4 or 5 every year.   It causes a Code 9 where we lock down the entire park, making sure no one can leave until the child is found.  We haven't lost one yet!! 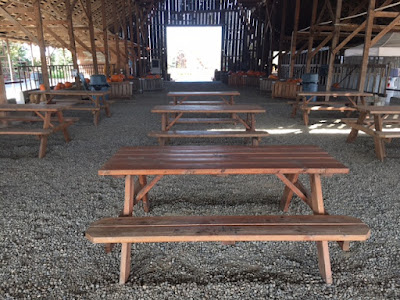 There are also birthday parties scheduled every day in every space.  This area is called the corral because it used to be a corral for holding cattle on the side of the barn.  As you can imagine, cleanup is a big chore in these spaces at the end of the night.
It's so hard to get the people to leave at all, and then they leave a big mess.  Three of my attractions are required to do cleanup before they leave.  Last night one snuck out early for the second time, so you-know-who had to do the cleaning.  Once more and she who wears the longest false eyelashes I've ever seen, will be fired!! 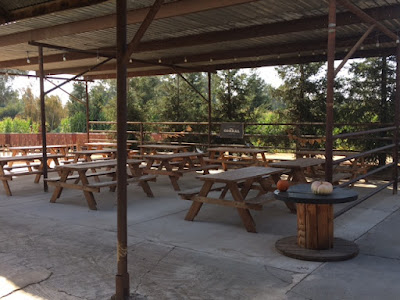 This is the Bullpen.  As the name implies, the dairy farm bulls were kept here.  It's smaller for those smaller birthday parties and Hotel Management meetings.  I know it's weird, but they love the place. 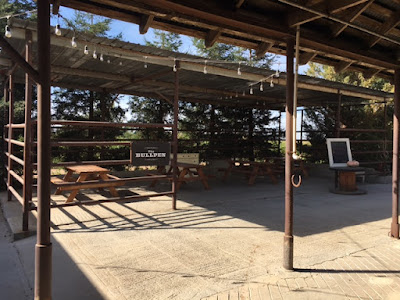 The spooky moon came out to keep an eye on the place last night.  A quick crooked picture as I chased the last remnants of people from the goat barn.  It happens at least twice a day ... people just won't leave.  They take picture after picture as I stand right behind them, refusing to budge.  Seriously, I just want to get home and off my feet.  I don't care if you have 300 pictures of your unruly child. 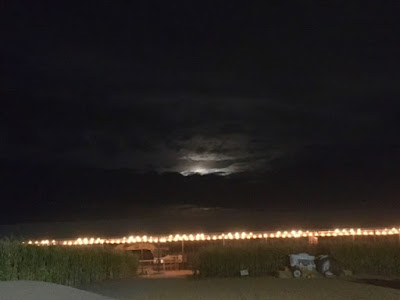 The second Code 9 happened when we ran out of paper towels for the dispensers.  I thought I was Attraction Supervisor, but found out I was also supposed to be in charge of everything else.  Who knew?  I discovered this when I went to notify the boss we were out.  As you can imagine, that didn't go over so well.  Hey .... no one told me to keep an eye on THAT entire section!
Lucky for me I discovered half a box in the Snack Bar, which I promptly stole from them.  Just another thing added to my plate, along with feeding the goats on weekdays and doing general cleanup during pumpkin sales.  No wonder I'm getting so much mileage!! 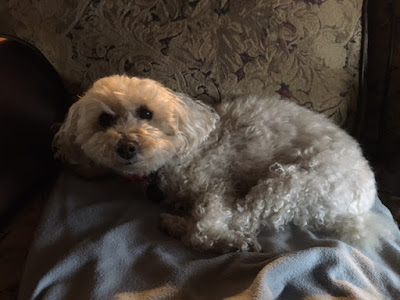 This is exactly what I looked like by the time I got home.  I was pretty beat up as I soaked my feet for three minutes in cold water before crashing into bed exhausted.  That siren that screamed for at least five minutes in my neighborhood last night didn't help.  Bleary eyed ... I'll be back at it this morning at 8:30.  I SWEAR I'm sitting down more today and praying for RAIN which is supposed to hit tomorrow!!
Miles Walked:  9.98
Total to date:  145.07
Posted by Nancy Kissack at 6:08 AM