The Biggest Day In History

I think the Pumpkin Patch has been going for about eight years.  I've worked there for five.  We have never been as crowded as we were last night.  Amazingly, things went pretty well considering we are all exhausted with little patience left for anyone or anything.

Again, three kids didn't show up for work.  I was really scrambling to cover all the attractions.  The "Coach" that sets up the schedule just threw up his hands.  I started out early as a tractor driver, passed that job off to him and headed for the Corn Chute, better known as the slide.

All of these pictures were from previous days because I literally did not have five seconds to take any more.  In no time, a big problem came up.  The slide is going WAY too fast!!  People are catching air.

The day before in the rain, the boss yelled at me to wax it since it was going too slow.  Well all that wax finally took hold on this day.  That meant standing at the top and spraying water on before every single rider.  The water actually slows it down.  Of course the new rugs didn't help either.  I spent about four hours up top, but hey ... I wasn't walking so I was happy. 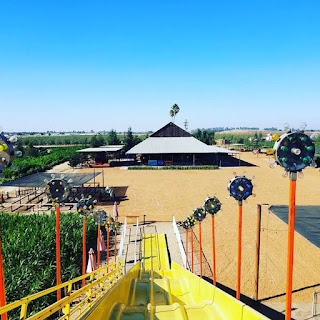 Not able to give breaks, they sent a warm body to me for instructions.  She has never worked any of the attractions, so it's rather hard for her to give breaks, yeah?  No worries, I'll get that radio you just dropped from the top of the slide to the truck bed below.

Finally back on the ground, we were so busy it took three of us to keep the slide moving in record time.  It could have been better had the adults not wanted their two and three year olds to go down the slide.  They must go by themselves (and only if they are 38" tall) ... no riding in laps.  Why do you do that???  They scream, cry and bang their heads ... seriously, you think that's fun?  I just don't get it.

After a couple of those incidences we heard the snack bar call for an ambulance.  OH NO ... but come to find out, it was for a little baby.  Two MORE ambulances came for the son (I don't know how old) who hurt his knee in the Corn Maze.  Couldn't have been too bad since Mom hung around the patch until 8:30 while picking out her favorite mums for free before heading to her car.  Really?  Wouldn't you be with your kid at the hospital?

And one more ambulance for the older gentleman who fell in the Corn Maze. 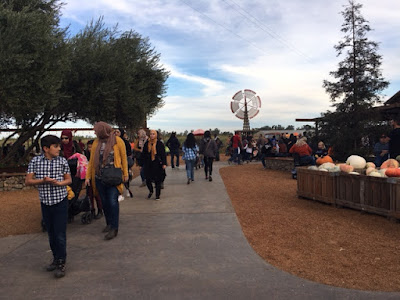 And so it went for EIGHT hours straight without a break or even a hot dog for lunch.  I finally was able to steal Goat Girl (her name is Kaylin, but she works the barn where the goats live) to work the slide.  Although she had never done it before, I threw her to the wolves.  To my surprise, she was AMAZING!  She handled all the adults well, in spite of her tiny size, and worked as hard as I do.  She definitely got a GOLD STAR for the night. 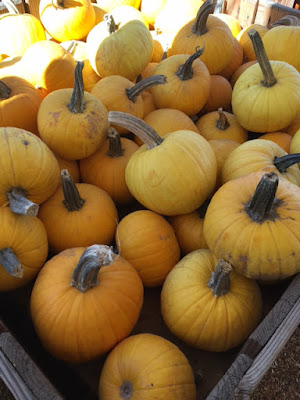 I was able to hike to the top and give my best guy a break.  Josh has worked the top several times and thank goodness he was there yesterday.  He's another excellent worker that I never have to worry about.
At long last the slide wore down a tad and I was able to just stand at the bottom and direct people while folding up the rugs a million times.  You ride down the slide on a rug ... otherwise it's so fast, you will get a burn.  They are big and bulky, causing my hands to now talk to my feet!!
At long last I put up the "we are done" sign and we ran the last few stragglers up the stairs.  CLOSED.  Sorry, but not really sorry at all.  We all gave a huge sigh of relief.
Now to make sure everyone gets OUT.  We close at 8:00 by the way, but by 8:30 I was still chasing people towards the exit.  While doing the last bit of cleanup, I spotted a woman and four kids in the picnic area.  She had lost her keys.  I told her to wait at the front and I would look, which of course she didn't do.
I found her keys in the Time Travel Tractor in record time ... someone must have been watching over me.  She was finally escorted out the gate. 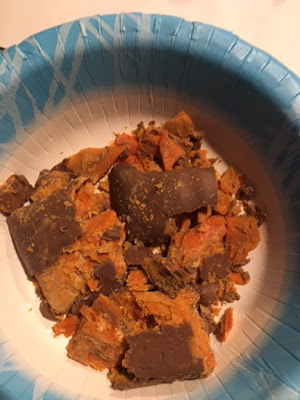 I finally got home just in time for dinner at 9:30.  Yup that's it ... the now crushed Butterfinger I had in my pocket.  I ate it with a spoon!!
Today SHOULD be our last big crowd day of the season.  The last weekend is never as busy ... or at least I HOPE that's true.
Miles Walked:  6.98 even though I spent most of the day at the slide.
Total miles walked:  171.70