I know what you're thinking ....... my tuxedo clad denizens of the night have returned with the irresistible lure of dog food.  The telltale morning whiff on the air however, told a different story.  Believe me, if they are here, you can SMELL them.  Here is my midnight visitor who showed up for dinner at 8:00 ... a beauty to be sure!!

THIS ..... THIS is what I love to see.  He shows up about every three nights.  A Mother Nature creation beyond compare.  Just look at that tail!!!  Sadly, he was too late for the buffet.  The kitty kitty beat him to it and ate every single morsel.
Stolen from the internet, this is about what he looks like in the daylight, although our variety may be a little more red.  They are after their favorite, the backyard chicken dinner.  Upon closer look, the guy above has recently received an award for Predator of the Year, my very own Gopher Abatement Team.  It appears, from the big hole where the little hole once was, that he extracted Loin of Gopher dinner from my lawn.  HOORAH!!! 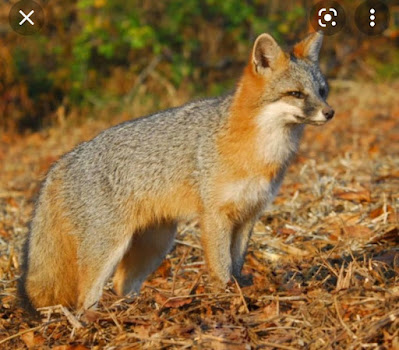 So why was there no whiff on the morning breeze?  I'm hoping it was because yesterday was my first work day.  You can see I'm in my Sunday best boots and shorts, heading out to install the skunk retaining wall.
It was harder than I expected.  There's an art to pounding in these spikes, and as you know, my art includes a sewing machine, not a big hammer.  I immediately ran into a problem.  It seems every fence post has concrete at its base, making it a little difficult to pound anything into it.  In the end, I decided to cover up every hole, or even hint of a hole, and wait to see how it goes.
After several tries, I finally figured out you pound at each end, then the middle, to keep it from bending. 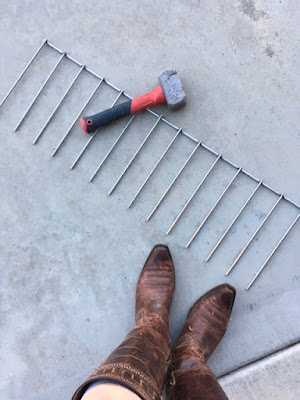 Voila!!!  Skunk fence!!  We shall see if it works.  Much later this morning when I stuck my nose out the door, I caught that essence of de'pue.  I'm hoping it was in frustration because they were knocking, but couldn't get in.  I'll check later this morning. 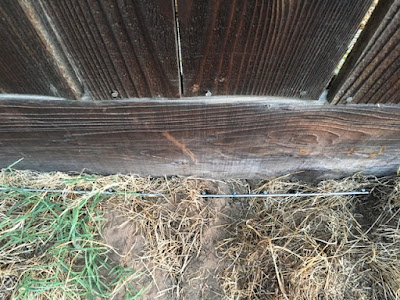 Time to check out the midnight camera.  I'll let you know if I find anything that will cause me even MORE work in the stickers and dirt.
Oh .... another good thing .... FOUR of the six fire ant mounds have no visible movement.  HOORAH TWICE for that good news!!