I'm beginning to think I should lay out some green on Bingo talisman items, go find a rabbits foot for my keychain and plant four leaf clovers in the back yard.  Nothing is assured but death and taxes I suppose, but I could use a little luck.  You could say problems keep your brain thinking and your body moving, but really ..... I've had enough for this month and it's only half over.

I literally cried when my beautiful sewing machine decided not to pick up the bottom thread any more, meaning even though I sewed that seam three times, it's still in two pieces.  No biggie you say, just get it fixed.  Well ... my luck didn't work there either!

Last week the only repair shop in the Central Valley (for these machines) decided one of their best repairmen just had an attitude they could not deal with any more.  He truly had anger issues.  With great trepidation, and rightfully so, they fired him .... nicely I assume.

So he gathered up his stuff, went outside, got in his car and drove it through their front door, 70 feet into the building.  Luckily there were just a few cuts from glass, but lots of damage to the building and most of the inside.  Yes he's in jail on attempted murder charges.

It will now be another week before they can reopen and I'm guessing a week after that before I can get an appointment to have my machine repaired (which takes a minimum of another ten days).  I'm OUT of the sewing business.  I'm not freaking out yet .... but I'm quickly going into withdrawal.  Tomorrow I'm driving all over town and see if I can come up with a cheap stand-in.  I'm sure it won't be as pretty or as easy to use, but at least I can finish up the quilt that's currently on the wall. 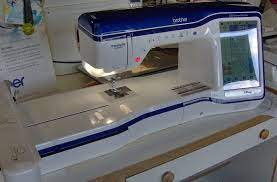 Finally ..... some good news!!  The metal skunk deterrent fence has finally arrived after being shipped all over the country to the wrong address.  The box looked like someone already beat them up with a hammer, but they are intact.  Maybe beating them in place with a BIG hammer will make me forget my $200 sewing machine repair (minimum charge). 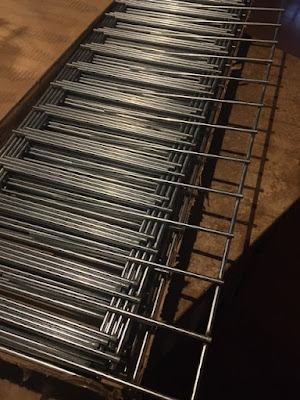 In the meantime, what's with me and the critters?  They seem to be attracted to my aura ... or something!!  There I was, sitting in the dentist chair when I heard some noise ... and "hey little guy"!  I figured someone brought in a puppy.  Suddenly the hygienist gave out a little squeal and ran from the room.  Guess who came to visit me!!
Poor baby squirrel ... and he is a baby ... somehow ran in the front door of the building and was now scurrying around trying to get back out.  I volunteered to get my gloves and catch him, since he didn't seem all that wary of us, but by the time I returned, they had scared the little guy underneath a counter and so far back in the corner that he could not be reached.  I didn't hang around, but I'm sure they finally caught him.  Don't you think he was a happy camper to get back outside to his tree!! 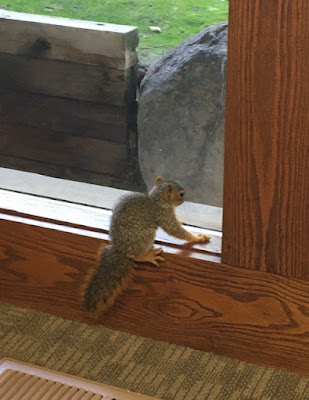 Back home, I sprinkled Amdro over the ant hills that could be found and covered them up so Cooper couldn't get near.  Sure enough, they went for it.  All activity on this one stopped and the holes caved in.  One down, only five to go.
Last night I took Cooper out, but not before walking on the grass for two steps .... BAREFOOT .... to make sure he would not end up getting bit.  He already has two big bumps on his foot that he chews on constantly ... kind of like me.
By the second step I had five new fire ant bites and was jumping around like I stepped on some thumb tacks.  Man those guys are fast ... they bit me before I could even SEE them!!  The grass is so thick and cushy that it hides their mounds completely.  I moved over a few feet and plunked Cooper down.  We both ran back in the house.  This morning I'll check the next two spots and see if they are gone.  Scratch scratch!! 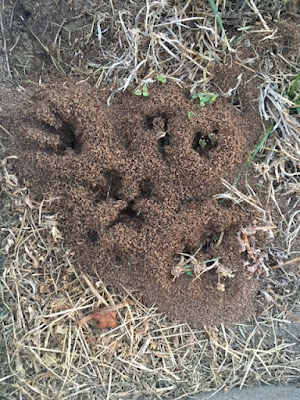 In other interesting local news, it's not safe to go out for Pizza and watch the ballgames.  Apparently there was a Raiders game on and some overly enthusiastic fans.  Something bad was said about the Raiders, so this crazy guy pulls out a gun and shoots him.  I kid you not!  Three others were shot, but luckily only one died.  The shooter is in jail ..... over a lousy baseball game.  Although now, since California is trying to be the worst state in the nation by not requiring bail ... just letting them go ... he might be back on the streets.  Makes you crazy, right???
Today I'll be gearing up for the mega Elks initiation event ... 67 new members coming in to our tiny lodge room which will probably be about 90 degrees.  It's an historic old building with no air conditioning.  Add to that the tight-neck shirt, tie and jacket.  At least we keep the dry cleaners around here in business.  Cooper was helping. 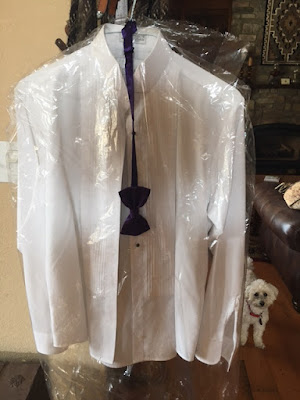 Another day in the books.  I'm still breathing and moving quite well, so I can't complain too much.  Just as soon as my luck turns, I'll take a chance on washing the roof of the fifth wheel!!