You Can Smell The History

Carcross, Yukon Territory, Canada was our destination.  I didn't really have a clue, I was just following along like a rat behind the pied piper.  That's how it is when you've got a handy guy with his wife, your best friend, heading off into the wild blue yonder!  Absolutely no worries.
When they say watch for animals along these roads, you should best pay attention.  We didn't see the big caribou migration, but this is where it happens.  Originally named Caribou Crossing, the name was changed to Carcross to help lessen the confusion by the Post Office mail system of old.  Sounds just like today, no? 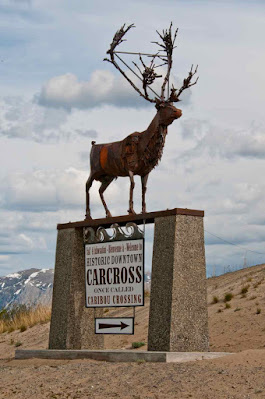 If you were wondering about those gravel roads, yes they were pretty dusty on occasion, but mostly Canadian road construction is a hundred times better than the U.S.  They usually laid down a product that turned the dust to concrete. 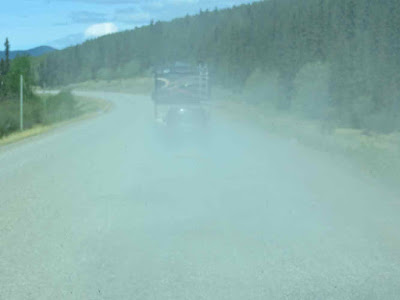 But there were a couple of times we ended up looking like this.  No worries, Canada has these things called car washes. 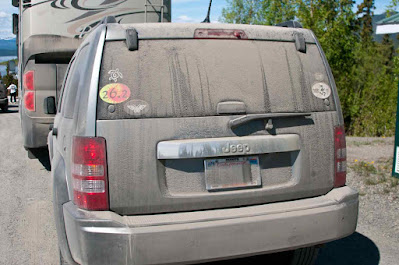 Did I mention the narrow bridges we crossed?  I knew if Dan could get through I could, but I was holding my breath the entire time and I could barely pry my fingers from the steering wheel when we got to the other side. 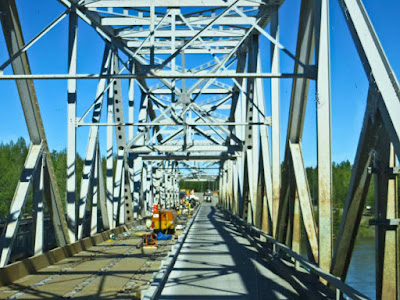 Nope .... this does NOT look like fun ... not even a tiny bit.  He was going uphill when we were already thousands of feet in the air.  Aren't you glad you have a motorhome?? 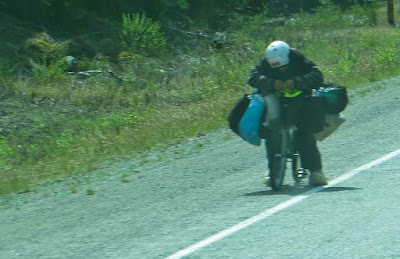 I can tell you there are no bad views in Canada.  Everywhere we went, it looked like this or better.  Were you worried about traffic?  I don't think we ever left the RV parks before 10:00, and rarely met anyone on the road.  Maybe a few fuel trucks. 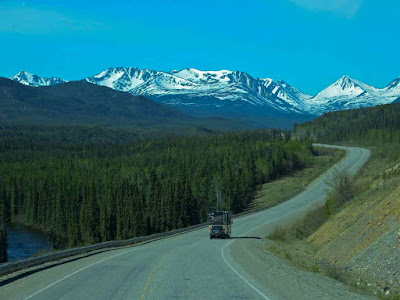 Yes ... and even MORE narrow bridges.  I drove right down the middle, taking up the entire 1-1/2 lanes because it wasn't wide enough for TWO lanes. 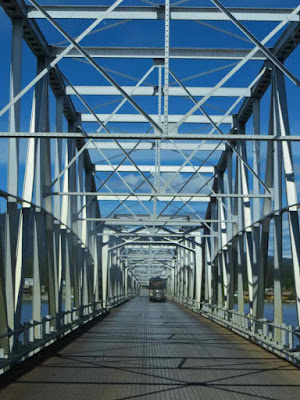 Along the way you will find amazing memorials to the gold rush.  This is the S.S. Tutshi, a steamboat launched in 1917 by the British Yukon Navigation Company.  She hauled passengers that came from Skagway around the nearby lakes and was retired in 1955.  The Canadian government gave her a quick remodel job, but sadly in 1990 she caught fire and burned. 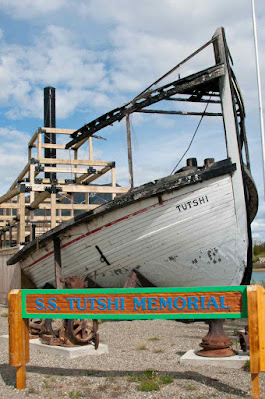 Back in the gold rush days, miners and millionaires came in to Skagway by ship.  From there they began that long climb up and over the Chilcoot Pass, carrying everything they could on their backs (you've probably seen those pictures) heading to Carcross, where they would catch another smaller boat heading toward the gold fields.  It's been awhile since I was there, so anyone feel free to correct me if I don't remember the history right.
With so many people dying for lack of food and supplies, the Canadian government made a requirement of 2,000 pounds of supplies for each and every person.  That meant not one or two, but MANY trips ups and down that pass to get YOUR stash of supplies to the top of the hill.  Some families even disassembled entire BOATS and carried them to the top of the mountain in Carcross, to reassemble them and become rich hauling all the others miners to the gold fields along the river.
Many of the buildings you see in Carcross today are the ones that were built back in the gold rush.  This general store has been open the entire time. 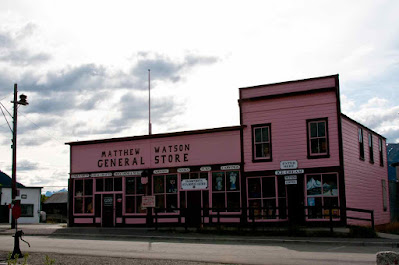 This is the Caribou Hotel which was built in 1898. 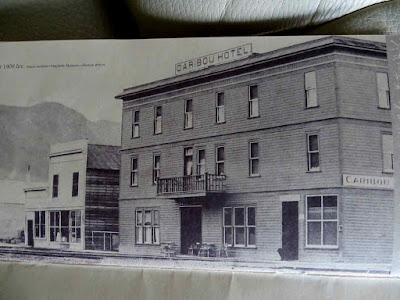 This is the same hotel when we were there.  I read this burned, so it may be the second reincarnation.  You can smell the history here. 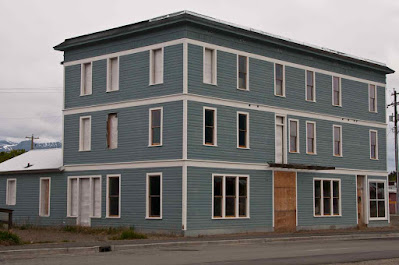 Most of the remaining cabins still have people living in them.  It didn't take Patty and I long to hit up this bakery for some yummy goodies one morning.  Don't expect fancy here. 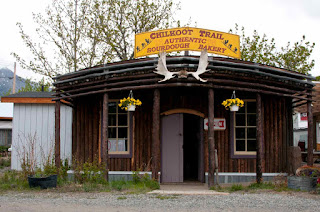 This is a view of the end of Bennett Lake where all those boats hauled over the mountain were put back together, along with thousands built on the shores by people hauling their stuff (and yours if you wanted) to the gold fields of Dawson.  In 1898 there were over 1200 boats built on the little lakes. 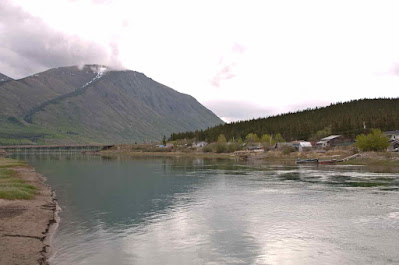 Here's what the boats looked like that made the treacherous trip down and up the Yukon River.  At some points they had to be towed through narrow channels.  Later we will view several of those crazy places they went through. 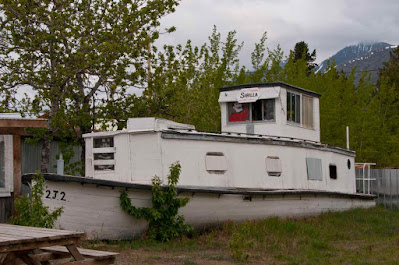 The White Pass and Yukon Railway was built from Bennett to Whitehorse with the connection to Skagway here in Carcross.  If you are ever in this area, a ride on this train is a MUST.  One day Patty and I dropped Dan off here to ride a section he had not been on before, while we went shopping!!  It was a win-win!! 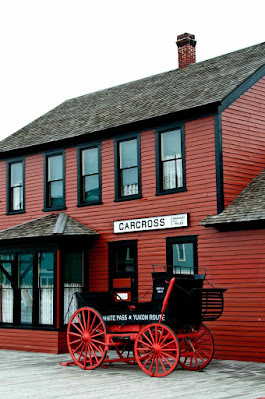 You can walk the entire town of Carcross and it is worth the time.  We stayed at a small parking lot style RV park for a couple of days.
And now it's time to cross the border, answering numerous questions and being fairly scrutinized by a not-the-least-bit-friendly U.S. border guard.  Of all the crossings we made, he was the worst.  Be forewarned, you MUST have a passport to cross back and forth. 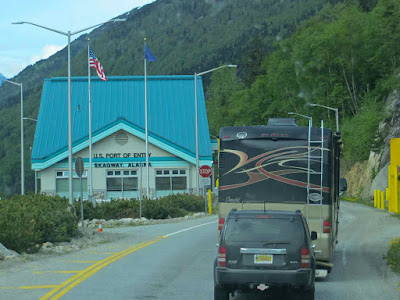 Now, I'm going back to bed.  The Elks initiation went along smoothly, although a little warm.  The 111 predicted by the weather guessers never happened.  They seem to be ten degrees off every day.  It was hot enough to rouse a few male tempers, but other than that, no one passed out or died as was predicted.

On the other hand, we made some money since two guys wore shorts ... a no-no in the Lodge Room.  Maybe Cooper and I will go for a nice semi cool walk.  It's 7:00 am and 80 degrees.

Posted by Nancy Kissack at 7:13 AM