Isn't there a song by that name?  I was not the least bit happy to be taking Cooper, my main man, to the doctor to have his teeth cleaned.  Lucky for him, he has been treated every morning of his life with Dentalife chew sticks.

It is interesting to note however, that since losing Miss Jessie, he has refused to touch them.  He also refuses to eat the dry dog food.  It's been a task just to get him to eat at all.  I don't think it has to do with him being lonely, but rather now he doesn't HAVE to eat it because she's not standing there waiting to scarf up every morsel he misses.  It was a game they played.

Anyway, it was terribly sad when I dropped him off, but nurse Daniel seemed to be really nice and sympathetic.

I went home and hit the sewing room to keep occupied.  Two more borders top and bottom, and this baby is done. 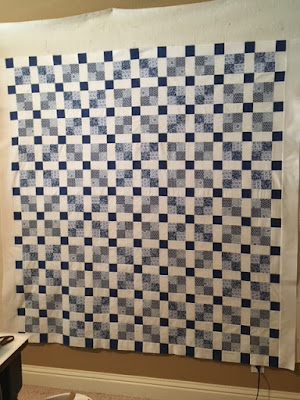 Finally, after a long two hour wait that felt like 16, Daniel called to say Cooper was doing fine.  Thank you to everyone who said a little prayer.  It worked and I was very relieved.  Here's the thing ... he's eleven years old, not a spring chicken any more, and has breathing troubles ever since he caught kennel cough when I boarded him while I ran off to Hawaii.  Yup I feel real guilty over that one!!

He was so out of it when I picked him up at 2:00, he just walked around in a circle.  Try as I might, I couldn't get him to settle down.  On the other hand, the excellent news is he had not one single extraction. His teeth are in great shape, probably due to his jaws of steel from playing with the ball. 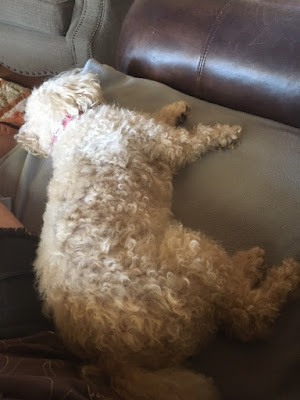 No doubt he was confused and in a little pain, poor baby.  He finally slept for about an hour before deciding he was starving.  No solid food they said, so of course I scrambled an egg and chopped up his favorite treat into teeny tiny bites, like any good doggy mother, right?? 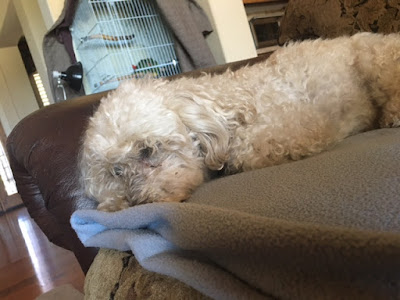 I rolled the ball to him once, and he looked at me like ... ARE YOU #!%$#^% CRAZY?  Apparently the fiber on the outside of the toys got in between his teeth.  Maybe I'll try flossing them from now on. Yeah right!! 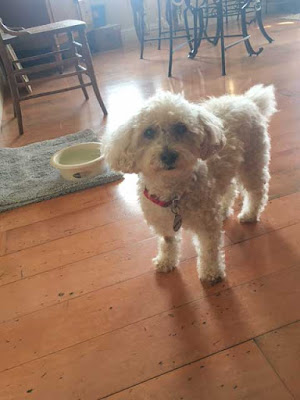 This is a pre-op picture.  I hope he's back to liking me again soon. 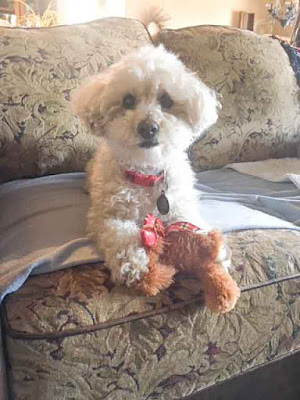 And I hope to soon see this happy face again (also a pre-op picture).  It will be interesting to see if the ball game comes back or if I have to throw away the 20 I bought at the store to keep his stock up. 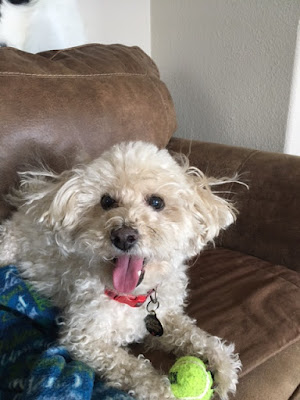 He did bark at a car that drove by the house this morning, so maybe we are on the road to recovery.

In other exciting news .... BINGO IS BACK! and tonight is the night!!  There's been no bingo for 18 months, and the grapevine has told us to expect over 150 people.  Oh boy!!!  Won't that be fun as all us really old folks try to remember how to work the infernal machine and make payouts!!

Posted by Nancy Kissack at 5:33 AM