We're back in Alaska this morning.  In fact, we just crossed the border and decided a sign picture was in order.  At this point I can't believe I drove that rig all this way.  By now I'm feeling pretty smug about navigating the highways and byways.  That lasted until we started down the canyon you see underneath the sign.

Oh my goodness ... only the words that came out of my mouth sounded a little different.  Dan warned me about this one, but little did I know just how steep ... and long ...  it was going to be. 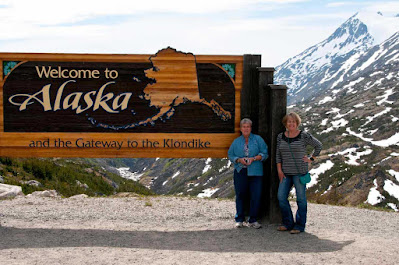 It was nice driving by the melted snow lakes heading up the narrow two lane road to get over the pass.  The reflections are magnificent. 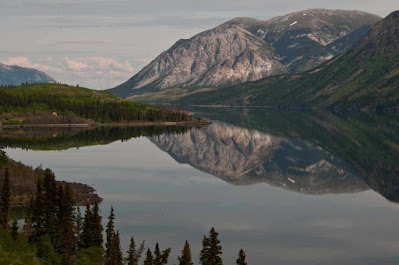 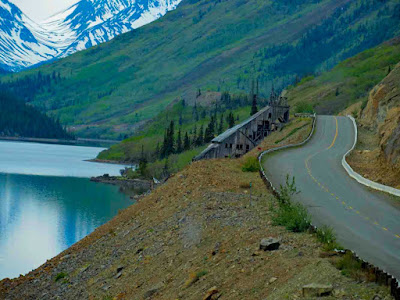 The further along we drove towards Skagway, the more spectacular the scenery was.  It became difficult not to yell STOP into the walkie talkie every half mile so I could take a picture.  Most all of these were taken with a small camera while driving.  Don't tell anyone!! 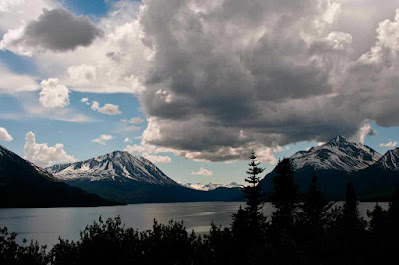 This was the last sight before we dropped over the hill and began the long downhill crawl into Skagway central. 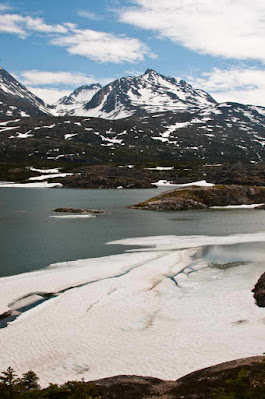 The Corringtons (who Patty and Dan worked for) own several buildings, including one with a small museum in the back.  Back in the day, Mr. Corrington began trade with the natives and has accumulated some amazing things, including trade beads.  If you ever get to town, be sure and check it out.  You can even see the dog sled he used when he raced the Iditarod.

Yes at the very end of Skagway there is a ship docked at the wharf.  That's how close the town is to the ocean. 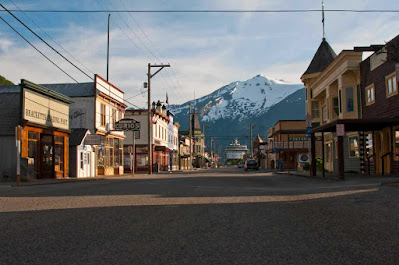 There was so much to see and do, I was overwhelmed.  Most all of the buildings are original, including this one, completely covered in driftwood.  It's the Arctic Brotherhood hall, built for and by gold miners in the late 1800's. 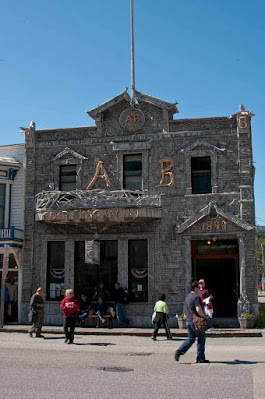 Built in 1898 the Red Onion was the finest brothel and restaurant in Skagway.  Apparently Miss Lydia still walks the halls.  There's a great museum inside with lots of things left by the "girls", as well as great food. You can even take a tour of the upstairs if you don't mind a few risqué pictures on the wall.  This is a definite must see. 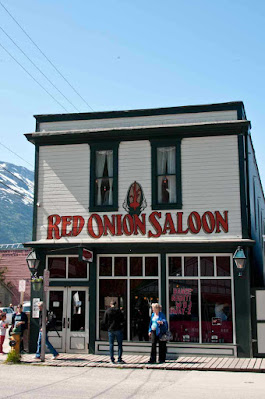 Everyone dresses up for the occasion and the girls still hang out on the balcony as in the old days, offering their services .... no not that kind ... waitress services. 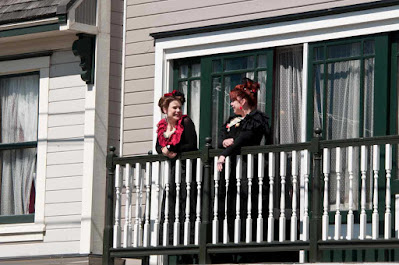 One day we walked down to see one of the ferries unload.  Yup those are RV's coming out the door.  They make quite the racket.  Though I expected to see someone crash, every one came off without a scratch. 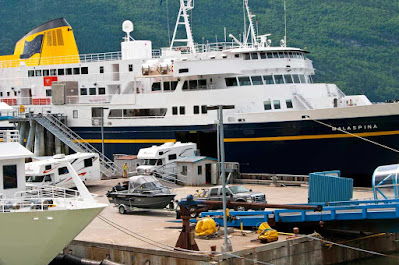 These are the guys lined up to get back ON the ferry heading to Juneau.  You too can ride it if you wish, but we didn't have time. 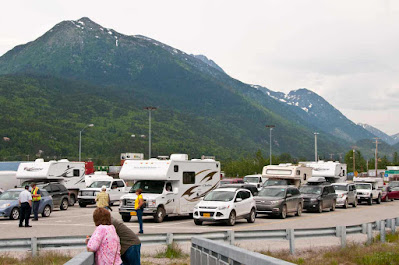 Can you just imagine what those gold miners would have thought ... seeing all this at the same point where they disembarked from their Seattle ship?  It makes you wonder what it will look like in another hundred years?

Kind of a short blog this morning, as I'm taking Cooper in to the vet to have his teeth cleaned.  It's scary, probably more for me than him.  Please keep your fingers crossed for him!!