How many of you wash your cars?  Do you go to a car wash?  I remember back in the days of hot rods and street racing ..... oh, did I tell you I was a race car driver? ....  we spent hours washing, cleaning and waxing our precious dragsters.

It happens I bought a gorgeous blue 1965 Pontiac GTO with the money I made working at the theatre.  $25 a week didn't go far, but it paid for three deuces and four on the floor with a Hurst shifter, previously owned by Benny Two Can.  Benny didn't race much because after two cans of beer, he was wasted.

This is going to resonate with my high school buddy Lynn because she had a Super Bee (remember those?) that she raced occasionally also!!

Later I drove back and forth to work in Yosemite National Park, a two hour drive.  I made it in 90 minutes.  There were always races in the park, and if you knew it well enough, you didn't get caught and arrested by the rangers.  But I digress .....

Yesterday, after looking at how filthy dirty my truck was, I decided to give her a bath.  I've become pretty good at procrastinating about washing vehicles over the years, mostly because of the dreaded motorhome wash.  My goodness ... what a difference.  It took me about two hours and she was squeaky clean.  She looks pretty good for 16 years old!! 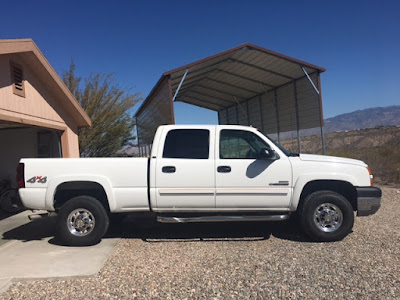 Although she does fit in the garage, it's a tight fit, so I set about moving some of my big steel shelving around.  That didn't work out so well.  There was this huge bag of dandelion explosive kill-it grass fertilizer that fell over before I could grab it.

It looked like an entire box of cornmeal exploded in the garage.   No problem, I'll just vacuum it up.  That didn't work out so well either.  It kept spreading further around the garage the more I vacuumed.  Reluctantly I began surgery on the victim.  Sure enough, it was completely plugged up.  What a fun job THAT was cleaning it out.  At long last, the mess was clean and the truck parked in the garage.  That's when the phone rang. 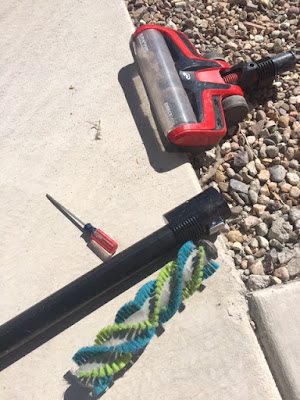 It was LazyDays calling to say my pickup date had been extended.  Already?  When I explained to the lady I planned on camping out in the rig until I was comfortable with all the bells and whistles, which one to push or pull first etc, she wasn't any too happy or accommodating.
I could hear my salesman in the background.  The date was changed to March 6, assuming of course they can get the satellite dish installed, and I hung up.  In about 30 minutes, I got a call from the salesman.  They had already approved the second air conditioner and an extra battery, but now agreed to add in the backup camera and keyless entry installation for the same price.  Yahoo!!
I say keyless installation because I'm buying the lock myself for $200 as compared to THEIR price for the exact same thing of $450.  Pretty crazy, right?  Definitely hoping I don't get locked out!!   Today they will run the credit check and get my loan set up.  I'm not worried in the least about that part.

So now it's a waiting game as I frantically photograph my desert neighbors coming for a little drink.  Rarely do they show up during the day.  They are just so darn cute until you get too close and smell them. 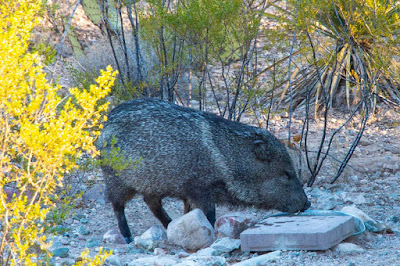 This guy has come to drink at the hummingbird feeder every day, announcing himself with squeaks that sound like a rubber ducky in the bathtub.  It is interesting to note that I have not gotten any critter videos in the last two days.  I'm wondering if it's because there has been an almost full moon for two nights, lighting up the countryside like daylight. 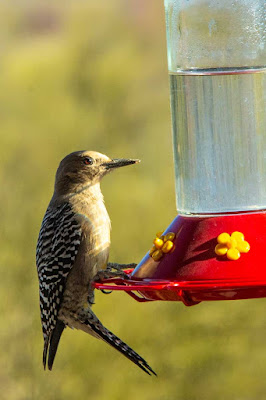 Dinner was another fast food delight from Arby's this time.  It's not very often I would order a fish sandwich.  In fact NEVER, but when they send out a coupon that says 2 for $6, how could you resist.  I have to say this was a really good sandwich, quite tasty with a good tartar sauce. 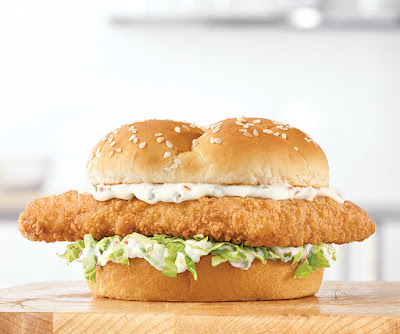 What REALLY caught my eye on the ad was THIS!  A minty milkshake with chocolate sauce.  No I didn't eat four, nor did I even polish off ONE.  It was really good, but I was too full.  I'll have the rest for breakfast this morning. 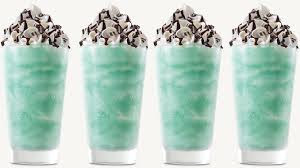 Although I really don't want to take my truck out and get it dirty, I'm determined to get out of the house, even if it's just a trip to the grocery store.  Won't THAT be exciting!!

Posted by Nancy Kissack at 4:55 AM