UPDATE:  Good news:  Rig is dry except for a couple of drops.  It IS plugged in (YAY) and is on enough of a slant that water is not streaming in.  I put the pans in place anyway.


I'm completely defeated.  Exhausted!  Not one spec of energy left.  I just want to run away and hide.  I knew the porch was iffy ... the plywood spongy in one area.  The crew is supposed to cover this with half size pavers.  They rang the doorbell at around 1:30 with terrible news. 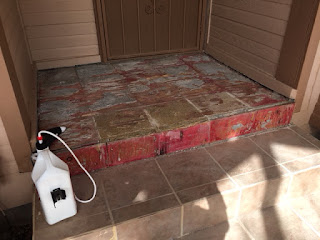 This outside beam is rotten all the way through.  It will have to be replaced because it's basically a structural issue.  Not that it will ever get wet again and become worse, because I put a patio cover over the entire length of this side of the house.

Needless to say, they cannot put pavers on this.  I'm crushed.  Who do I call?  Mr. Dan of course, who came over in a flash.  He says the same thing happened to his house and it's fixable.  I just have to FIND someone who knows how.  The entire project came to a screeching halt.  On Monday the paver company owner will come by to see what he thinks.  They said they have dealt with this before, so hopefully we can come up with something.  I just see $$$$$$$. 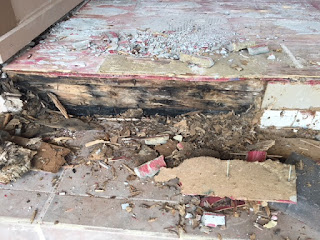 To make it even MORE fun, Carlos from LaMesa RV called to say they had done nothing with my rig.  No repairs of any kind.  Hopefully he said, they will start on it Monday.

Carlos called me AGAIN around 4:30 to say it was plugged in.  My "friend" (who of course is Dan) stopped by and asked he take care of that.  I thanked him profusely.  It's parked down by a blue tarp (who knows where that is) if I needed anything from the rig.

I was feeling so beat up, I went to bed early, only to wake up with a start at 11:00.  The rig is parked outside and it's RAINING.  There's going to be 4-5 cups of water on that bedroom carpet because I put the pans away, assuming (silly me) that it would be fixed.

So now I'm in a panic to get BACK to LaMesa this morning and get those pans in place before it gets any worse.  I'm totally crushed and defeated.  The last thing in the world I wanted to do was deal with stuff like this.

I'll be the blubbering mess of a human in the corner on the couch.