When you sit around all day doing nothing, you come across lots of totally useless stuff on television.  As the work crew began at 7:30 yesterday (wow ... that was early!) I decided to whip up the latest and greatest $50,000 prize winning recipe from the Pillsbury Doughboy.

Sadly, they don't exactly LOOK like $50,000 rolls and to be honest, they don't TASTE like it either.  Not bad though, considering they are made with those roll-containers that scare me every time I whack them on the counter to open the cardboard.  Actually, I haven't done that in probably ten years.

There's cranberries, pineapple, ginger, orange juice and ginger beer (although minus the ginger beer because I didn't have any), simmered and reduced to a paste.  I opened the roll of orange rolls, spread the gooey stuff on them, then rolled them back up and cut on the lines.  Baked at 400 for 14 minutes, I ate one right out of the oven.  Pretty much tasteless.  Wait for them to cool a little and they have MUCH more flavor.  Oh ... and smear the ORANGE frosting on top before partaking.  Next time I won't use quite as much filling. 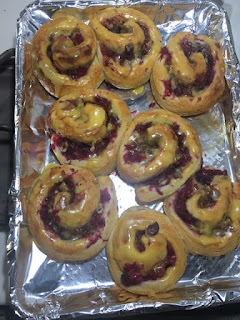 At least that kept me busy for a few minutes.  Not having heard from the Repair Contractor, I gave him a call, pleading for a space in his busy calendar.  I think I'm in love!!!  He called back and said he would be here sometime today to take measurements and see what he needed, with the repair possibly being done this weekend.  I don't even care what he charges me.

The back patio area is coming along very nicely.  This crew is VERY particular how they do the work.  It's amazing just how many tools and how much time it takes to do this.  There have been no voices in my head saying "you can do this yourself". 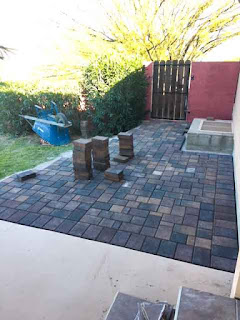 The rest of the day I held up in my sewing room, cutting out another 1,000 pieces for this new quilt.  So far I have one whole block sewn together. 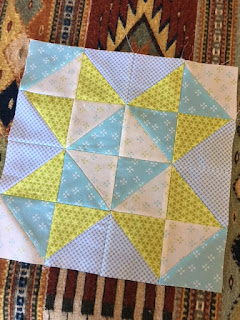 More good news .... Carlos called to say he's finished with the leak and the toilet repairs.  I can pick my rig up tomorrow after the seals dry.  Unfortunately, they have done nothing to the jacks.  That's how it goes sometimes ... seems you can never get the problem to be a problem at the repair shop.  It's okay though, because it probably saved me a few thousand dollars I'll be spending on the porch.

I'm not relaxing yet ... there's still Advil in my future ... but at least I can breathe a little easier today.