Some days I should never get out of bed.  Yesterday was a good example.  I got a call very late in the day saying the crew would be here to start the entryway paver project.  I was up and at 'em super early.  The guy showed up with the sand mixture at 7:15.  He dumped the load and left.  I waited.

And I waited some more.  By 8:30 I figured I would fix up some hummingbird juice for the kids who frequent my patio.  About the time I should have turned the stove off, the crew (and I use that word loosely) showed up.

By the time I got back in the house, the first alarm went off.  UH OH!!!  Smoke was pouring from the underneath the lid.  I grabbed the pan and took it outside to the lawn.  I ran back inside just in time for the second and THIRD alarm to start screaming as I ran from room to room opening doors and windows.   I hit the exhaust fan button, but it was too late.

The phone rang.  Surprisingly, it was my ADT alarm company.  I guess one of those alarms belonged to them.  I explained everything was okay ... but I was pretty happy to know if this ever happened for REAL, they would call the Fire Department.  Lucky for me, the Fire Department did NOT show up.

So tell me ... how in the world did a little sugar and water wind up looking like this?  It's black to the bottom and hard as a rock.  The good news is that my house now smells of caramel.  I'm not kidding ... a lovely wafting of sweet candy. 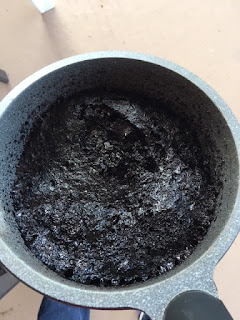 Back to the crew once the smoke cleared ... here's the walkway now.  I thought it was made the same as the back patio, where I removed pieces of flagstone with a shovel. 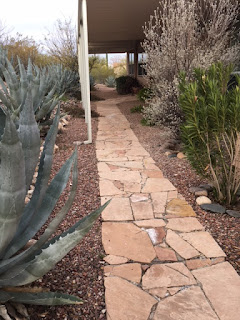 Come to find out, the FRONT had concrete underneath.  It took a jack hammer and one hour to remove this much.  That's when the boss showed up and was mad I told the guys to remove this.  His plan was to put the pavers right over the top.  Not a good idea in my book.  I checked the contract and he wrote "Remove flagstone from front".

Next thing I know, there's a knock at the door.  The kid was taking the tile off the top of the steps and said I had a HUGE scorpion problem.  Don't I know it!  Apparently all around the front steps he found dozens of the little creepy denizens.  I got out my pest spray and they soaked the entire area. 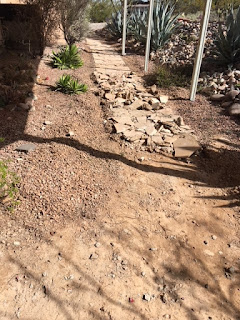 Around 11:00 I didn't hear anything, so I went outside to check.  There was no one in sight.  WHAT? Where did they go?  Maybe it was an early lunch.  By 12:30 I began to get concerned.  Maybe they all just walked off the job!!  At 1:00 they came back to work another hour before disappearing AGAIN!!

Hmmmm I forgot I was close to Mexico.  My 8-5 work hours just don't compute down here.  At least I know they will be back because the pavers showed up.  I crawled up on the trailer to take a look.  Hmmmm again ... they are supposed to be all the same size, mostly because it was a little bit cheaper.  I'm not telling them a thing.  I just hope they get it finished in under 30 days!! 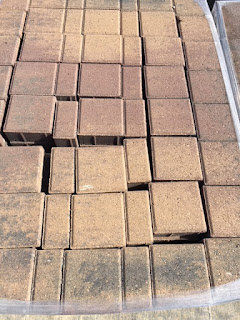 As to the RV ..... I called my man Carlos and got an answering machine.  I called the office, who called Carlos and got an answering machine.  See a trend here?  If I can sneak away today, I'll go get my cowboy hat (we're going to the rodeo and it's supposed to rain), the paint handle extension and see if I can locate Mr. Carlos, who apparently works the same hours as my paving crew .... AND have a free lunch.

By the way, if anyone asks, husband took his buddies to New Mexico in the motorhome.  He'll be back in two weeks.  I sure hope he doesn't have to extend his vacation!!