Can I Borrow A First Born?

I'M ALIVE .... but probably only for the time being.  I made it to the repair shop at La Mesa RV at the appointed hour.  Of course my service guy was nowhere to be found.  I tapped on one door and got a loud grumble, causing me to shut the door quickly.  Geez ... where's the smiling happy-to-see-you faces?

Every bay had a rig in it, and some had TWO.  They do get busy this time of year.  Although my plan was to wait, I towed the Jeep.  Don't you just love unhooking in front of a dozen people just waiting for you to make a mistake?  That's probably not really true, but I sure feel like it. 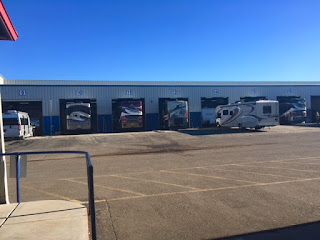 Carlos showed up and was friendly as can be.  We discussed the jacks not holding up, the toilet seal that needs replacing, including the fact that hardly any water comes IN to the toilet bowl.  I saw dollar signs in his eyes!  I explained how the water gets in under the seal, I just don't know exactly WHERE it is coming in.

I was then deposited in the waiting room where this sign is right in your face.  Good grief ... I need a first born to give them in payment!  I'd love to ask the repairmen exactly what THEY get paid.  I do suppose you have to add in free lunch, which by the way is now free to ANYONE according to the nice lady at the counter.  I'm thinking from now on when I drive to town, I'll stop in and thereby cut my grocery bill down a little. 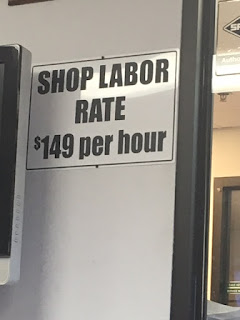 My poor baby ... I just love this picture of her in the snow.  I have been lucky not to have had any really bad problems with her and these things have been going on for awhile.  It's time to get her fixed up.  As you can tell, I'm still here, meaning I haven't heard one single thing about how much ANY of this will cost.  He promised to call, but like a used car salesman, he must have broken his finger, because Carlos did not contact me at ALL yesterday. 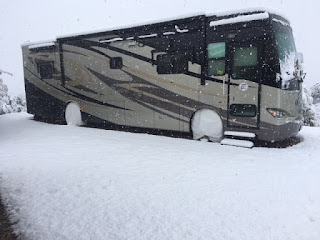 So while I waited at home, I painted the corners on half the ceiling.  I would have painted the walls too, but alas, I left my pole extension in the rig.  RATS!!

So instead, I put together one of three shelving units I'm putting in the garage.  Although I do have a variety of tools, I had to borrow the hammer from Mr. Chance.  He doesn't know it because he was gone.  My my, his garage would make anyone jealous!!  I can only dream. 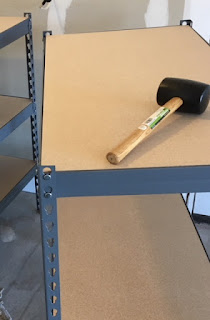 What I did was split one unit in half, making two work tables.  You know it wasn't me who thought of that, it was Dan's idea.  I've got two more bigger shelves to put together after I borrow a roller extension and get the painting done. 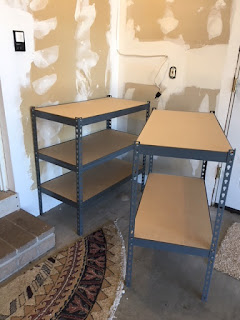 Trying to keep myself occupied, I planted the last of the cactus, discovered I really didn't need to repair the sprinkler line and spent twenty minutes getting paint off my fingers.  Then I tended to my forehead.

Why you ask?  Because when I was frying up that rasher of bacon, a huge drop of grease came flying out and hit my forehead.  It instantly burned a very deep hole in my face that has required maintenance ever since.  I know ... the weirdest things happen to me!!