I love playing card games.  When I worked for the County of Merced Building Division, four of us played pinocle every day at noon.  I actually won occasionally.  Poker however, seems to allude me.  I know how to play and I know how to win, I just never seem to get the cards.  There's always someone with a better hand.

I took this sunrise as a symbol of luck ... I was going to have a good day, mostly because I planned on doing absolutely nothing, not even leaving the house! 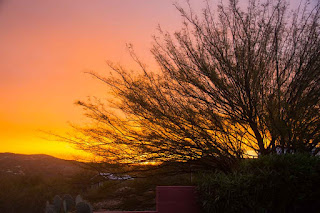 One couple hosts the party once a month, bringing the main dish for everyone.  The rest of us bring salads or desserts.  Something very easy that I didn't really have to cook was Italian pasta.  You just cut up all the veggies you want and open a can or two.  I did cook the box of pasta, but I never left the stove.  No use pushing my luck.

The dressing is even easier.  Open a bottle of Italian dressing and pour it on.  The balance of the bottle makes the best chicken marinade ever.  It was a winner. 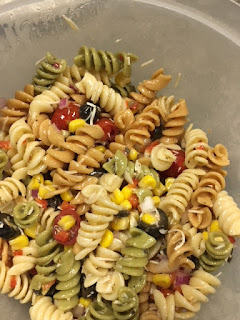 As for poker, there were seven playing Texas Hold'em in the other room and seven of us playing whatever crazy game came to mind.  With that many people, we played with two decks, making it rather interesting when it came to wild cards.

I won a big hand, then lost most of the night.  Finally playing Woolworths (5's & 10's wild) I hit FIVE ACES.  Woohoo!!!  You could hear me screaming down the street.  A few more hands and all those winnings were gone until we played Elevator, which brought me FIVE MORE ACES!!  I only won one other hand with five eights.  Winner winner chicken dinner!!!

For the first time ever, I came home a big winner of $8.10!!!  I doubt you will see me playing on TV any time soon however. 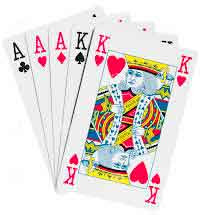 It was a fun distraction, but now we're back to reality.  As I went into the kitchen this morning I heard this horrible racket outside.  OMG!!!  It sounded like my heater/ac unit was blowing up.  I rushed outside to hear water on the roof.  Wait .... I was just out with the puppies and it wasn't raining.

I checked again when it finally dawned on me.  The work crew must have broken into the drip irrigation line and forgot to tell me.  I raced over to the control panel and shut it off.  The racket stopped.  Thank goodness ... I really cannot deal with anything else going wrong!!

I keep staring at this sunset image in the hopes it will calm my racing heart.  Maybe a margarita would work better!! 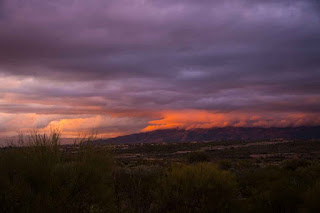 Thank you thank you to the readers who told me about Do It Yourself Pest Control for scorpions.  I'm calling them first thing this morning!!!

Keep your fingers crossed I find someone to fix the porch!!!