At long last, California is getting a little rain.  Definitely not LOTS of rain like Arizona, but three days of light rains and mist.  Probably not enough to help with the fires, but enough for me to finally turn my sprinklers off.

It has been just enough to clear the air of the horrible smell of fire, making it breathable again.  It was getting so bad I was almost on the verge of wearing a mask.

To add to that, for which I am VERY thankful, it means the temperatures have risen from 36 to nighttime lows of 65 with NO heat required.  My PG&E bill will be as low as it goes.  Of course all this baking I've been doing will NOT help.

Two more pies were in the works yesterday ... another apple pie tart and this pumpkin, made from scratch.  Well almost.  It's not like I went out and picked a pumpkin or anything.  For some strange reason I found a can of plain pumpkin that wasn't outdated, languishing in my cupboard.  I had all the spices and figured I would give it a shot.

My crust is a little wonkey where I smashed it while pouring the filling in the pan, which was already in the oven, but I didn't care.  The most important part looked just fine. 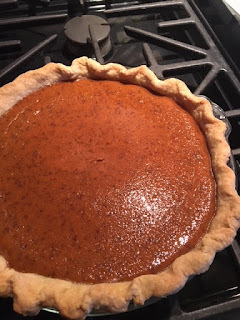 Dinner was at 4:00.  I arrived right on time.  I love my friend Diane, but her cooking skills (believe it or not) are a tad bit lower on the scale than mine.  The only thing done was the turkey.  I tried to help by opening all the cans on her counter, but the can opener defied my task at every turn ... literally.  I'm buying them a new can opener for Christmas!! 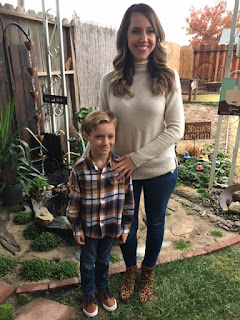 Loaded with marshmallows, the sweet potatoes went in first, followed by a green bean casserole.  The stuffing "box" on the counter required cooked celery and onions, which we quickly dispatched.  Since Diane never makes gravy, I dumped the juice from the turkey into a pan, added a few small pieces of meat for flavor and whipped up a rue.  Instant gravy ... I was just praying it did NOT taste like flour.

In between tasks, Mr. B (Braden) wanted a space ship, but was not allowed to use scissors.  Everyone was too busy, so I borrowed a little pocket knife and went to work on his box, after he drew on exactly where he wanted me to cut.  It took four times to get the head hole large enough. 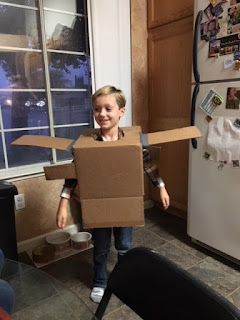 Suddenly, he turned into Buzz Lightyear, flying around the living room!!  There weren't going to be any bad guys interrupting OUR turkey dinner!!  Shhh don't tell anyone, but he's going to Disneyland VERY soon where he'll get to see Buzz in person!! 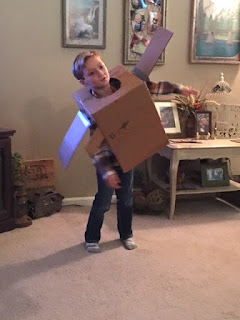 As usual, try as I might to take the smallest portions, I was stuffed to the brim and miserable in no time.  I hate it when I do that!!  Then it was dessert time.  I had two of the smallest slices, but it was overload city.  The pumpkin pie was delicious.  The apple tart was even better.  Together, they were terrible.  Note to self ... next time just pick one!!

I rolled myself out to my truck, drove home and rolled over to the couch where I sat until I fell asleep.  This morning I'm just as miserable as I was last night.  It's time to get out and walk it off, except wait ....... it's raining.  It's as good an excuse as can be to remain on the couch!!

I'm happy to report, after hitting the test and reset button four times on the garage GFI, the outside security lights came on.  No reason to set the alarm, then wake everyone up at 4:30 when I let the dogs out.

As for Black Friday, I missed it.  Darn.  No walking a mile across the parking lot and fighting with people over $10 sale items that normally sell for $5.  No worries ..... Cyber Monday is almost here!!!