By now I had forgotten all about the four-wheel drive excursion through the goldfields of Columbia to arrive at my destination.  Honestly, I had expected a huge winery of the Napa variety.  Instead, I ended up at a remodeled barn turned kitchen .... the biggest one I've ever seen.

Looks can deceive ... no matter what his classes are about, he sells out every single weekend.  On to pies!

It just dawned on me that the pastry he is making for the linzer tort used eggs and almond flour.  He mixed up the entire recipe with his little white scraper.  I have always been told to never work the dough much at all.  He rubbed it into the table like a masseuse. 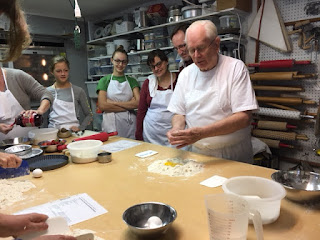 Next up was the dough for apple pies.  It too had an egg and was smashed together by the lady on my left.  Once all the dough was mixed up, we let it rest on the counter for 30-40 minutes.  That must be the secret!  When we returned, he handed me that huge red rolling pin and said to roll one out.

I used twice the flour my Mom would have used and rolled from the middle out.  I can't believe it was so easy to do and actually came out round.  I ran the roller over the top of this fluted tart pan and cut off the extra.  It was magnificent!!! 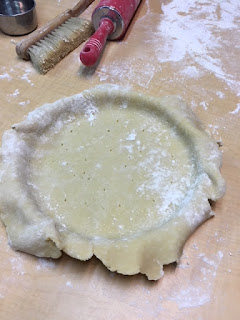 THIS is the outcome.  A beautiful linzer tort!  What's in it you ask?  You're not going to believe this one.  We mixed up a huge bottle of plain raspberry jam with Ronrico Rum and poured it in.  Then he rolled out the extra dough and used a pizza cutter to make the lattice.  After brushing with egg wash, he baked it until done.  How long is that?  Until it's DONE he says. 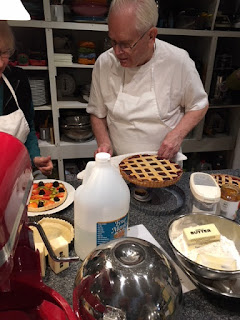 Next he dusted it with powdered sugar.  LOTS of powdered sugar.  I truthfully could not imagine this tasting that great, but it was over the moon delicious.  Perfect to serve (and impress) at that next huge Christmas Party you are having. 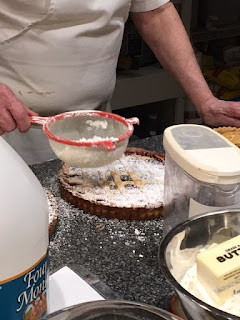 While all that was going on, we whipped up a pastry cream worthy of doughnut filling.  That was dumped into one of the tart pans with a pie shell we pre-baked.  Then we cut up strawberries and kiwis, along with the biggest blackberries I've ever seen. 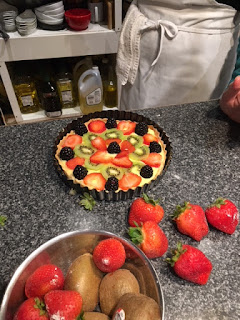 That was covered with an apricot glaze made of ... you guessed it .... apricot jam, a quarter teaspoon vinegar (?)  ... yes vinegar, and water.  How simple was that!! 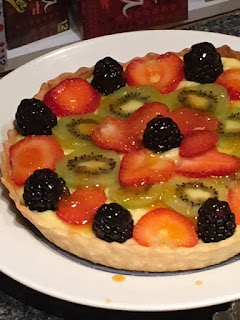 In the meantime, we took chunks of dough from the 15 gallon pot he had mixed up and rolled it out for apple and mixed berry pies.  He actually used the cheapest can of apple pie filling he could find and mixed it up with cinnamon and lemon extract.  If you want to enhance the flavor of your pies, use lemon extract.

Next up the berry filling.  It's just a mixed bag of frozen fruit (blueberries, blackberries, etc.), along with a healthy dose of sugar mixed with a kind of cornstarch you don't have to cook to get it to thicken.  Yup I'm buying a bottle of THAT stuff!

So here was my berry pie, made in one of the small aluminum pans.  My lattice isn't so perfect, but let me tell you ..... that's the best piece of pie I've ever eaten in my life!!  I absolutely could NOT believe how flakey the crust was, not to mention the filling had more berry flavor than you can imagine. 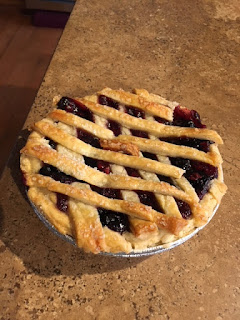 I know this is long .... but next up we had to make the flakey pie dough ourselves.  He gave me a bowl full of flour in front of a huge mixer.  I dumped it in, along with some crisco (the cheapest you can find) and crisco "butter" flavor, or you can use a cube of butter.

I actually mixed it up using the dough hook.  Who knew you could do that?  In no time, I had it safely tucked away in a zip lok bag to take home.  NOW he says ... you teach everyone else how to do it.  Oh great .... I'm not THAT confident in my skills, but I gave it a shot.  It's okay .. they won't be baking that until they get home and I will never see them again!!

As I mentioned, 11:00 was wine time, and by now it was 12:30.  We all sat down at the table with three or four pieces of pie each and marveled at what we had created and how delicious it was.

I was so excited, I signed up for this weekend's Scandinavian Food cooking, including salt blocks.  I have no clue what that is, other than I used to set out salt blocks for the cattle years ago.  This will be another adventure.  I think I will drive the much smaller JEEP.

Now all I had to do was figure out how to turn around my too-big truck in the too-small driveway.  I hoochie-gooed around about nine times, moving 12 inches at a time until I was finally free to bounce and bang down the driveway, hoping my little pie didn't spill all over the seats.

All the way home, I worked on a list of the supplies I would need to recreate THE pie.  But wait ... he mixed up the dough, so really, I have no idea which recipe he used.  It was the flakiest I've ever eaten.  I HAVE to figure this out!!  Alas it is going to take me more than one try.

We'll talk about it tomorrow!!

One more thing ....... THANK A VETERAN TODAY FOR YOUR FREEDOM.  We wouldn't have it without them!!!