I'm sure everyone has a story to tell about their bank.  Especially RV'ers who are on the road a good portion of the year and rely on on-line banking services.  I held out for a very long time before I actually believed I wouldn't lose all my money by using the internet instead of going in person.

I finally relented and signed up with my local branch using Bill Pay.  Are they all the same??   So far (knock on wood) I haven't had any major problems with not one, but TWO different bank accounts.  Feeling pretty smug, I added a third.

My rationalization was that it would be easier to have three separate banks to account for things like rentals and health insurance payments.  All was going swimmingly well when all of a sudden I got an email saying one bank was going to UPDATE their entire program.

Ohhhhhhh that doesn't sound good.  They advised I make copies of everything, including my last five or six statements.  It all went okay until I realized a month later that my health insurance payments were not being processed.

I spent a couple of hours on the phone with both the Supplemental Insurance Company and my banks ... that's plural because the account decided NOT to accept the automatic deposit from the OTHER bank.

Three days and multiple phone calls, not to mention trips to the bank and it was finally cleared up.  Money goes in and money goes out.  I could finally relax.

Or maybe NOT!!!  About that time I got ANOTHER email from my second bank saying I should copy everything, including all my Payees because they were going to upgrade their Bill Pay program.  OH NO ..... that doesn't sound good at ALL.

This was my BIG account with many, many payees.  In order to copy all of that info, it would have taken me at least an entire ream of paper and hours at the computer.  I finally figured out how to copy just the names, hoping only a few might be missing after the turnover.

Boy was I wrong.  Absolutely every single Payee disappeared.  By the time I figured out how to even USE the new program, I discovered both of my biggie payments ..... house and RV ..... had not been paid.  YIKES!!!

Luckily, my house payment people were nice as could be, giving me an extra 20 days to get a check to them.  My Bank of America people could have cared less.  I was LATE!!  To make it even worse, B of A had decided to go paperless without telling me.

That's when something really weird happened.  I couldn't find ANY of the paperwork from where I had paid bills for the last six months.  What the heck?  Where did it go?  Was I sleep walking and threw it all away?  I searched for hours and found only the house payment bills.

Almost eight hours later, after going on-line to each and every account I have, recording account numbers and mailing addresses, I was able to set up a minimal version of Bill Pay.  Another hour trying to figure out how to make automatic payments and I was finally comfortable enough with the thought everyone was going to get paid.

I have absolutely NO faith that is going to happen however.  I'll be checking constantly for the next couple of months to be sure all is going according to plan.  There is ONE improvement with their new plan .... they can send you an email when your payment has been made.  I checked the box for my major expense payees.  Hopefully I can rest easy ... at least until next month!!

In other exiting news, do you know what this is?  It arrived yesterday and I'm super excited.  It's a whole new adventure ... well maybe.  I'm not sure if I'll be brave enough, but I'm going to give it a shot. 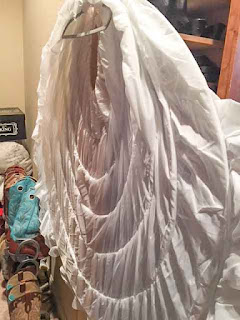 There is more coming that will hide this entirely.