The rest of the Scandinavian lunch we prepared was a little more edible in my book.  I've never been a fan of pickled anything.

Norwegian meatballs ... half beef, half pork with onion and nutmeg.  Throw in a few bread crumbs and you're done.  Simple ingredients seem to be the best.  Once both batches were cooked about halfway he set them aside.

That's when the "chef" (I use that word loosely here) in the group came over and ate one.  Uhmmm that was only HALF cooked my friend, as in raw in the middle.  Bet he won't do THAT again!  The REAL Chef made white gravy with the drippings, flour, chicken broth and a little milk, then dumped the meatballs back in the pan and simmered them until done. 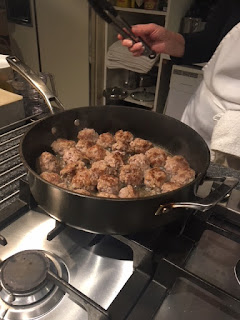 Next up, Jansson's Temptation.  I LOVE potatoes, so when they asked me to peel and grate some russets, I was all over it.  That will be one more thing I can eat ... or so I thought.  Grate half in a casserole dish, cover with onions, then lay in an entire tin of anchovies.  I admit, I threw up a little right then.

Why ruin such a great dish with gut-filled nasty tasting fish??  I spread them out, leaving a large corner empty, which I hoped to be the first to scoop out.  Over that, more potatoes, then a cup of cream.  Bake.  I said a little prayer that the fishy fish didn't bleed over to my little corner.

Next on the menu ..... tomato salmon.  More fish, but I was SURE this would be good eats.  Mix a tablespoon of tomato paste with a cube of butter and spread on the salmon before baking it in foil.

At long last, lunch was served.  On the bottom you see another bread made with potatoes and flour, called Lefse.  It sounded kind of like potato pancakes, so I gave it a try.  Somehow the butter and sugar mixture on the lefse didn't quite go with the beautiful salmon next in line.  The meatballs looked delicious, followed by the not-so-tempting Temptation and more gravlax in case you didn't get enough the first time around. 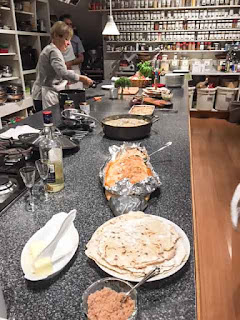 As you can see, MY plate wasn't very full.  There WAS two whole beet slices there (I actually ate both), sitting next to Jansson's Temptation, which unfortunately for me had a HUGE piece of anchovy in it, spoiling the entire dish.  I ate it (literally holding my nose) and downed the last of my glass of wine.  The meatballs were yummy, as was the salmon and the rectangular piece of Tunn bread. 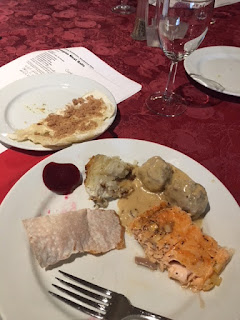 I forced down the sugar covered potato bread and cleaned my plate.  As I looked down the table, everyone else took small portions also, but they included pickled herring.  Just the thought gives me shivers.  There was one more thing on the table ... something called Aquavit.

Here's the recipe.  Cheap vodka, one tablespoon of fennel seeds cracked and half a tablespoon of lemon juice.  Set it on the counter and shake it once a day for a total of three weeks.  At the end of that time, fill it to the top with MORE cheap vodka and let it sit for one week.  Serve it in cool little glasses.

I'm sorry to say I cannot tell you what it tasted like.  I'm doing good if I can get a glass of wine down.  That hard liquor is just not for me.  And so the Scandinavian lunch came to an end. 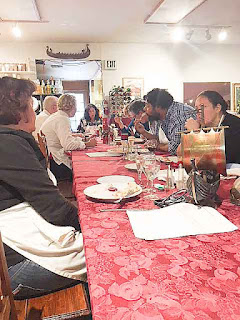 But WAIT!!  What about the rice pudding you ask?  Butter, rice, milk, sugar.  What could be better?  It cooked in the pot with someone stirring it for about 90 minutes.  They tell me you can do it in a slow cooker without having to stir it every second.  When thick, add in vanilla.  It was the perfect ending to get rid of all that fishy taste in my mouth.  I ate a HUGE bowl!! 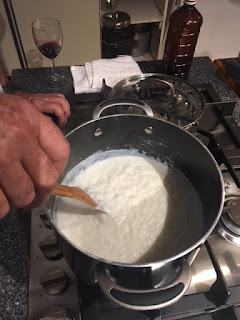 My stomach gurgled all the way back home.

Undaunted, there are three more classes I want to take.  Fondue with vegetables, meat and bread (only if someone cancels) ..... Soups (which I rarely make) .... and Swedish Pancakes with syrup and powdered sugar.  Now THAT one HAS to be the best on the list.