My Masterpieces May Be Cemetery Material

Okay folks, it's time to put that pie dough to good use.  I had two huge rounds of dough I brought home from the class.  Having kept it in the fridge, I set it out to warm up.  That took some time, since my house is only 65 degrees inside.  Temps have been in the low 30's every night.  Next ... on to the apples.

THIS is the greatest thing since peanut butter!!  Have you ever used one?  Whoever invented this contraption is a genius.  It peels, cuts and cores apples in a matter of seconds.  Literally seconds!!  I bought it from Pampered Chef on a whim. 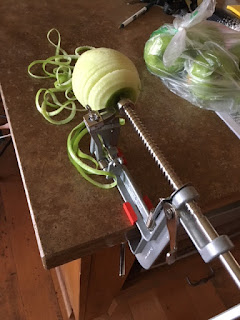 Dump them in a bowl and cut the apple in half to get perfect slices for the amazing pie I'm about to create.  You need a couple tablespoons of lemon juice to keep them from turning brown.  Uh oh ... my juice was outdated.  I used it anyway, adding in a touch of lime juice which I had three bottles of.  Why, I have no idea. 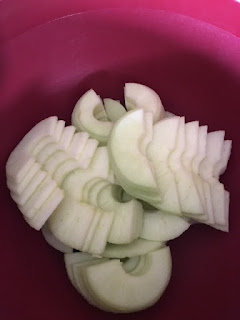 Crust time!!  I used a spray bottle to add a little moisture (a great trick) and rolled it out.  I was thinking it was rather hard to roll, but chalked it up to being cold.  I rolled and rolled and rolled some more.  I think I need one of those big heavy Costco rolling pins.

I carefully loaded it into my deepest tart pan ... the kind where the bottom comes out.  It was beautiful, although a little thick in places.  I should have rolled it some more I suppose. 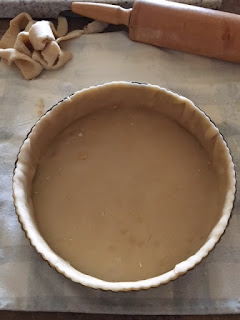 I dumped a cup of sugar into the apples, along with cinnamon, nutmeg and a touch of flour.  I would have added the lemon extract, but alas there was none in the cabinet.  Now for the top crust.  I wanted to make a caramelized onion and cheese tart, so I opted for a crumble on this one.

Super easy .... mix up chunks of butter, flour and brown sugar.  I wish I had those little scrapers.  It might have been easier than using a fork to break up rock hard butter. 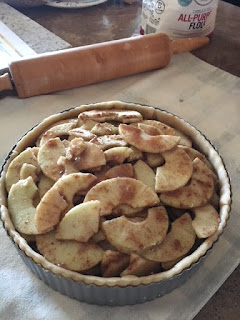 Fifty minutes in the oven and it looked done.  I did a knife test.  Nope .... apples not soft.  Another 15 minutes and they STILL weren't done.  At long last, another ten minutes and it was out of the oven.  It looked good .... even the pie crust looked done, although kind of thick in places.  I'll let it cool. 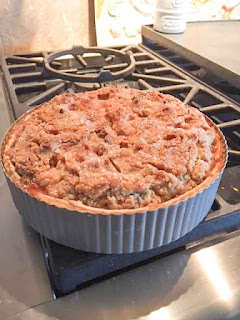 In the meantime, I used the second round of dough for the onion/goat cheese tart.  I admit, goat cheese is NOT my favorite.  It's WAY too strong for me but the one we made at the school was delicious, so here goes.

Cream cheese, onions, goat cheese and cream.  Hmmmm he made one recipe for TWO crusts and I only have one.  I pre-baked the shell, having filled it with aluminum foil and beans, to keep the crust from shrinking.

Hmmmm again.  Somehow I don't think I baked it enough.  Oh well ... I AM following the directions.  I filled the shell with the ooey gooey filling, adding in sun-dried tomatoes for a little more flavor.

I let it cool slightly, removed the ring around the side and got ready to taste something DELICIOUS!!  Or not.  The crust didn't get done at all.  It's completely raw underneath and only partially cooked around the edges. 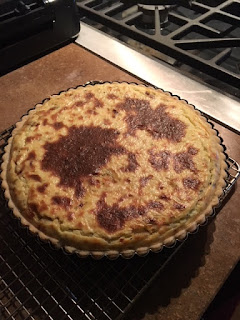 To counteract the goat flavor, I removed the ring from the apple pie and cut a nice large slice.  It will take that much to get the goat out of my mouth.  I smothered it in caramel just in case it wasn't sweet enough.  THIS is a winner, however I must admit, the crust needs salt and a little bit of sugar.  Either use salted butter (which I did not at the school) or put salt in (which I did not do either).

Also a tad bit too thick, the crust is otherwise pretty flakey.  So now it's not about the recipe or rolling out (well sort of, I need to make it thinner) ..... it's about the cooking time.  That's why Chef Ron said to cook it until it's done.  But how do you know???? 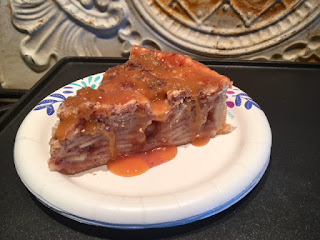 Next up will be the berry pie, when I buy the berries and make the crust totally on my own.  Keep your fingers crossed ... I'm going to need lots of help and good luck.

I'm off to the garage for the shovel.