Have You Thrown YOUR Lettuce Away?????

I'm big on salad.  During the summer, I actually have two small salads every day.  In the winter, I opt for salad at lunch.  All that chopping and hacking isn't my idea of fun, so I buy the bagged kind.  Chopped Caesar salad or some kind of Asian variety fits the bill, with all the ingredients including dressing, right in the bag.

What an invention.  Someone figured out how to charge us probably twice the cost for half the ingredients.  Everything was hunky dory until I heard the latest news.  THROW AWAY YOUR LETTUCE.

There have been other scares about foods that come from Mexico, but never ever (that I can remember) has the CDC (Center for Disease Control) told everyone to throw away every shred of romaine lettuce.  It doesn't matter if it's a head of lettuce like pictured here, or the shredded kind in my bag-o-salad.

Apparently there is a bad variety of E. coli bacteria present that is actually killing people.  I have to admit about two weeks ago I did get very sick after eating salad at two meals, but I never thought it was because of the lettuce.  I've been hanging on to two bags, hoping the CDC will figure out the source. 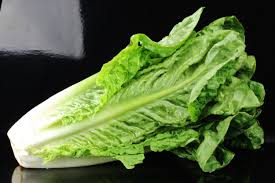 I guess that's not going to happen any time soon, and now my bag-o-salads are wet and slimy inside.  Reluctantly, I'm throwing out $7.99.  I'm going to miss that staple part of my diet.  I guess I better look into cabbage salads.  If you haven't done it, THROW AWAY your romaine lettuce.

If you would like to have a replacement for that lettuce and happen to be in Meridian Idaho, a suburb of Boise, stop in at this bakery.  It has a rather weird name .. Cinn-Nom-Nom Bakery ... and has just opened.  My nephew's wife (does that make her my niece or my niece-in-law?) started this enterprise by buying up all the bakery equipment she could find on E-Bay and stashing it in their garage.

I give her credit for doing much of the work herself and going headlong into an endeavor that everyone has told her won't work, especially when you have no money.  So maybe if all our friends and relatives show up and buy goodies, it will be a success.  At least she doesn't have the propensity to burn her pies like me.  They serve breakfast and lunch items, pastries, cinnamon rolls, cakes, pies, cheesecakes and cookies. 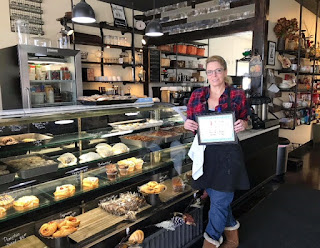 No one does this any more, but I thought it might be fun at the RV rally in January.  I have a couple of recipes, but would MUCH rather try someone else's first.  Hopefully there is a cancellation and I can get into the class.  Otherwise, it's just going to be me experimenting with the cheese.  Anyone have a trusted recipe? 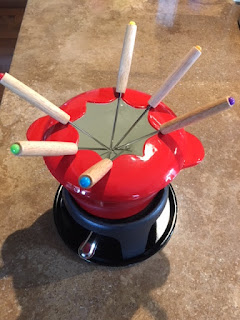 I went for a nice walk yesterday.  The rain quit and I ran out of excuses.  When I got back, I was disappointed to see I had only gone .79 miles.  Apparently two Thanksgiving dinners in a row set me back.  I've never felt quite this bad after overeating and I didn't even TOUCH a salad.

That's when I found out my credit union, who decided to switch to a new Bill Pay program, erased absolutely everything in my account, including the automatic payments for little things like my house and RV.  I'll let you know how that turns out as soon as I can get someone on the phone.