It finally got down to 64 degrees in the house, so I had to light a fire.  It's much cheaper than running the heat pump.  By light, I mean push the button on the remote control.

By the way, did you know that PG&E in California got a bill signed by good old Governor Brown, that says fires caused by THEIR equipment and causing damage, will be paid for by PG&E customers?  This includes that terrible gas explosion that killed people and caused billions in damages if they can prove they took "reasonable" care for it NOT to happen.

PG&E equipment started at least 16 fires last year, one of which destroyed 4,000 homes.  Guess who's going to be paying for all that?  Their reasoning?  It's all due to the climate change, not their faulty equipment.

They will be authorized bonds to pay for all the damage, then will pass the cost of those bonds on to all their customers in California by adding it to our bills.  Nice, huh?  I know, get out of California.  I'm working on it!! 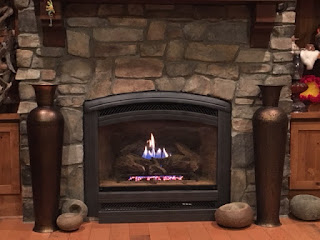 Now I have an even bigger headache than I did all last night long when I tried to get some sleep.  When I say I have weird dreams, I mean they are off the wall.

This time I was a spaceship mechanic.  I seemed to move around a downed aircraft with ease, looking for the pilot who came floating in.  I thought it funny that I would know how to change the blasting nozzles, but I just knew.  I unscrewed the valves and replaced the filters, having the pilot do a test shot.  It worked, although not with as much pressure as I expected.  Still, liquid stuff came out the end, enough to kill whatever it touched.

A job well done.  As I wandered off, I was trying to interpret some very fuzzy pictures of a dog standing on two legs on top of a fence, with a small boy behind him.  The next pictures seemed to be of some men about to steal something.  How did I know that just by looking at the picture?

I woke up ... thank goodness .. with this terrible headache.  Time for a little caffeine and advil!!

I did forget to mention about Bingo on Tuesday.  The Paradise Elks Lodge was burned to the ground, along with every other building in the small town.  Everyone who survived is now trying to get by in the also small town of Chico.  We decided to send all our profits for the night to the Chico Elks lodge to be used for those families.

In fact, almost the entire Northern California area has sent tons and tons of supplies, clothing and cash to help them recover.  I wonder if this was a PG&E created fire??

At any rate, I have had company for a couple of days, causing me to finally cook a real meal.  When in Costco I spotted a delicious looking corned beef brisket.  I've never cooked one to perfection in my entire life.  They have always been tough.

On this day however, I cooked it for a total of nine hours.  SUCCESS!!  Too bad I forgot to take a picture.  I was so excited it was edible, that I cut it up, we ate half and put the rest away before I realized I had nothing to show for it.  You'll just have to take my word for it, it was pretty tasty!

My next project is to figure out how to mount a trail camera behind my rig where it can't be seen, in the hopes of catching whoever thinks they can steal my diesel.  I'm pretty sure it will work well at the top of my horse corral.  Worse case, I suppose they could steal the camera!

I tried to get REAL cameras installed, but they require a solid continuous internet connection, which I do not have.  The cell tower variety will cost over $2,000.  I'll let you know whether it works or not.