Ever have one of THOSE days???  I'm hoping all of this stuff happened at once so I can get it out of the way.  Otherwise, I'm in BIG trouble!!

After half way washing the rig and getting stuff packed, I checked most everything off my list.  Time to hook up the Jeep.  DRAT!!  Low tire light.  I drug the heavy air compressor out and plugged it in.  I'm sure the neighbors loved me, it's so loud.

I used the tire pressure gauge to check before filling.  All it said was Lo .. meaning it needed a new battery.  Really, I don't have time for this.  I found another one in the truck.  Finally I'm ready to hook up.  Ever since being repaired in Indio, this hitch is the pits!  It's so stiff and tight, it's hard to move at all.  I used my knees, as I do with everything I'm trying to move.

That's when DISASTER happened.  All the wires pulled completely out of the plug on the rig.  OH GREAT!!!  Of course my first call was to Mr. Chance, but alas, he was in the dentist's office.  I looked on-line for a schematic, but they were all for six or seven wires.  I only have four.

I called my backup, Bingo Buddy Mark.  He pulls a huge fifth wheel and is a GREAT handyman.  Until he arrived, I messed with it totally guessing where stuff went from all the pictures on the web.  I actually did pretty good, with only one of four in the wrong spot.

Still, I have no right turn signal on the Jeep.  Something is wrong, but apparently it's on the Jeep side.  I'll  have to fix it later as I was already two hours late.  I took a picture so I will know where the wires go next time. 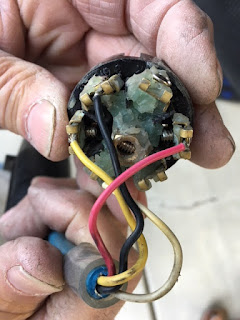 Traffic was terrible.  I rarely pass anyone, but on this day every slow vehicle in the State was in my lane.  My mind wandered as it does driving down the highway.  No worries about fuel, I filled up just 20 miles from home on my way back from Arizona.

I glanced down at the gauge.  WHAT?????  I have just over half a tank.  How is that possible?  I haven't driven it at all!!  That's when it hit me.  Someone siphoned fuel from my tank ... and the only someones who know how to get in my back yard are the GARDENERS!!!!!  I was instantly enraged.

I already had to pay a kid to take the lawn clippings OUT of the trash bin because the Trash Company won't dump it otherwise.  Not once, but TWICE, even though I wrote all over the top of the can NO GRASS NO GRASS NO GRASS!!!

They also cut my landscape lights again and no matter how many times I have called, they have NOT called me back.  I'm going to let them keep going for another month and I'm NOT PAYING THEM!!

Calm down dear, it doesn't help at all to get mad.  I pulled in at the next Pilot station for fuel.  That reminded me to check on that last purchase.  I paid for $230 on my credit card, but it only took $178. I needed to be sure they gave me the credit back.

I about came unglued.  Could it get any worse?  They charged me the entire $230 with NO credit.  This is officially the worst trip EVER!!

Finally over Tehachapi Pass, I cut North on Highway 14 to the big city of Ridgecrest.  My how you have changed.  It was nothing but a few houses and a gas station way back in the day when I was here as a kid. 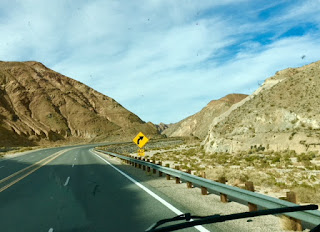 So the reason I signed up for this rally was to view the Petroglyphs at the China Lake Naval Air Station.  Having received my clearance after much paperwork back in September, I was looking forward to it until I ended up working all of October.  Now I'm pretty beat up, and another two hour hike doesn't sound so good after all. 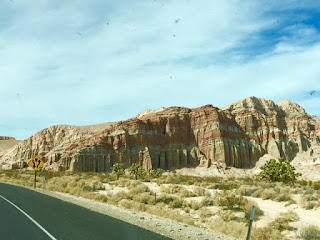 I finally arrived in one piece at the Ridgecrest Elks Lodge.  Our small group of 15 got smaller as one rig got in an accident and one blew out her hip ... ouch!!  With mostly new members, I only know four of the group and feel rather out of place.  Time to make new friends. 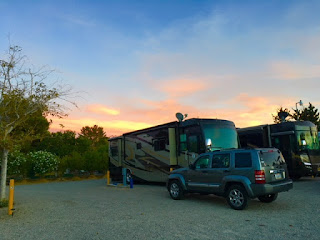 The puppies and I went to bed early.  I knew 4:30 would come quickly and I was VERY tired from driving 5-1/2 hours to get here.

On today's menu .... Trona Railroad Museum (it was a company town, now apparently a welfare town) and the China Lake Naval Weapons Museum, if they let us in.  I think I can sneak in a little snooze from 4-5:00.