It's pretty sad when the weatherman can't figure out if it's raining or not.  I mean really, all you have to do is step outside to find it pouring.  Here's the question mark I discovered a couple of days ago.  It's BAAAAACCCKK!! 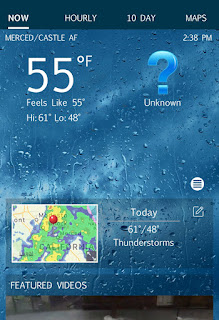 With rain coming down in buckets and nothing on television but Christmas Movies, I decided to whip up a couple of dishes I've been wanting to try.  While at the cooking class making rice pudding, which took something like an hour of stirring the pot on the stove, someone mentioned OVEN risotto.

A little history first ....  our ranch basically went under when the cattle market bombed in the late 60's.  You see when you sell cattle at 35 cents a pound and you paid 50 cents a pound, then spent all summer feeding them, you go broke.  We weren't the only ones.

We had a neighbor who insisted we could grow rice, selling it directly to Russia.  That's right, Russia.  Heck, if it will save the ranch, why not?  And save the ranch it did, as those big payments were made right on time.  Not only that, but we basically ate rice three times a day.  It was cheap food!!

Then along came the government who said we couldn't sell to Russia any more.  They actually made it against the law.  Luckily we hooked up with another processor who had direct markets in Japan.  Funny thing about Japan ... they will only purchase a particular type of rice.  Our processor developed his own strain, one they loved and we were back in business.

As with all things commercial and overseas, that market finally dried up.  We all went to work outside the ranch selling real estate, life insurance and working for the County.  It was the end of ranch life as we knew it.  In the meantime, I had become addicted to rice.  I LOVE the stuff!!

After checking out Ina Garten's recipe for oven risotto, I decided to give it a shot.  Easy peasy.  Put rice and chicken broth in a cast iron pot and put it in the oven for 45 minutes.  Take it out, stir in parmesan cheese, salt, another cup of broth and peas or mushrooms, or maybe both and there you have it.  Risotto.

It came out perfectly cooked and I didn't have to stir it for hours.  That's when I discovered I really don't like risotto.  It lost all of it's "tooth".  It was also WAAAY too salty.  Definitely leave out the salt. 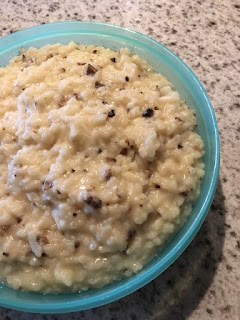 Now, what to do with that last cup of arborio rice.  How about making rice pudding like at the cooking school?  This I actually did have to stir on the stovetop for about 30 minutes.  A real pain in the patoo ... but it was worth it.  Even when I used 2% milk (in spite of chastising by the Chef), it tasted wonderful ..... when it was first cooked.  Later on, not so much.  The nice texture was completely gone when it cooled. 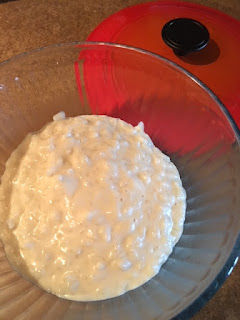 It was still raining as I wandered around the kitchen bored to tears, trying to come up with something else I could cook.  I was on a roll.  How about Christmas fudge??  I'm not really a fudge eater ... that's too much sugar even for me ... but figured I could take it to Bingo.  They will eat anything!

I have the simplest recipe ever ... two ingredients!!  I'll show you that one tomorrow.

In the meantime, it's still raining and I'm SO sorry to say I think I'm getting sick.  That darn girl at Bingo came two weeks in a row, sick as could be, coughing and hacking all around us without covering her mouth.  I was so mad I told her to GO HOME!!  It was too late.

This morning I have a sore throat and runny nose, which doesn't bode well for me.  I truly thought I might slip by again this year without being sick at Christmas.  I'll be on the couch after gargling everything caustic I can think of to cure this malady.