Costco Can Be Detrimental To Your Health

I always go to Costco with a list.  It doesn't help much.  There's so much good stuff, how can you possibly pass it all by??

My TRUE reason for going there was to check on the variety of ice cream they had and to procure bowls, napkins and spoons for the RV Rally.  I never even SAW the ice cream, let alone THOUGHT about it.

Instead, I cruised the dessert aisle.  I was so proud I passed by everything!  Not one single desert in the basket.  Then came that refrigerator section where they have everything for a turkey dinner, already cooked.

Suddenly it dawned on me that Cooper was out of chicken.  Those prepackaged cooked turkey breasts might be just perfect and CHEAPER!!  I bought two.  THEN I spotted the corned beef, packaged all pretty with lots of salt.  Just what I needed for my crampy legs. 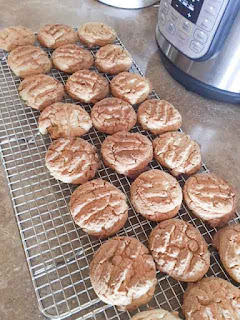 The spoons and napkins were next in the cart.  The only bowls were WAY too big and VERY expensive.  I'll pass on those.  The next thing I know, I've got a box of biscotti, naan bread, gruyere cheese, pork tamales and a huge container of mac and cheese piled up in my cart.  Where did THOSE come from???  Someone was putting stuff in my cart!!!!!

Time to steel myself for the grand total.  It's heart attack time at Costco.  Did I not try to buy very little?  It never fails, the total is ALWAYS over $200, no matter how few items are in the cart.

Oh ..... and of course my membership was due.  $60 for one year.  In the old days when I was married, it was $40 and easily justifiable.  Nowadays, I seriously doubt I save that much since I rarely shop at Costco.  Once I got over the shock of $274.63, I ran my plastic through the little machine.  It's only money!!  At least I will be reimbursed for $51 worth of rally supplies.

Just so you know, their mac and cheese isn't good at all ... and now I have about three quarts to eat.

When I got home, in order to help balance my checking account, I got on the phone and cancelled Syrius Radio in my rig.  At $20 a month, it's getting too expensive for the joy of listening to music as I drive along for maybe 6 months a year.  Not only that, but did you ever notice they play the same music over and over and over?

I've been a subscriber for seven years and I'm still listening to the exact same monologue and tunes as I was when I got it.  I think I have a few CD's around here that I can play over and over just the same.

Of course it took me 30 minutes on the phone with the representative to cancel it.  I tried to hang up, but she said I had to listen to all of the offers they had, before she could process the cancellation.  Really?  Okay ..... GO!!

We will send you a radio where you can listen all day long at home.     NO

We will include the radio in your home AND the discount for two years.      NO

At long last after three more tries, she agreed to cancel it for me.  I was put on hold.  Ten minutes later, she came back with one more offer, whereupon I told her NO MORE OFFERS.  I want to CANCEL.  At last, a cancellation number.  Now if I can only find those CD's.

Somewhere in there I went to my dentist for teeth cleaning by a new girl.  Seems the third one I've used has retired.  Gosh, it takes me TWO years just to train them.  Surprisingly, this one did pretty good, saying I got the Patient Gold Star for the day because my teeth were in such good shape.  YAY!!

Since I was on a roll with the "NO" word, when she asked about x-rays, I said NO.  I have no insurance and it's cost prohibitive.  Maybe next time (that's code for maybe in four years).

Since I had such clean wonderful teeth, I figured I might as well sink them into something delicious ... like peanut butter cookies.  That's where the above picture comes from.  The oven gave me fits, but I finally got three dozen edible ones.  They will come in handy when I fire my gardeners next week.  That's tomorrow's story!!