That's the burning question when it comes to my truck ... or the rig ... or just about anything, come to think of it.  Maybe it's just where I live, but believing someone and having it be true around here is like finding a unicorn.  It's a rare experience.

I finally got my truck started and made a beeline for the nearest repair shop ... Jacks R Better.  Nice guy ... I think all he's done for me up to this point is smog my diesel truck, but I know they do lots of repairs there.  Thankfully I was able to figure out the brake light problem myself, probably saving a couple hundred dollars.

Since it goes for several months without use while I'm on the road, I asked for the best battery he had.  Don't sell me some cheap thing I'm going to have to replace in two years.  I got Interstate batteries.  Expensive?  Yup!!  $135 each.  I probably could have gotten them cheaper if I bought them myself, but then there's that installation thing that I'm sure I couldn't handle.

I wondered out loud why these had not lasted as long as the first set I had.  He said I had some very cheap batteries in it.  Really?  Why?  Because the last time I had them replaced, it was done at the GMC dealer in town.  They use cheap batteries so you will return sooner for another set.  I say SET because there are TWO batteries in this beast.  Do I believe it?  I suppose, since he showed me the batteries.

He also showed me how to disconnect just the black cable when I'm gone.  I'm not so sure about trying that.  Like I said, there are TWO ... and will I get them back on tight enough?  Will that mess with any of the electronics other than the clock??  I'd much rather put my store in you guys than the repair shop!! 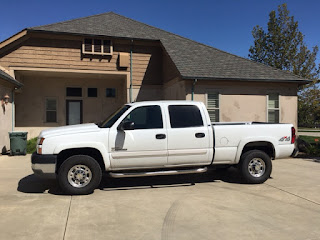 Unfortunately, I still have a problem.  It's getting hard to start.  It turns over longer then it used to before it finally starts.  Like maybe it's not getting fuel fast enough?  My friend Mark who knows all things diesel is on a fishing trip in Idaho where he is picking up HIS new truck to replace the one that was hit last month in Oregon.  That's the picture I showed you of the smashed trailer.  I'll check with him upon his return.

In other exciting news, I spent 45 minutes trying to figure out how to get my power washer to work before cleaning the front entry way.  The place looked like a spider's lair ... complete with black widow spiders.  It would have been perfect for Halloween with the webs hanging down two to three feet (for real), but the spiders had to go.

The mud wasps were on a roll too ... with most of that ending up in my hair!  YIKES!!  It's not the best job I've ever seen, but it's much better than it was.  Pressure washers scare me.  It's the picture in the instruction booklet with someone's head missing that does it.

I've got an early hair appointment .... won't she be surprised if there's still cobwebs in there ... so I've got to get my act together.  I'll explain my new job tomorrow!!