Names have been changed to protect the innocent.  In my humble opinion, there's nothing worse than having to go to the laundromat.  I would almost rather wear dirty clothes.  After two weeks in Florence Oregon, I'm running out of levis.  The top half is covered .... SO many shirts in my closet.  I actually HAVE a washer and dryer in my rig, but there's no sewer hookup here, so I'm stuck with trying to find a decent place to do laundry.  I'd rather use a rock in the river.

Why you ask?  Well back in the dark ages when a husband lived in the same house as I, we visited his family in Northern California.  Dad was a commercial fisherman.  Not wanting to put anyone out, we took our dirty clothes to a local laundromat.

Funny, when they came out clean and dry, they smelled kind of funny ... horrible in fact.  That's when I learned that all along the coast, the fishermen's wives cracked the whip and made the fishermen who came in after two weeks on the water, wash their OWN clothes at the local laundromat.  It doesn't matter how much detergent or bleach you use, all that fish oil and sand stay in the machines.  Once home, the wives then wash them again.   I vowed never to use a laundromat near the ocean!!

Yet here I am ... can you tell? ... sitting on the absolutely gross couch, afraid to touch anything.  If anyone in the building sneezes, I'll catch either a cold or the flu.  My body's resistance left along with my figure several years ago.  If you lost a sock, they are hanging on the wall.  Just take one. 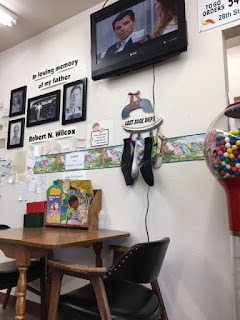 There is another brand new, fabulous laundromat in town, but you have to put a minimum amount on the credit card you buy, then insert that in the machine to get it going.  The last time I tried that, I left $5.00 on a card I thought I would never use again.  Washing was $5.50 a load.

When I drove up to THIS one, there were very few people inside as I wandered around with my basket trying to decide which machine to use.  Little ones were extremely dirty and $3.00 a load.  These shown below were $3.50 and the big machines $4.50.  I took the "just right" size.

As I turned around, I almost bowled over a nice lady with a big scowl on her face.  Yeah, I wasn't happy to be here either.  I threw the clothes in and slammed the door.  It bounced back and hit me in the knee.  You have to close the door and turn the handle she said.  Okay then!!

Now try to figure out what all those symbols mean on the top doors where you deposit your detergent.  The nice lady came over and pointed to the front of the machine while reading it to me.  I can run a D9 caterpillar, but washing machines stump me.  Of course the dispensers are disgusting with loads of leftover detergent and fabric softener.  I should have brought rubber gloves.

Fifteen minutes and fourteen quarters later (one at a time), it sprang to life.  I took a seat by the television and stared at the above wall.  Hanging there was the story of this laundromat.  WAY back in the day, the owner had a truck which he used to pick up and deliver laundry, washing things in his own machines.  Finally, he bought several more and opened a storefront.  His family now runs this establishment. 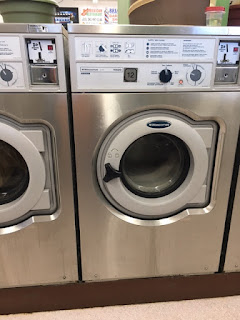 I kept an eye on the machines (I actually used two) and once the bell rang, I stuffed everything into my laundry bag ..... WET.  Even though I can't use my washing machine, I can still use my dryer.  I survived laundry day, and to my great relief, the now dry clothes don't smell bad at all.  YAY for clean clothes!!

Having not much in the house to eat ... I was getting tired of Subway sandwiches ... I whipped up some potato salad and meatloaf.  The salad was a big mistake.  For whatever reason, my stomach has decided it doesn't like mayonnaise.  I might get by with one meal, but two .... NEVER.  I can't seem to get that through my head.

At any rate, if you use the most fat free hamburger you can find and put it in muffin tins, it makes these cute little portion-controlled muffin-burgers.  There is usually so little fat, it doesn't boil over, but just in case, I placed it on a pizza pan.  They were mighty tasty, if I do say so myself.  A BIG jump over all-bread sandwiches from Subway. 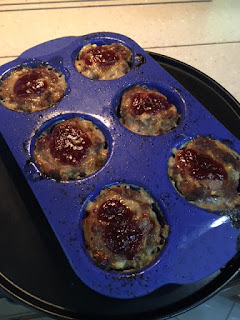 Although it's supposed to rain today, I'm going back out to the Jetty to test the winds.  This may be my last chance to get in some practice before heading back South.  I can't believe it's that time already.  How time flies!!!  Thankfully, I'll have a hookup and won't need to patronize the dreaded laundromat again!!