That's what my Fitbit said anyway.  Does anyone know how accurate these things are?  Certainly not on purpose ... had I known where I was going, I would NOT have done so.  Remember that sign I told you to ignore ... Spouting Horn .3 miles?  Although I had already gone up and down the Devil's Churn, how hard could it be?  I could do that in my sleep.

Maybe I should have paid attention to the warning this guy was giving me as I walked by.  He was scolding me big time. 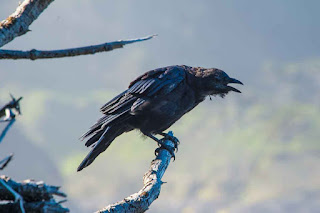 I kept going anyway, around the corner as the trail headed back towards the road.  It went all the way down to the beach, then back up the cliff in a series of very tall steps.  That got my heart going, but not as much as when it dumped me out on the road above. 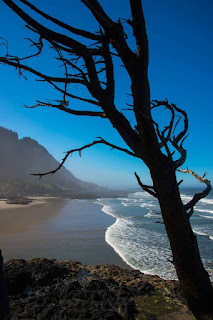 The "trail" continued along beside the road, as did I, hoping I would find another Spouting Horn sign.  Wasn't I surprised when I saw it and it said Spouting Horn .3 miles.  Wait ... it said that half a mile back.  I was too far into it to turn back. 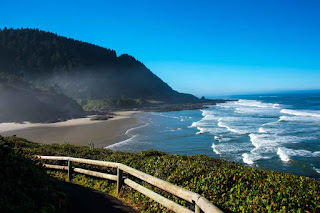 Pretty soon, it headed back down to the rocks below to the "tidal" area.  I clamored over a few of those rocks before continuing on the trail, which of course headed back UP towards the road.  At long last when I was on my last leg, I found the Spouting Horn viewing area, with no spout to be seen.  Someone asked about Thor's Well.  I've no clue, is that here?

Believe it or not, we looked it up on our phone maps, and it showed up below us and further towards the crashing waves.  There's no trail here ... you are just hiking over the lava rock towards this big hole.  There are no signs either .. just look for the people looking down.

As the waves receded, the water in the hole disappeared completely.  I didn't get close enough to photograph that.  I was afraid the water would come crashing out in my face!! 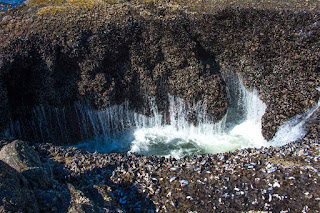 When the waves came back in, they filled the hole to overflowing, splashing everyone around.  Keep in mind, this at low tide.  Come here at high tide and you're going to get WET!! 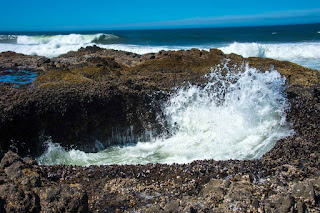 As I turned around and looked back, that finger tip of rock WAY over there is where I started out.  Wanting to get a picture of the Spouting Horn (the tide was now coming in), I decided to walk all the way back to where my car was parked and drive to the parking lot just above me.  Who knew you could drive right to it?? 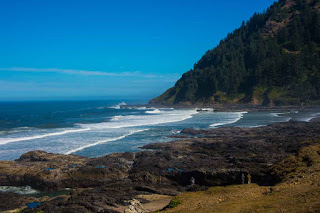 I climbed back up to this parking area with the only sign visible saying Cook's Chasm.  Now I knew where to pull over.  Along the way back, I spotted several more small parking areas. 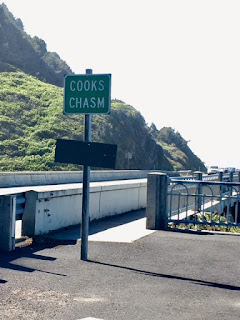 I stopped at every one for even more beautiful views as I tried to regain my breath.  There's no signage ... just a wide spot in the road to pull over.  Finally, I ended up at Cook's Chasm, parking on the far end, thinking that's where the trail down began.  I was wrong.  After walking the entire length of the parking lot, I found the trail at the North end, going down to water level for the fourth time. 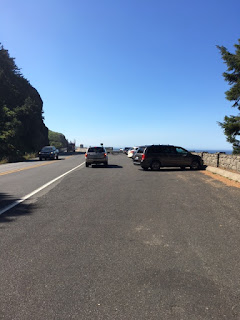 This long finger of water is Cook's Chasm, similar to Devil's Churn where water rushes to a tiny beach only 20 feet across. 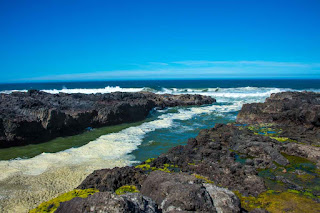 Look up and you will see this beautiful bridge I drove over on the way back home.  If adventuresome, you can crawl over the rocks to underneath the bridge. 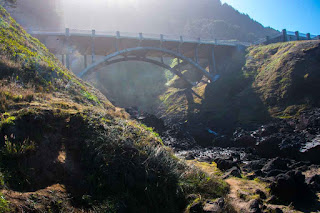 This is actually Spouting Horn at the right hand side of that big log.  Although there was a lot of water moving around, nothing was coming out of that hole.  All of that hiking, almost six miles for the day, was for naught. 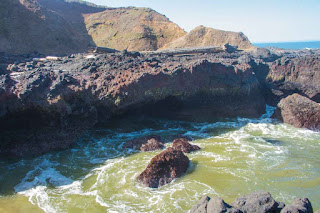 It was really scary to see and hear the water rush under these overhangs and come rushing back out with a loud BOOM that sounded like thunder. 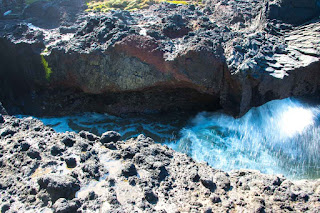 After the first boom came a quick second even louder BOOM when it hit the second overhang.  It was worth all that hiking to see this magnificent area of lava rock and water. 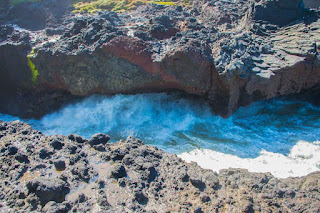 Totally exhausted, I made one more very slow hike back up the 45 steps, then the trail to the car.  Really, it's not that bad if you haven't already gone cross country.  By the time I got back to the overlook near Florence, I was pretty stove up.  It was then I discovered why everyone parks here.  It's not to take pictures.  AT&T cell service is 5-star at this point and everyone takes advantage of it, including me.  I also took a few pictures.  I love this view. 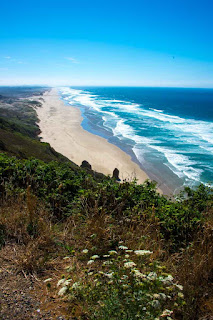 My GPS watch said close to six miles and my Fitbit said 43 stories.  Whatever it was, I was tired enough to crash for the rest of the day.  Surprisingly, I'm not sore.  THAT is amazing!!

I'm leaving very early this morning for Eugene and hope to get my repairs done in record time.  Little things like the hydraulic door hinge that's not working should be a quick fix.  I'm not so sure about the slide leak in the bedroom or the cracked bottom under the same slide.  Hopefully it won't take long so I can head out for those new tires.