I don't usually take my puppies with me when I explore the countryside wherever I happen to be.  There's nothing like having two dogs terrorizing a small dog or trying to fight a big one with a camera and backpack in your hand.  I feel bad about that because I know they would just love it.

At the Florence Oregon Elks RV Park there is a trail up on the hill that goes on for about half a mile.  Since there didn't seem to be lots of puppies around, I decided to give it a shot.  Best intentions, and all that!!

So here we are, being good puppies and walking straight up the trail.  We did pretty good until they found bear scat.  Boy did THAT make their noses work hard.  In no time we were going two different directions tracking the bear.  That's not MY idea of fun, just in case they actually FOUND it!! 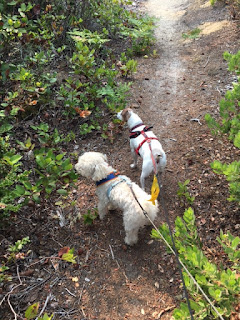 That's when some guy with a small dog came rushing up the path straight at us.  Jessie of course went into a barking fit like a good watch dog, but a bad hiking buddy.  I don't understand why people will run right up on you with their dog when they can definitely see I have TWO dogs who obviously don't want another dog around.  I asked him nicely to wait just a second until I picked her up since she was not dog friendly.  I've been there before, right? 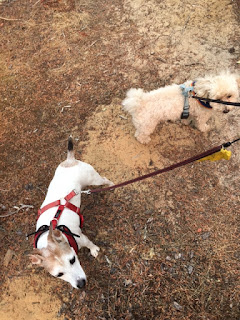 He waited all of two seconds before barreling past us while I clamored in the mesquite bushes, trying to keep my kids out of the way.  Is it just me?  It seems that happens every time I take the dogs out, which honestly, is the reason I DON'T take them out much at all.

Occasionally I'll take Cooper out for a quick walk ... he's more tolerant of other dogs ... but then I feel like a bad Mom for leaving Miss Jessie alone.  She's just so stubborn!!  I suppose that's the Jack Russell ... weirdest dog I've ever had.  Even after seven years, she's not one bit better in spite of everything I've done.  She's such a good watch dog, that I guarantee no one will ever get in my house.  Good for me, but not so quiet for the neighbors. 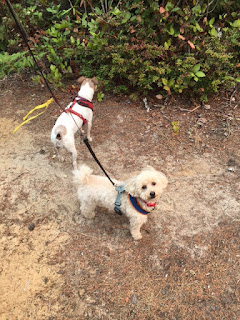 We finished off the hike, well over a mile, with no further incidents.  They had SO much fun smelling every bush and weed.  In the end, my puppies were too pooped to pop!! 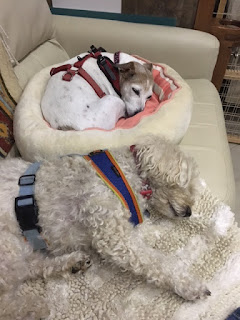 As soon as we got home, I let them out in the big back yard to wander around off leash after four months.  They went bananas!!  I call it race horsing.  They ran around in circles until they couldn't breathe, they were so happy to be home.  NO MORE HARNESS!!

The good news for today is my truck is up and running, sorta kinda.  More on that tomorrow, as well as my new job!!  In the meantime, I'm still working on the address change.

WARNING:  Please do NOT open those emails you are getting from Experian about your credit scores.  It's a SCAM!!  Do NOT check out your score that has dropped.  Again, it's a SCAM!!  The bad guys know that Experian was hacked and they are using that to get your personal information.  Do not fall for it!!!