The Ghosty Is GONE!!

I got lost yesterday morning.  When the alarm on my phone went off at 4:30 am I awoke with a start, dogs barking up a storm, jumped out of bed and ran smack into the wall.  I wandered through the house looking for the door to let the puppies out.  I ended up in the laundry room.  It's certainly different having a large house to live in versus my motorhome.  I don't have to exercise any more because it's a quarter mile walk to the front door!! 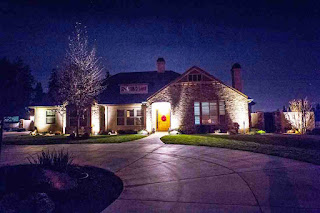 My shower is HUGE compared to the rig.  After the first ten seconds I reached up to turn the water off.  Hey ... I don't have to do that here.  How cool is that?  However it did make me feel really wasteful.

Unfortunately it has a big overhead light, meaning you can now see all those long hairs you missed when shaving your legs in the dark hole of a shower in the motorhome.  Yikes!!  I sure hope everyone ELSE didn't see that!!

The other nice convenience in my bathroom is a large magnifying mirror so I don't look like I applied makeup with a stick.  Good heavens!!  Where did all those wrinkles come from?   Home apparently DOES have it's downsides.

After 2-1/2 hours of vacuuming, I dumped out an entire bucket of dirt.  I don't understand how I can have a fairly new house that allows this much dirt inside.

That's when I heard the chirp and Jessie crawled up my leg.  She doesn't mind a lot of things, but chirping smoke detectors are at the top of her I'm-Going-To-Die list.  I quickly discovered there's no use buying extra batteries, because when you go to use them, they never work.  Dead just like my truck.  Luckily I robbed one from the motorhome that killed the awful noise.

So YESTERDAY, I left at 0-Dark-Thirty for the lovely drive to Hanford.  All went exceedingly well considering I hate driving my Jeep on the freeway.  It's so light, it practically jumps off the road every time you hit a bump ... which is constantly in California.  When I got to Fresno, traffic came to a screeching halt ... parking lot style.  It took me an hour to go from one side of town to the other.

I arrived in Hanford just in time for the meeting to begin.  Mostly this is just to go over everyone's wish list for the Indio Rally.  I wished NOT to get a radio, but was voted down.  The best part was catching up with several Golden Spike Members who came to have their vote counted.  I love those people!!

That's when the attack began.  Their Secretary is leaving and they REALLY wanted me to take the position.  I'd love to ... it's not even that much work.  Trouble is, it would mean I had to give up my Golden Spike office .. a group I feel a great affinity for since they have all made me feel a part of their family.  Not to mention all the extra work at the Indio Rally, being Secretary, Ice Cream Captain AND helping put on a Golden Spike Rally-Within-A-Rally.  I think I better pass for now.

Here's the early scoop on the ice cream.  Our Friday ice cream giveaway will be held as usual.  Saturday instead of an ice cream bar, everyone will get scoops covered in the sauce of their choice, chocolate, strawberry or caramel, along with a piece of cake to celebrate 30 years at the Indio Rally.  Pretty cool!!  And did I mention it's all FREE?  This one will be held inside, just in case it rains.

The drive home was unremarkable.  YAY!!  That's when I decided to go mess with my truck again.  I pulled the brake up, pushed it down .... did everything I could think of.  NOTHING.  That brought me in close contact with the horse trailer electric brake controller.  I'd hit it several times before to no avail, but this time I hit the switch hard, moved the box up and down and checked the wiring on the back.

IT'S A MIRACLE!!!  The brake lights went out!!  I was more excited about that than having two days of ice cream work at Indio instead of three!!

Now I better let the engine run awhile to charge up those batteries.  Click ... Click!!  RATS!  My excitement was short lived.  I hooked up the battery charger again and hope to get it to start today and run just long enough to get me to the repair shop for new batteries.  The ghosty is gone ... at least for the moment!!