My Record Is Intact!

Everyone around here knows about the Farmers Market on Saturday.  It seems this year they extended it to Saturday AND Sunday.  If you happen by mid week however, you will STILL be able to buy the best fruits and vegetables in Oregon.

Open every day, you can taste test everything in the big tent on the boat dock in Florence.  I'm sorry to say I don't have the name of the farm.  You would think being from California, that we would have products just as good.  We do ... the problem is it's all sold to out of State markets.  Unless you know the farmer yourself, you're not getting first quality.  California gets the leftovers and what they import from Mexico.  If you go anywhere and see a sign that says "Fresh from California" ... you're getting the best.

It's a sad state of affairs that we don't have nectarines and white peaches the likes of which you can purchase from this tiny market in Florence.  I've already consumed everything you see here, except for the garlic oil, and I'm heading back for more!! 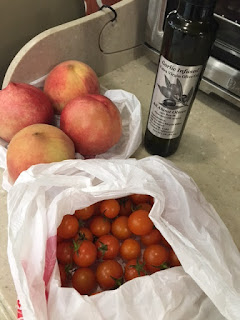 Too bad I can't use those products to help George.  Remember the panini sandwich that was so good? The next step was to try out the chicken.  I have to admit this is partly my fault, because silly me, I bought a package of "natural" chicken BREASTS (my first mistake).  Naturally fed outside and all that rubbish. 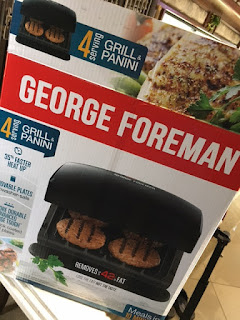 They were so thick, I sliced them longways, then marinated them in teriyaki and pineapple juice, just like the Hawaiian BBQ.  That was my second mistake!!  The meat sucked up the acidy tasting pineapple juice and NOT the teriyaki flavor.  My THIRD mistake was cooking them on the George Foreman Grill.

First off, see that plate thing at the bottom front?  That's to catch the juices that flow from the machine.  I was a little late in getting it placed correctly, so my counter was instantly covered in boiling hot marinade.  It's too bad all those juices don't stay in the meat ... it might have been much better!!

Let me tell you what happens when you put semi cold meat on a screaming hot grill.  It seizes up hard as a rock.  I knew this, but the advertisement said everything comes out juicy and tender.  They lie!! 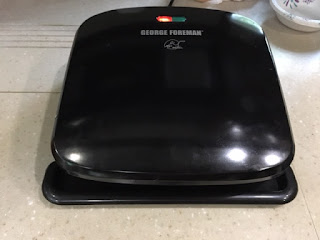 In four minutes when I smelled something burning, I opened the lid just to check.  The red juices were still flowing, meaning it wasn't done.  I turned them slightly to get those fabulous grill marks.  In another four minutes they were REALLY smelling burnt, so I took them out.  Yup .... burned to a lovely shade of black.  Funny .... the bottom looked fine, it was just the top that burned.

Now for the taste test, which I knew wasn't going to end well.  Honestly, I could barely cut it with my sharpest paring knife.  Just as I suspected, it tasted petty burnt and was tough as my dad's old leather chaps.  I ate white peaches for dinner. 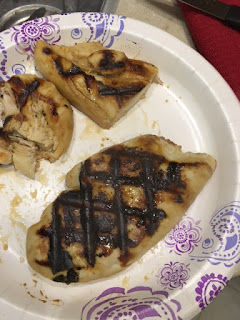 Not to be wasteful, I let it cool, sharpened my knife and sliced off the burned part, then cut it into thin pieces for a stir fry.  George bombed when it came to chicken.  Maybe it was me, or maybe it was the chicken but you can bet I won't be cooking that again.  Maybe I'll try hamburgers next time.  My bad cooking record seems to be intact!!

While it looked like it was foggy for the last two days ... all day long ... it was smoke from the Oregon fires.  So much smoke it burned my eyes.  With absolutely no wind whatsoever, it hung in the air for all to breathe.  Last night a breeze finally came up, clearing out most of the thick air.  It's supposed to be back in the 60's this week.  That bodes well for air quality and kite flying!!