I Can SEE ... The Oregon Sand Dunes

It's weird to think there are sand dunes in Oregon.  I've no idea where all the sand came from, but it's here in epic proportions.  On holiday weekends, this place is crowded with dune buggies, four wheelers and motorcycles.  This is actually a Recreation Area, meaning you have to pay a $5 fee to get in.  Although there are a couple of places these speed demons can park and ride, there is only one spot where you can watch them. 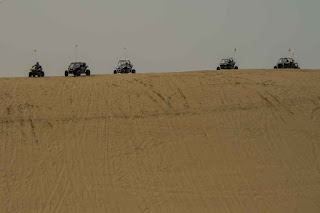 The fun begins at the parking lot, goes up a very steep hill and continues on to who knows where, since there's no way you can see.  On this day, most of the riders were simply riding to the top of the hill, turning around and coming back down.  See the orange flags?  It's mandatory on every vehicle so you can see if you are going to crash into someone when you crest the ridge. 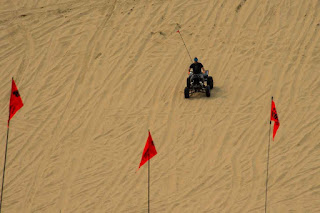 You have to like noise for this sport.  These guys rev up their engines and ascend the steep hill whining and screaming like a drag race.  Many never make it to the top ... like this guy who had to turn around halfway. 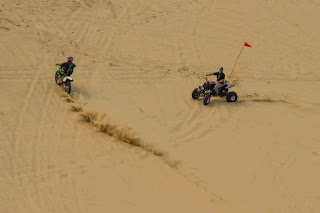 There's a work camper here in an awesome site with full hookups, all free if you volunteer to keep an eye on this madness and chase everyone out at 10:00 pm.  He was a very nice guy from Northern Texas (no flooding for him) who had a Jeep he patrolled with.  Really, he just sits back and lets them wreak havoc unless there's an accident, whereupon he calls the Park Rangers.  It's awesome entertainment. 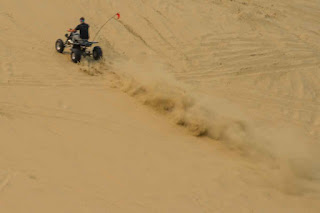 Just as I was leaving, this guy came over the ridge in a big display of testosterone, driving WAY too fast and making S turns down the hill, reving his engine all the way and throwing sand everywhere.  Yeah, you impressed us, now get out of the way!! 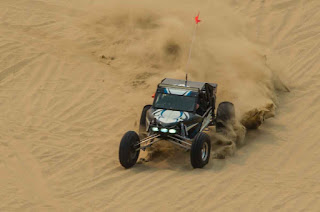 There's every kind of rider imaginable, from Grandpa and Grandma to a five year old who followed dad up the hill.  There actually is a speed limit of 25 mph, but no one to enforce it.

For those who were wondering, my left eye has been giving me fits of twitches, the feeling of my pulse and a nice ache that worried me.  I don't want to say we're in the back country, but it was difficult to find an ophthalmologist to check it out.  Dr. Karren comes from somewhere one day a week, so I met up with him yesterday.

He did all kinds of tests, burned my eyes with drops and colored them yellow.  The standard stuff.  According to him, good news, there's absolutely nothing wrong.  All my numbers were perfect.  Hmmmm then why is it twitching and achey?

When all this started getting worse, I laid off my phone thinking I was straining my eyes and I quit taking the Lipitor, just because.  I'm not saying that's what was causing the eye muscle problem, but I'm happy to report my eye is better than it has been in two months.  We shall see if it continues to improve.  Maybe it's just because I'm a nervous Nelly.

With that worry out of the way, I'm heading off to Heceta Lighthouse, in spite of the smoky skies.  Although it has cooled off considerably, the sun hasn't been seen all week due to smoke from the fires inland, several of which have been caused by kids setting off firecrackers.  That's right .... idiots!!  I'm sorry to say Multnomah Falls, one of Oregon's premier destinations, has been completely burned.  I'm praying for rain, which is supposed to happen Thursday.