Nick Tried To Kill Me!!!

It may not be a good idea to listen to your friends when they tell you where to go fly a kite.  Maybe Nick's version of "go fly a kite" meant something different than what was on MY mind.

Turn left out of Thousand Trails and go to the end of the road.  Walk over the dunes and take a high wind kite, he said, probably laughing under his breath!!  I did as I was told except for one little minor part.  There are several parking lots along the road with trails over the dunes.  I stopped at the one that looked the least scary due to cars with people living in them, and the one with the least amount of broken glass.

I'm not sure why, but these parking lots are right in front of the tallest dunes, meaning you have to walk UP a ridiculously steep embankment in 12 inches of soft sand.  You can do this Nancy .... I stopped to rest four times up the first hill.

FINALLY ... I made it to the top to see it was even STEEPER down the other side, and MUCH longer.  Good grief!!!  I looked for the easiest way down the 100 foot 45 degree slope, but there was none.  Just to show you how much of a die hard kite flyer I am, I went down the hill KNOWING I was going to die on the return trip. 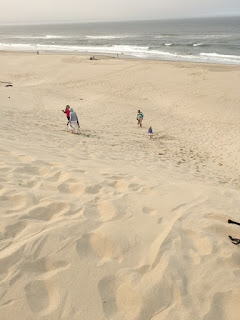 The beach was beautiful with a nice breeze blowing.  Time to try my new Skybond lines and give them the workout they didn't get in Newport. 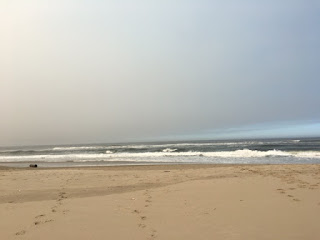 It went perfectly as I laid them out and set up the kite.  I brought my Shook high wind beauty.  Unfortunately, I also brought my big camera in the backpack ... part of the reason I had so much trouble getting up the hill.  Thing is, you NEVER leave ANYTHING in your vehicle.  I had taken some photos in the morning and didn't want to risk getting it stolen.  I won't do THAT again!! 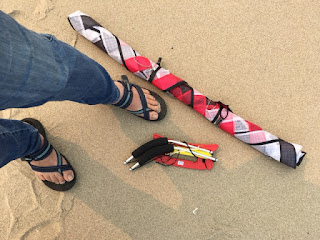 The Shook rose like a dream, and with a few wind adjustments, flew like I knew what I was doing.  Although the trick I've been working on just isn't coming about, I kept trying until a group of people and their kids plopped down right in my wind window.  People have no idea about kites ... I get that ... so I tried to move forward, taking a couple steps, reaching back for my backpack and throwing it ahead of me. 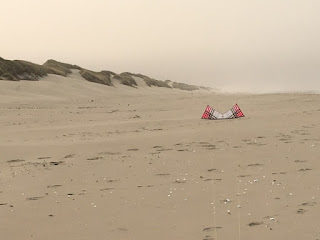 For those that are not kite flyers, please stay as far away from the kite as I am, in all directions.  A kite that falls from the sky can do some pretty bad damage to your skull when it crashes into your head. 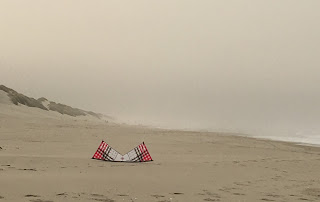 I kept eyeing the return trip thinking it really didn't look THAT bad.  Finally the wind died down and the Shook would no longer fly.  RATS!!  I put her away and began the long excruciating hike back.  This picture is so deceiving ... I tried to go around by the orange tents on the right, but they were smoking "something" in their little glass pipes, so I stayed to the left.

For every 12 inch step I took, I slid back 10 inches.  Being an old horse woman, I know if you traverse the hill at an angle, it's much easier.  This was so steep, it was hard to keep my balance as my feet slipped out from under me.  Right about then I was saying some pretty bad words about my "good friend" Nick!!  Surely they didn't go THIS way!!

I must have stopped fifteen times to catch my breath.  My little Fitbit watch was having a heart attack right along with me and my three previously broken toes were screaming bloody murder!

At long last, with my last ounce of strength, I made it to the top.  Instantly I knew I was going to be stove up like a foundered horse on green clover.  I've already hit the advil bottle as I moan and groan around the rig. 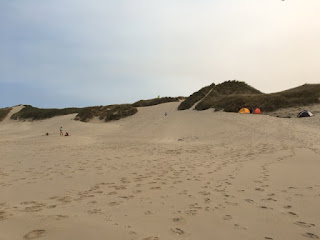 On the way back home, I figured I had used up at least a million calories, so I stopped in at BJ's ice cream for a double scoop. 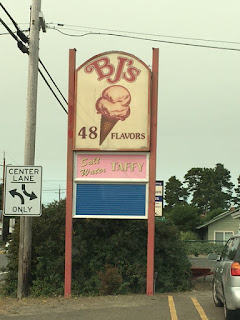 The scoops here are much smaller than in Scoopers.  I sat on the swing rocking back and forth to keep my legs moving and finished every last drop.  Once back at the RV park, I walked around the loop every hour just to be sure I didn't freeze in position on the couch. 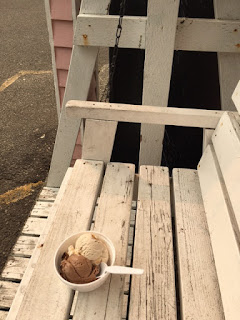 Much as I'd like to go back out today ... hair of the dog and all that ... the crowds are terrible being it's a holiday weekend.  We'll see how I feel this afternoon.

Maybe I'll try the END of the road early this morning.  I'm pretty sure NOTHING can be as bad as the hill I climbed yesterday!!