Walk In Lewis And Clark's Footsteps

Fort Canby is located on Cape Disappointment, so named because in 1788 a British fur trader John Meares just missed the discovery of the Columbia River when he turned around in a big storm.  How disappointing!  Cape Disappointment has an average of 106 foggy days a year, so you might want to take a coat.

It is at this location however, that you can walk in the footsteps of Lewis and Clark who were sent by President Jefferson to discover the Pacific Ocean.  Although the coastline has changed, several of the landmarks described in their journals are still visible today.

You DO have to pay for parking, $10 for a day pass which allows you to park at several of the local attractions (less if you only stay an hour).  Please don't think you can slip this one past the Park Service ... I saw THREE cars get a nice ticket with a fine of $99 each.  It's not worth it!!

Later on as shipping and protection of the United States became more important, Fort Canby was built here on the southern most tip of Washington State on the North side of the Columbia River.

Like in the old days when families came to picnic next to the massive guns, even bringing their dogs with them, today you can do the same.  Established in 1864 during the Civil War, it was named after General Edward Canby who was killed during the Modoc Indian War. 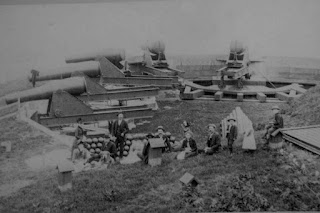 In the early 1900's, after a long period of neglect, it was renovated and two batteries were built, Battery Harvey Allen and Battery O'Flyng.  In 1921, a third was built, Battery Guenther. 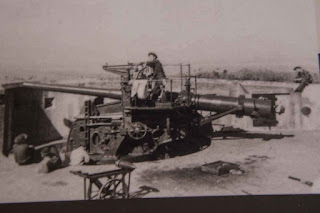 In 1941, it was re-activated during World War II.  What exists now is from that time period.  It's fascinating to walk through. 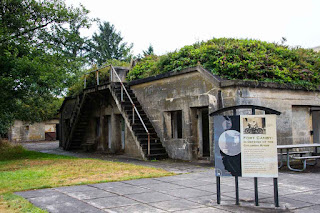 The batteries look quite different from the first pictures.  You can go through the barracks where a fireplace is visible and imagine just how freezing cold it must have been in the winter. 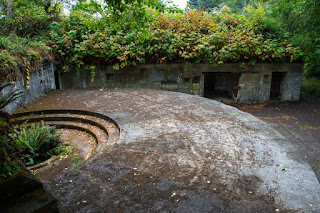 All the big artillery guns have been removed, but you can see where they used to be.  The entire mountainside is now covered with trees and bushes with the view blocked by the Lewis and Clark Interpretive Center. 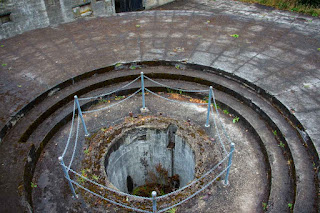 Even on a sunny day, it was damp and cold inside, with the walls covered in green algae.  It's pretty spooky to wander the dark hallways. 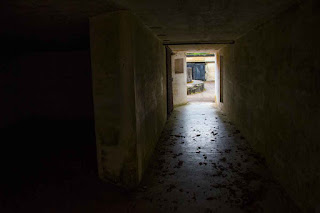 One of the rooms where powder canisters were stored is still intact, along with the cart that delivered ammo and powder to the guns.  If you look back at the second picture above, you will see the same cart.  I'm guessing here ... there weren't any signs explaining this, only what remained of a sign someone apparently tore down. 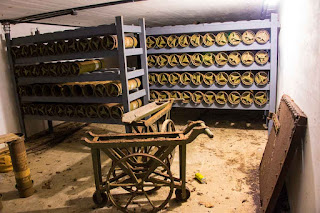 This is what they were trying to protect during the Civil War, World War I and II.  The Jetty wasn't there in the old days, but this is the mouth of the Columbia River with a ship coming in.  The jetties help keep erosion from tides and waves to a minimum until ships reach deeper water. 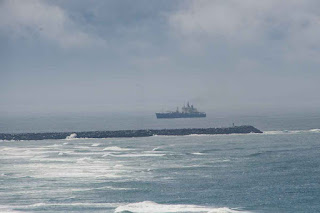 This might have been the exact spot Lewis and Clark stood before making their way down to the beach.  Actually, they say Fort Canby WAS the spot, but who knows for sure.  At any rate, the view from up here is spectacular!! 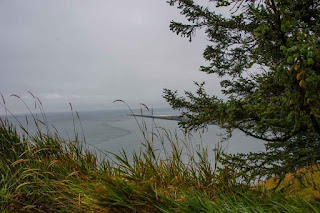 Just to the left of Fort Canby is Disappointment Lighthouse, the oldest operating lighthouse on the coast, which is now run by the Coast Guard.  You can hike a trail (it's quite a ways) and get up close and personal, but you cannot enter the building.  Save yourself the trouble and get pictures from here. 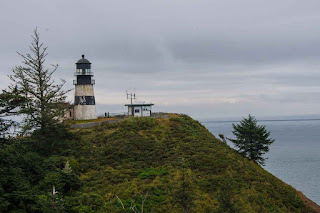 This is also the location of the Lewis & Clark Interpretive Center, placed right in front of and basically on top of, the Fort Canby batteries.  It costs an additional $5 to walk through.  This is NOT a museum, it's an Interpretive Center.  I suppose you interpret the history yourself as you walk down hallways reading and reading and reading some more. 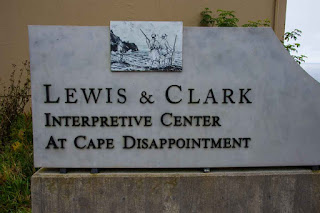 There are bits of photographed journal pages accompanied by drawings, but honestly after the first ten minutes, I was wanting more.  Everything you see is a re-creation of what things might have looked like ... a 1/2 size canoe made from a tree, and lots of interactive things.

I suppose I'm jaded, since I've been to some other actual museums that are more interesting to me in their nature when it comes to this feat of strength and determination. If you have NOT seen anything about this story, you should stop in and read about how these men made it to the Pacific Ocean and back to Camp Du Bois in Illinois.

TRY THIS can be seen every few feet.  Look through this really terrible telescope, pull out this drawer to see botanical re-creations and here's a couple of unreadable journals on plastic.  I apologize, truly, but although the story is well told on the wall, it's like a cookbook with no pictures.  They did have a couple of nice baskets.  This center might be more for showing children the story. 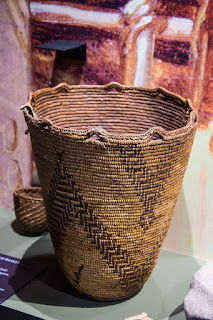 What they DO have are Patrick Gass' journals, donated by his family.  Patrick joined the expedition in 1804 after the death of Mr. Floyd from appendicitis.  He was a carpenter who built canoes and wagons for the crew and was the first to publish his journals in 1807.  At the age of 91, Mr. Gass had to be removed from the Civil War recruiting station where he was trying to join and fight the rebels.  He was a pretty tough cookie!! 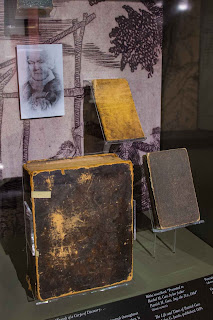 Here's an example of the story about gathering botanical evidence, how they pressed samples between sheets of paper and stored them in boxes for the return trip. 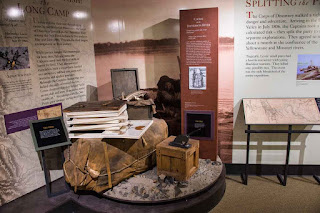 The center does have a great Gift Shop with a good selection of books.  If you like to read, this is the place for you!

If you purchased a one day Discovery parking pass, you can now visit (and park) at a couple more stops on the Cape.  I've saved those stories for tomorrow.  It's raining again and I doubt I'll be out and about!!