When I was in school, I always got good grades in math and typing.  Back then, you had a choice of Home Economics, which might have increased my cooking skills to an acceptable level, or secretarial classes ... typing and shorthand.  I failed miserably at History and Geology.  Who would have thought I would end up being so fascinated with the history of little towns.

I didn't surprise myself at all yesterday ... I picked up two more geocaches at the local cemeteries. One of the perks of geocaching is the stories you read about what happened in the distant past.  Around Long Beach, it's the many ships that went aground and sank below the waves, sending many seamen to the promised land.  In the Oysterville cemetery, you will find two of those seamen who were finally discovered.  They remain a mystery however, as no one could identify them. It is said when Lewis and Clark visited here, Clark and Major Espy were guided to Oysterville by Chief Klickeas because of the oysters, which they harvested and shipped to California gold miners.  Local lore however, seems to stick to the Chief Nahcotti version.  That it was HE who met with Clark.  Notice the difference in spelling?  There WAS a Chief Nahcotti, but in fact, no one really thinks he is buried here. Interesting, right?  I just love a good mystery! 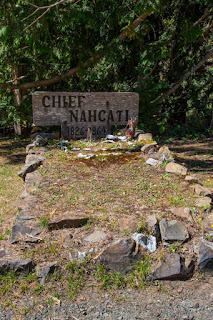 Many of the Espy family are buried here in this corner with the beautiful fence.  Willard Espy was a writer and Manager of Public Relations for the Readers Digest magazine.  Although he spent most of his time in New York, he was raised in Oysterville and wrote several books in his grandfather's home. 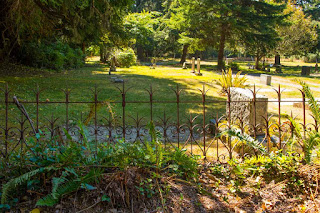 Here lies the Mad Russian of Oysterville, Stormin' Norman.  As you drive through Long Beach, you will see the huge store of the same name.  It's interesting that I cannot find ANY information on Norman Dutchuk other than his birth and death dates.  He must have been a character! 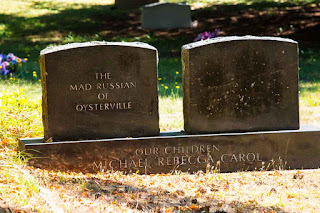 Ned Osborn's story is a sad one.  No one knows when he was born, but he arrived in Oysterville aboard the schooner Sailor Boy and here built a house for his fiance.  She jilted him, which is a shame.  It's a really cute yellow house hidden in the trees.  When she married another, he quit building the second floor and lived on the main floor, a confirmed bachelor until his death in 1906.

Seems I'm always a day or two late.  I would just LOVE to get my hands on one of these houses and fix it up.  Although the little signs try to convince you the descendants of the original settlers still live here, you might be misled according to locals. 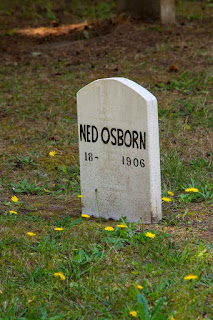 Sometimes geocaching will take me into the wild blue yonder ... or at least ten miles up a one lane gravel road ... where I discover lots of amazing things, like this beautiful slough area.  I also discovered a huge tract that had been clear cut for lumber, but now holds a secret.  A stinky one at that!  Cut down before the idea of reseeding, it has become an experimental plot for fertilizer products.  "Poop! There it is"  was the name of the geocache.  Need I say more?  I laughed when the cache container was ... you guessed it ... fake poop!  I looked three times before I touched it! 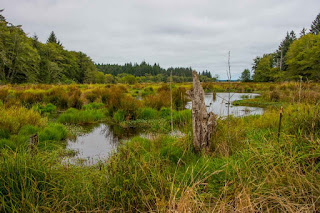 Next up on the geocache list was Lone Fir Cemetery.  The lone fir has been taken down since it became a hazard to visitors.  In 1839 there were 151 people living on the peninsula.  That number increased when Claim Laws were passed in 1850 giving a married couple 640 acres of land just for moving here. 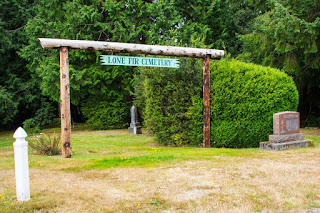 In 1854, the first meeting of the Washington Territorial Legislature was held.  The first nominee died of pneumonia, so Jehu Scudder took the job.  He died before he reached the meeting and was the first to be buried on this land he donated for a cemetery.  The next nominee died one day AFTER the meeting.  I think I would have passed on that position. 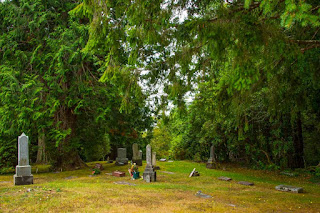 There are many headstones handmade of concrete and a few of wood still left in the cemetery.  It seems something bad happened around the early 1900's, as many children and parents died about the same time. 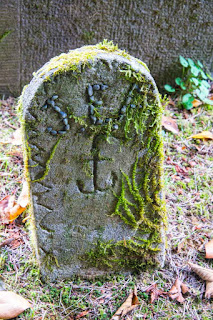 I'll probably be staying inside today as a big storm has hit the coast.  Most of yesterday the winds kept it off shore, but at 3:00 am it hit here with gusto!!  Of course that means I've been up since 3:00. Maybe a little indoor antique shopping is in order!