It was yesterday ... I'm a little behind.  All that heat fried my little brain.  After Miss Patty Chance gave me the heads up, I tried to look it up on the internet, but for the first time, I found nothing.  As soon as I turned on my Geocaching App however, it gave me a resounding welcome!!

Thank goodness the cool weather came back in.  I was greeted with a refreshing 50 degrees when I opened the door, followed by a nice breeze.  That meant HUGE crowds at the Kite Festival.  I waved to everyone as I drove by on my way up the Peninsula.

Thanks to a steadfast agreement, developers have not been allowed into the interior of this arm extending up the Washington coast.  I wouldn't have known it unless I went geocaching!  There are several good sized lakes here, this being Loomis Lake.  This was my first stop, where I found a huge lake, full of fish for dinner if you're a fisherman, where you can kayak for hours in absolute peace.  This one is for Nick and Terry Russell, who have inflatable kayaks and need a place to paddle.

I even got a big geocaching stamp for finding that one.  There was another at the entrance gate, but crawling through the jungle on hands and knees getting my hair caught in a berry bush, didn't do it for me.  I backed out, leaving a chunk of evidence I had been there.  I'll leave that one to the kids. 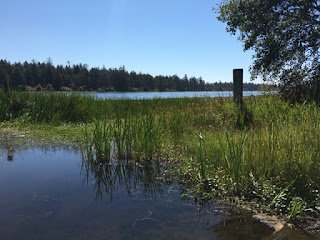 Can you guess where I am now?  Jacks Country Store in Ocean Park.  I LOVE this store.  Talk about one stop shopping ... they have it all and it's better quality than Walmart! 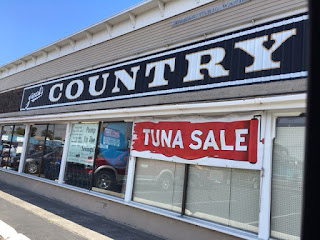 Here's a sample of the kitchen gadget aisle.  It's like an old hardware store, blended with the Kitchen Store, Safeway and a fish market, all in one. 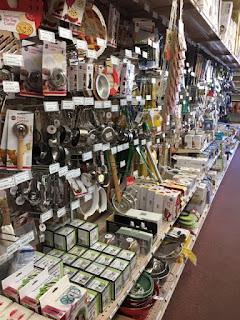 Just a sample of what I found ... including sleeves that fit on iron skillet handles so you don't burn yourself, which is a good possibility for me!!  They also have cool things like bacon gum!! 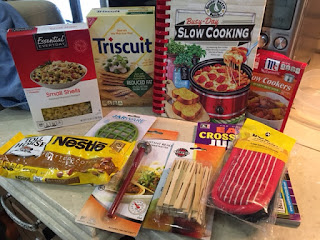 Just down the street is this unassuming building known as the Full Circle Cafe.  When you enter, go straight to the back to find a huge yarn store.  If you eat here (the food is good), be patient.  There's only two people doing everything!! 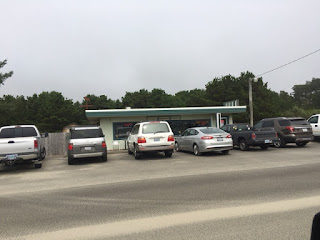 The yarn store is full to the brim with a surprising variety of patterns and colors.  I wasn't looking for anything special, just cruising through the aisles. 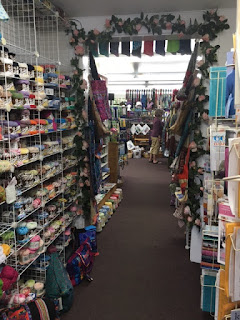 But of course I DID find something to work on when I'm not on the beach practicing with my kite.  It was THEN that I found these spectacular Victorian scissors.  I've been on the hunt for ages ... and where do I find them?  In a tiny store way up in Washington.  It's a beautiful necklace you wear when sewing, quilting or doing needlework until you're ready to cut ... just pull on the handles and you have a sharp pair of scissors at your fingertips. 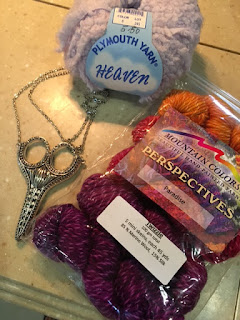 I picked up three more geocaches, one because Barbara and Tom Westerfield are such good teachers.  It hadn't been found, or at best was difficult to locate, as noted from previous visits.  As soon as I drove up, I saw it.  It looked like an electrical outlet cover on the side of a light standard, but lift it OFF the metal pole and it hides a geocache.  FOUND IT!!

With four in my pocket for the day, I thought about stopping here at Curbside BBQ for dinner ... only for a fleeting moment. 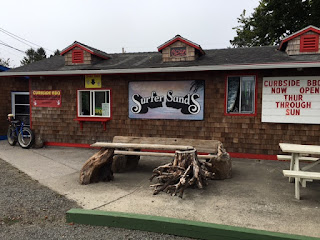 I actually stopped there last week.  Depending on what you order, this is probably one you can skip.  I expected the pulled chicken to be more than just pieces of drumsticks.  Although the sauce was tasty, there was lots of gristle, which I detest.  Hopefully the brisket or pork is better.  The sides were good, just nothing to write home to mom about. 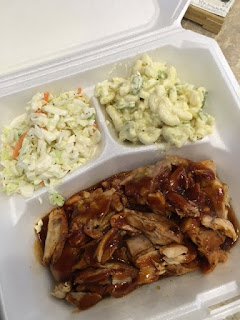 When I came back through town, I was happy to see the cool weather holding and a million people at the Kite Festival.  The wind was blowing nicely so I'm sure the rest of the activities went off without a hitch.  There wasn't a single parking space anywhere and it took me 30 minutes to go five blocks before taking a side street.  I've noticed that in every town, there are one or two side streets that will take you the entire distance, bypassing the mess in the middle.

Today I move to my next location, thanks to Thousand Trails who won't let me stay one day past my three week limit, no matter the reason.  The good news is I'll be even closer to the beach for kite flying and further North so I can explore that area more.