Lessons Learned ... Until I Forget!!

It was just a matter of convenience when I picked this bowl to mix up a batch of cookies.  Yesterday was Sunday and I chose to hang out with the puppies, watch football and bake.

The lesson had already been learned but forgotten.  This bowl is not very deep and it has slanted sides, not the straight up and down sides that are required for this project.  You wouldn't think that mattered much, but it did.  As soon as I began to cream the butter and sugar, it splattered out the sides of the bowl all over the counter, the floor and me!! 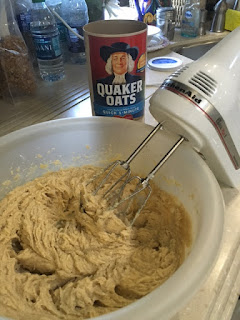 That was bad enough ... I still had flour and oats to go.  What a mess!!  It took me longer to clean everything up than it did to bake the cookies!  I put butterscotch chips in this batch.  It's funny because they almost taste like they have alcohol in them!  That's a good thing, right?? 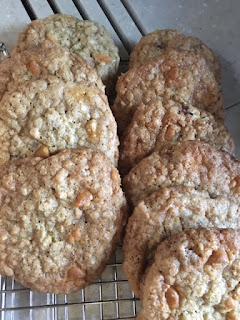 You would think I had learned my lesson when it comes to knitting, but I'm still trying.  At the Purly Shell Fiber Arts store in Illwaco, I was greeted by Maximilian.  That's not his real name.  I couldn't get over his haircut, so when she said his name four times, it went in one ear and out the other.  It's really something like a Roman Soldier.  Anyway, he's a sweetie pie!  Don't try to pet the other one, he bites.  Lesson learned on that one! 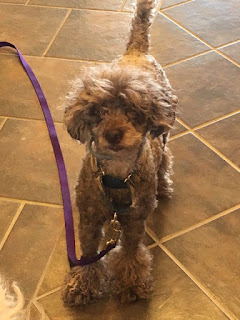 I bought this beautiful skein of hand spun yarn to make "something", I'm just not sure what yet.  Although I try not to buy yarn or material unless I have a pattern in hand, I haven't quite learned that lesson.  Well actually I have, I just choose to ignore it!! 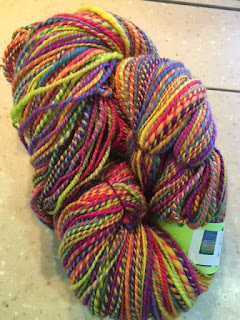 The good news is I finished the cowl with NO mistakes!  How amazing is THAT!!  Yes, it was pretty easy, but that's the lesson I learned about knitting.  Start with easy things and use lots of stitch markers. 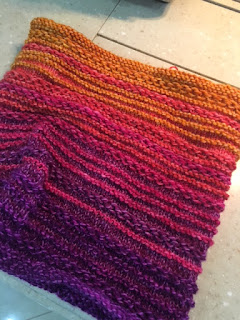 In the store, unlike most yarn stores, they have many samples of shawls and gloves, things you might actually use.  All the patterns are downloaded from Ravelry.com for free ... and so I did.  I downloaded a pattern and had it in hand when I got to the store to buy yarn.  Here's the new project ... a shawl/wrap.  Wish me luck ... no mistakes SO FAR! 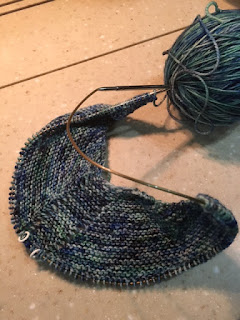 You would think I learned the lesson about Jonathan's cage some 40 years ago.  No matter how neat and tidy I am about keeping it clean and the newspaper flat so he can't grab it with his beak, he always gets a piece of it and rips it to shreds.  It's his favorite pastime ... that and chewing on sticks.  This is about five minutes of his work.

I wish the cage builders would add one inch to the height to keep the bottom tray away from the grate.  Apparently they don't OWN any birds, they just build cages.  It takes twenty minutes to clean up the mess, which includes dragging out the vacuum to clean the mess I've made on the floor trying to get it all in the garbage can.  The lesson is "don't get involved with a parrot".  They are a life long commitment!!! 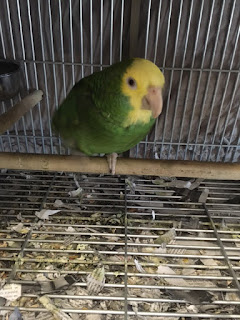 Here's a good lesson for all you RV'ers out there.  Use of Duck Tape #2003.  When you wreck the front of your fifth wheel, or maybe the back of your Class A, just grab several rolls of duck tape.  It made the entire front aerodynamic and waterproof??  No, you can't open that window, but who needs fresh air. 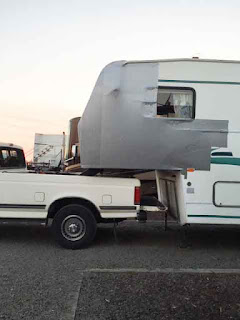 These guys were an easy lesson learned.  They are my best buds and great company.  Even though I can't go to Hawaii any more due to lack of dog sitters, I wouldn't trade them for the world.  I'm a little late, but Happy National Dog Day!!  Gosh, there's a day for EVERYTHING! 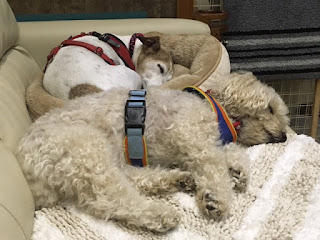 There's a couple more things ... when you write notes, don't just put something down like "no neat paper" because the next day you won't have any idea what in the world that meant.  Always try to leave the RV park by the appointed time, not two hours later like my neighbor, and if you clean your sewer hose by sticking your water hose inside, you are bound to learn a really BIG lesson, as will Duck Tape guy.

It's been overcast and rainy the last couple days, with no wind to speak of.  The lesson here is never plan on anything that requires wind, because most of the time (this year anyway) you'd be out of luck.