Here's an interesting story I've wanted to tell you for awhile, but didn't have the pictures.  It's about a Hungarian born artist wood carver Peter Wolf Toth who has created a Trail of Whispering Giants across the U.S. and Hawaii, including a couple in Canada and one in Hungary.  There's no geocache here, just a great story.  By the way, if you DO geocache, you will find some cool information about the areas history.

Ranging from 15 to 40 feet, these represent the Native Americans in the area they are located.  I bet you've seen one or two and didn't know what they were.  This one is located close to the round-de-round as you come into Astoria on Taylor Street.  There also happens to be a free sewer dump there for RV's should you need one.

Check out David Schumaker's website.  He came to visit me in Seaside ... you meet the nicest people in RV-Land ... and showed me his book with pictures of all 57 statues he has visited (maybe even more by now).  David made it his quest to visit all of the 74 hand carved giants. Some have disappeared and some are in various stages of disrepair but this one is spectacular. 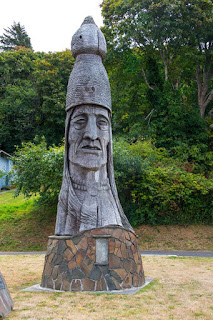 This happens to be Toth's 57th statue dedicated to the Chinook and Northwest Coastal Indians.  Maybe there is one where you are now?  If you look up Trail of the Whispering Giants on Wikipedia you will find the complete list and indications whether it still exists or not.  You might just start your own list! 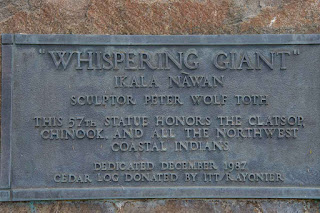 After checking out the statue, I figured to try some more geocaches and gain redemption.  Here's some of Long Beach's early residents whom I'm sure never heard of geocaching.  Notice the guy in the background was too cool to raise his pants legs. 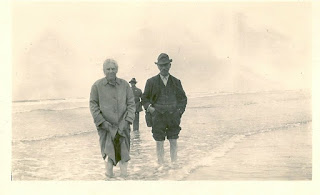 Although there was a cache near this old Department Store in Ilwaco, it was again too crowded to test the waters.  After the store want out of business, it became a restaurant for awhile. 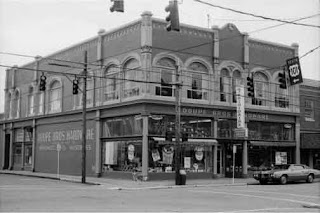 Today it looks much the same, but apparently needs a new roof before the business opens again as another restaurant.  Unfortunately, there's not much tourism here to sustain something this big.  The town booms when the salmon run, then becomes a ghost town. 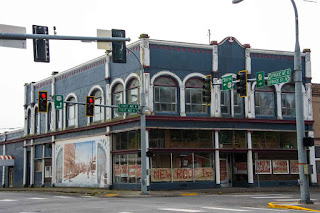 On the way back from Astoria,  I stopped in at Chinook County Park to pick up that geocache.  This is the tree the guy parked by and wouldn't leave.  That's my Jeep peaking around the tree trunk.  I discovered I wasn't even close so it took a little walking.  With no one in sight this time, I tromped through the berry bushes and FOUND IT!!  Yay for me!! 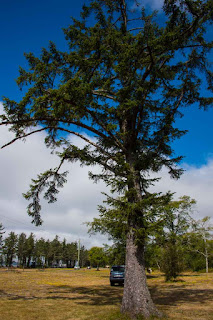 I stopped in at Fort Columbia (a story for later) and picked up a geo-snail (that yellow/green thing top left).  The new GPS from the Geocaching App doesn't work very well ... maybe that's by design? ... but I was finally able to locate this one.  I just parked with my new $30 Annual Pass and walked up the street.  One more at an old gate in nearby Seaview and I felt MUCH better about my treasure hunting skills!! 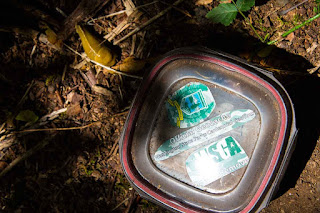 Did I stop at the Fish Hatchery?  Yes I did.  It said to locate the bridge you could not cross.  All I could find was overgrown bushes, spiders and bugs.  Phone service, and therefore phone GPS, isn't so great up here on the coast of Washington.  Just when I thought I was there, it would flip around and say 45 feet in the opposite direction.  Not being THAT fanatic about it, I gave up!!

Dinner was beef stew.  Yup ... I took my life in my hands, picked up a knife and chopped up everything without chopping off any fingers.  Always a good thing in my book!  Can you believe it?  I remembered the liner.  What an amazing piece of ingenuity! 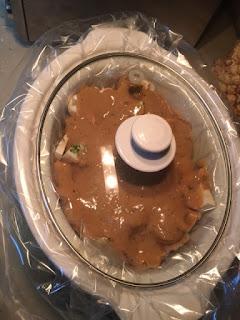 True to my good cooking skills however, I ruined the frying pan.  It was brand new.  The first batch of meat went well ... the second batch stuck to the bottom badly.  I used the wrong tongs to remove the meat and removed a lot of the coating along with it.  Thinking it probably wouldn't be a good idea to eat that much teflon, I gritted my teeth and dumped it, pan and all, into the trash.  The stew was still delicious, just a little short of beef! 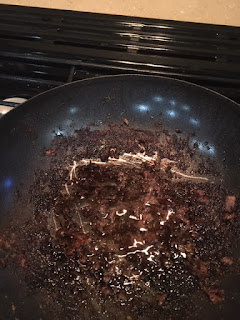 This picture has nothing to do with anything.  It's just a pretty picture of some of the flowers in bloom around here, in spite of the fog that lasts most of the day, followed by even more fog and rain.  I guess that's what makes your garden grow. 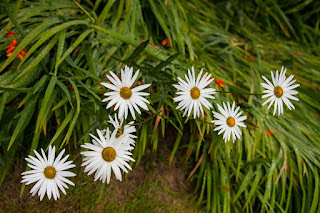 This morning Miss Jessie gets her stitches out.  She will be most happy!!  No more baggie bootie to keep her foot dry, which will make ME happy!!

The Washington State International Kite Festival starts today and runs through next weekend, so get ready for some pictures of GREAT kites!!!