When in Rome, do what the Romans do.   I showed this picture of my beautifully barbecued salmon the other day, since it's all about the silver fish this time of year.  I figured I was lucky to get this cooked without losing any appendages or burning up the picnic table.  Pretty soon however, I was tired of salmon .... like after the second piece. 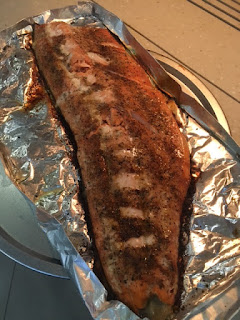 I imagine there are 29 recipes for salmon, but the only one I could think of was salmon patties.  Mix up a little onion, Ritz crackers and egg, along with a good dose of salt and pepper, and you've got dinner.  Of course all that butter in the pan helps too! 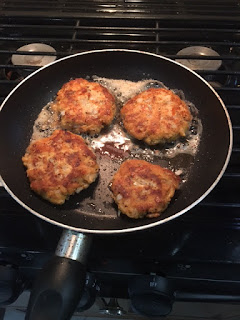 So when I saw this sign in the little village of Chinook, I figured it would be fitting to take a look and maybe learn something more about these critters.  The sign is a little deceiving.  At some point in history there was a salmon hatchery here I suppose, but really, they should take the sign down. 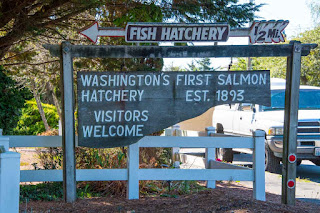 I braved the wilderness on the single lane road so you don't have to.  Just as I was about to give up, I saw this sign facing the wrong direction from the road.  I parked the Jeep and was immediately greeted by a BIG dog, who was at least wagging his tail.

Some guy in the back of a truck hollered at the dog when I asked if I could see the hatchery.  I didn't want to trespass on his property, which this appeared to be.  Just follow the TRAIL sign he said, but there are no salmon!! 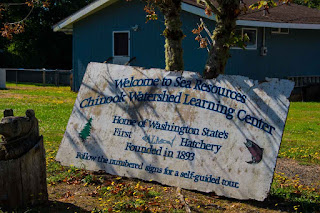 Okay then .... I walked along a pathway and across this little bridge seeing absolutely nothing before coming to a dead end.  I laughed .... really?  This is it??  Upon further investigation, I discovered the trail wound around a sharp corner and went a little farther, following what was at one time a canal.  Now it's so full of trees and brush you can barely tell it's there. 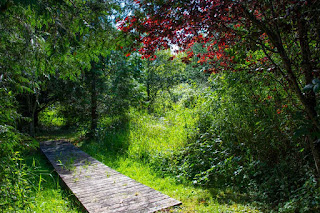 Gosh, that was interesting!!   At long last I came to a sign that explained the ditch/canal.  Apparently this facility hasn't been used in some time. 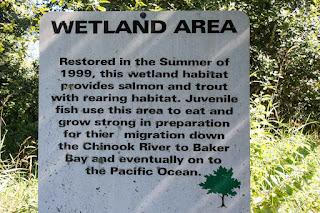 At the end of the long ditch, I found the catch station and finally a little more information.  In 1883, Alfred Houchen began experimenting with raising salmon from eggs gathered by the fish trap operators.  In 1890, the State of Washington took it over to make sure their rivers were flooded with salmon.  Having grown to considerable size in the ditch, they were caught here and taken to the closest river.  Yup ... that's the greenest algae stuff I've ever seen. 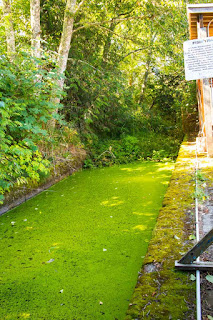 In 1935, the "No Salmon Trap" law came into effect and the operation ceased.  No traps, no eggs.  In 1967, a non-profit group took over the facilities to teach students the art of fishing and propagation.  At the same time, this greenhouse was built to grow native species for replanting.  Unfortunately, everything has fallen into disrepair. 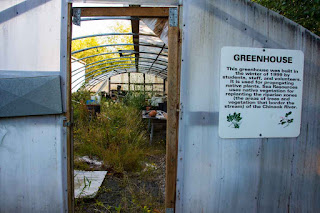 Once hatched, the fry were placed in these huge tubs.  When of sufficient size, they were poured out the bottom into the raceways. 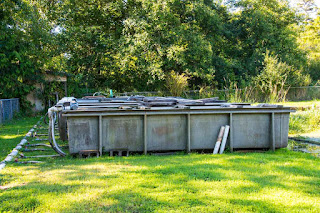 These are the original raceways, built of concrete in 1893.  Once of sufficient size, the salmon were transferred into the ditch.  Finally big enough to survive the ocean, they were caught and deposited in the rivers around the area.  Chinook salmon stayed in the raceways for five months, Coho's for up to 15 months before being released. 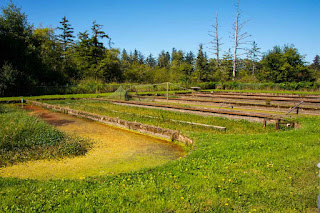 That's it .... tour over.  Now to walk through the back yard of the residents, keeping a sidelong eye out for the dog, and finally back to the Jeep.  It's sad this facility has fallen into such disrepair, although you can still get an idea of how it worked in the old days.

There was one last huge building ... I imagine where the eggs were hatched ... that had some heavy metal music coming out the windows.  I thought better of knocking on the door.

So when you see that sign saying VISITORS WELCOME .. FISH HATCHERY, just keep on driving, unless you have absolutely nothing else to do that day, like watching grass grow.   I'm kidding, it was cool to see the original raceways ... it would be cooler if they had salmon in them.

Posted by Nancy Kissack at 7:09 AM