Kicking Out The Freeloaders

Most mornings I jump out of bed ready to meet the world head on.  Not so much today.  Either old age is catching up with me or I need a new mattress.  I'm not mentioning the hummus.  I probably spent WAY too much time on my buttinski yesterday.  In case you didn't know, it's Rodeo season across the central U.S.

Now is the time the cowboys rush around the country trying to ride every horse and bull they see in order to pick up enough money to qualify for the National Finals Rodeo where the big bucks will be made.  The contestants are neck and neck.  If I had known you could make so much money rodeoing, I might have signed up for that occupation.  Of course back then, they made pittance.

So instead of watching horse wrecks on TV, I decided to seek out those that have set up housekeeping in my kitchen.  It didn't take long to find the latest condo.  Mom and Pop daddy longlegs set up their new home right over my Instant Pot.  I don't imagine all that screaming hot steam did the kids any good.  By the time I discovered it, it looked abandoned.  Sayonara my friends, I'm kicking out any and all freeloaders. 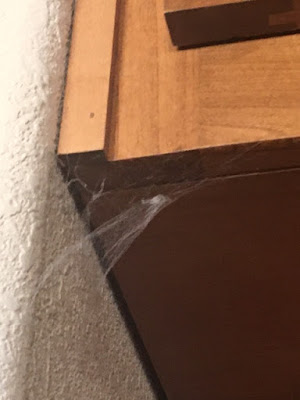 By the way, did I ever mention I was in the National Reined Cowhorse Association for awhile?  Not the reining people, but the cutting cattle people who also performed reining patterns.  There are lots of sliding stops and spins (which amazingly my horse did very well), along with working cattle in an arena, also on a specific pattern.
That's how I apparently cracked the vertebra in my back, but that's another story for another day.
Back in the day, I ran the practice pen for the cattle part of the World Championship competition.  As you can imagine, there were some strong personalities working their horses just before their time to show.  They got five minutes before I would ring the bell.  They never stopped ... wanting to get that extra edge of more time worked.  I would ring the bell again.  Finally I would have to stand up and yell TIME!!!
Let me just say that the National Reined Cowhorse Association has hit the big time.  From small town Fresno, they have moved on up the tall ladder to Las Vegas for a million dollar competition, which will be shown on the Cowboy channel tonight and tomorrow.  Tune in if you want to see what I aspired to way back when.  You will probably be surprised.
After cleaning the house ... sort of, since you know I'm not so good at that task ... and finding I have no more fabric for the big quilt (it's a block of the month quilt and I'm finally caught up), I couldn't sit still.  I drug out my box of fabric that's been laying around for ages and put this together.
Well, not exactly since it's not SEWN together yet, but it probably will be by the end of today.  Since I had no "board" to put it on, I drug out some old batting, stitched it together and nailed it to the wall.  It still needs borders too .... maybe Saturday. 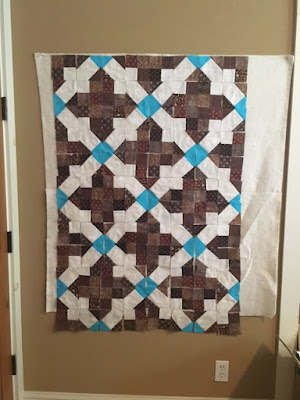 OH LOOK!! MORE HUMMUS!!  There's no such thing as a small batch of this stuff.  I wondered what happened to the nuts I had toasted since they weren't on the OTHER bowl.  I'm pretty sure this is the END of my adventure into the world of hummus.  I took about four bites and was so full I didn't eat dinner. 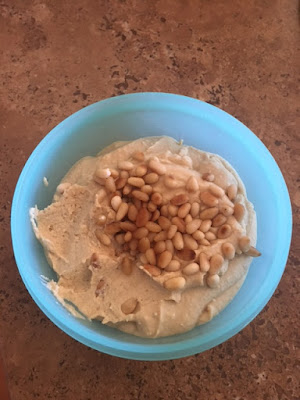 When I checked my emails this morning I discovered my PG&E bill had come through.  $77.77 (lucky sevens) for half a month on my dime and half a month on solar.  I tried to check the breakdown, but of course it's not available for a few more days.  No worries, I'll be checking out every single entry!!  As for now, Cooper is begging for a walk, so off we go!!!