After sitting through these 105 degrees days, a cool 73 on the patio with my morning coffee is highly appreciated.  It gives me time to think about all the amazing brains in the world that invent stuff.  A handy man is highly prized in my world, especially since I don't have one.  It has forced me to become semi-handy, or at least able to fix SOME things with too much repercussion.

Here's an example of ingenuity.  This is a hand washing gizzy that some smart man invented.  I'm giving credit to a MAN, but it was probably a woman that kicked him out of the house until he cleaned up, not leaving all that dirt and grease in her clean sink.

While up in the mountains, this is what Sandy brought for washing our hands.  Well not exactly this one, it was a prototype her husband made after seeing this online.  You fill the bucket with water, turn the spout the other direction and place a bucket underneath.  The end of the hose goes in the white bucket.  Then you step on that little bulb thingy and water comes out the spout.  Who knew about that little bulb?

The second bucket is just so your campsite stays dry ... you dump it when full.  This setup is also great for washing dishes.  Who knew??  You can imagine just how dirty you get in a dusty campsite with horses. 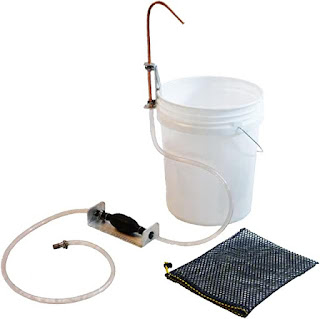 Then there was this.  We all know Progresso makes pretty good canned soup, although I never eat it.  I'm not really a soup person, but when you're camping in the back country, what could be better than opening a bag, pouring in water and dinner is served ... after a few minutes boiling on the barbecue or hotplate of course.
We didn't eat this one on the trip, so Sandy gave it to me to try here at home. 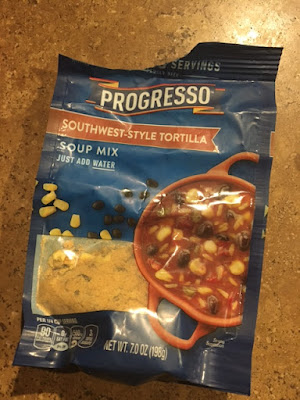 Not really wanting twelve cups of soup, I stirred it up in the bag and measured out about half a cup.  I added 4 cups of water (it calls for 8 for the bag) and let it go on the stove for 20 minutes.  Next I added a cup of that Costco chicken I had in the freezer.  When done, I followed one of Patty Chance's directives ... place tortilla chips in the bowl first.  There's something satisfying about crushing up all those chips you've tried to keep whole for dipping.
Pour in the soup, top with cheese and avocado and VOILA!!  Dinner is served.  Probably not the smartest thing to cook when it's 105 outside, but boy was it a tasty dinner.  I think this package runs about $5.00.  That's a pretty cheap dinner for a family. 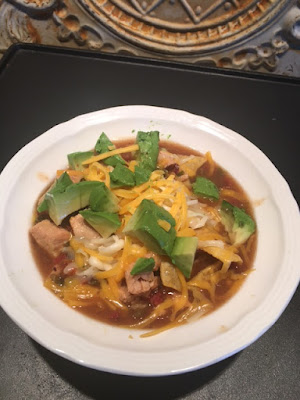 Oh yes, I'm still trying to get rid of this hummus.  Honestly these pine nuts have no flavor whatsoever.  I'm not sure what I'll do with the rest of the package of THOSE.  Maybe I'll try toasting them and eating them on my salads.  After that soup, I need something COOL!!! 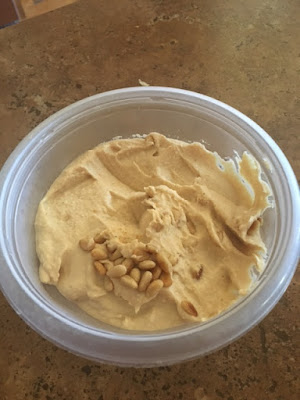 I'm happy to announce that all the hiking and walking in cowboy boots and spurs resulted in the loss of three pounds.  WOOHOO!!!  I'm sad to announce that it only took two days to gain it all back.  BOOOO!!!
You may be wondering how my solar is going.  Me too.  I'll check out the website for my usage and let you know tomorrow.  Right now I think I need a nap.  It was an awful night of nightmares, tossing and turning and mind racing thoughts.  It was the hummus, I'm SURE of it!!!