It Takes some Ingenuity

Every once in awhile, that morning coffee turns on a light bulb in my head.  I'm not all that ingenious when it comes to ideas.  I'm usually the one that copies everyone else's ideas.  Rarely do I have many original, creative solutions.  Especially when it comes to camping.

On this morning I'm having another one of those delicious, fat inducing, sugar filled, heart attack in a paper cup MUFFINS.  It worked.  I actually had an idea.

As you may remember, Cooper hurt his back and I was parked on the floor for almost a week.  That's not the most comfortable place to lay down.  I finally pulled the cushions off the chairs to sleep on so Cooper would not jump up on the couch.

I was having a hard time coming up with something to put on the seat backs in the truck.  They fold down flat, making somewhat of a bed, maybe 36" x 55".  Funny, they don't make the old fashioned air mattresses any more, at least not that I could find.  The light went on ... why not take two chair cushions and sleep on those!!  Woohoo!!!! 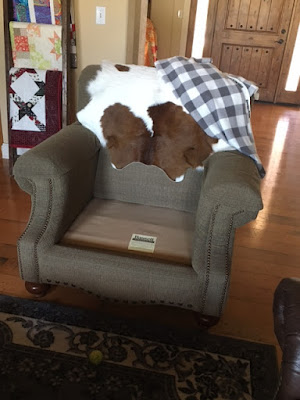 Sandy of course has her trailer.  I WOULD have a trailer, but I gave it away, to a good cause.  In this picture, the part up front with the window has a huge bed, with a small area for changing clothes, along with a water supply and of course the entire back for cooking, once we get there and unload the horses. 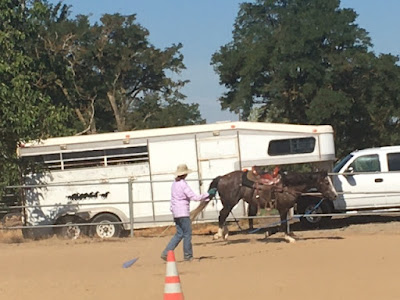 Trying to figure out what to take and how to make it fit in this tiny truck has been an epic test of my camping skills.  It's been way too many years.  (Picture from Arizona). 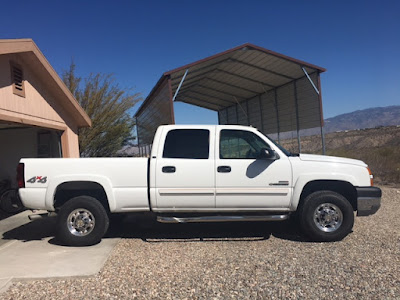 Water of course is essential.  I have a camp stove, but am not taking it since Sandy will have hers.  I emptied out all the Halloween costume junk to make a camp box.  I think I may need two, since I'm sure this will fill up quickly with Cooper and Jonathan food.  Oh yeah ... did I mention we are ALL going? 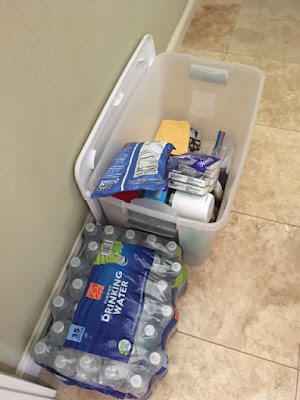 My truck will become a bedroom, changing room, hair styling salon, boot storage, breakfast cafe and animal eating center.  It's going to be tight!!  This big container is extra water for the horses, followed by two more that will be extra water for us.  The gatorade will go in the ice water container, followed by water bottles, ice and Jonathan's fridge food.  Cooper's stuff will go in the Yeti cooler I have that weighs so much I probably won't be able to lift it into the truck. 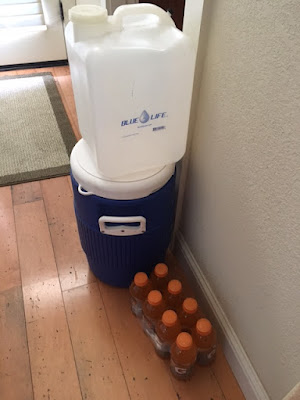 Luckily I checked my sleeping bag early to find a big nest of mice sleeping peacefully ... for one moment anyway.  That went in the trash, so I made a quick trip to Big Five and found a suitable sleeping contraption capable of temps down to 25 degrees (I don't believe that) for a measly $19.77.  What a steal!!  Add to that some of those cheap ponchos and two hat covers and I should be covered .. literally, in case it rains.
I'm off to ride again this morning, so packing will be delayed.  I'm still looking for my bag-o-water you place on the hood of your truck when you ride, so it becomes a hot shower when you return.  Hmmm how can I make a portable shower?  Hopefully it will come to me tomorrow morning on the patio.  I have tarps and rope .... that equals shower, yes?

Posted by Nancy Kissack at 4:52 AM