The sunset tried to peak through the trees, but my phone didn't capture the colors much at all.  On this night dinner was quesadillas Sandy whipped up on the barbecue.  All those Costco muffins I took along didn't get touched.  There's just something about being in the clean mountain air that makes you want to eat things good for you instead of sugary sweet stuff.  Except for my trail bars.  Okay, I admit, I ate peanut butter cashew trail bars!! 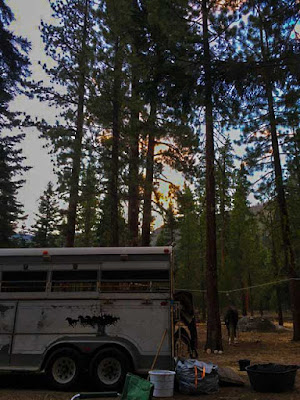 Another scary morning trip to the outhouse scanning the darkness for bears is always an eye opener.  When that pine cone fell from the tree and hit the ground nearby, I slammed that door and locked myself in.  I've had many bear encounters in my life and I really didn't need another one.  Especially since the nuisance bears from Yosemite National Park are brought up here and released.  We are very careful not to leave ANYTHING outside of the trailer or my truck.  By the way, these are vault toilets (no flushing) so I didn't stay long.
Add to that the fact that all the burned tree stumps look like bears, or bear cubs.  No kidding, I was always looking twice!!!
Here began the long discussion of whether we pack up and move to the next location, Kennedy Meadows, or whether we just head on home.
It's obvious by now that Mia is getting frustrated by being tied up the entire time.  She's a different package of muscle that likes to lay flat.  We really can't let her do that on the high line since horses are notorious for stepping over the rope.  That ends up being a rodeo while we try to get close enough to cut the string and release them. 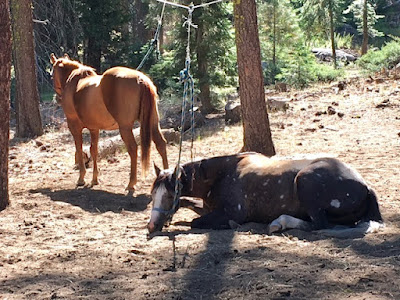 When her patience runs thin, she bucks up a storm (something unknown before this trip).  Even with several miles of ponying, her attitude didn't change.  There's nothing worse than a frustrated kinky horse on a mountain trail.  She did SO well getting into the river.  Too much frustration will erase every bit of it and we'll start all over again. 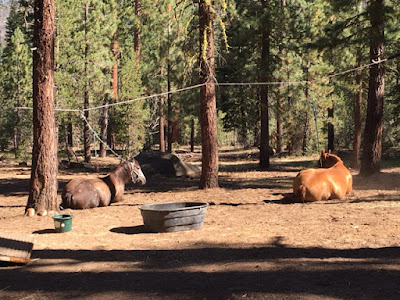 Better to end it on a good note and head back home than to meet up with 30 new horses at another location where she will again be tied up in all new surroundings.  Besides that, she probably needs another four months of riding before working on the mountain stuff.  You can overwhelm a young horse and end up in the dirt if you aren't careful.  Trust me, that is NOT fun!
Sandy made the final decision, so we broke camp and began packing up, tying the horses to the trailer so we could take the high line down.  Mia helped by biting the metal side.  She's probably the mouthiest horse I've seen in awhile, another sign of young nervousness. 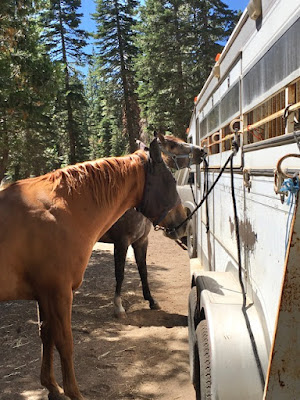 Sadly we headed out to the main road.  Luckily this entire campground section did not get burned, I think because the river runs along the edge. 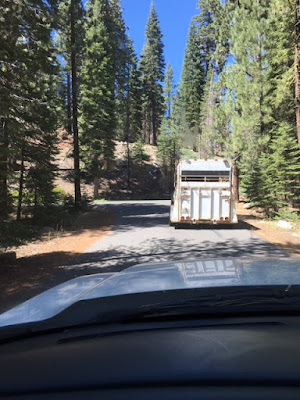 I did want to mention one other great tip I learned from Sandy about ice chests.  I guess I'm old school ... I bought a bag of ice and poured it over everything in my Yeti chest.  Of course the ice melted in two days, in spite of Yeti's claims.  Sandy buys those gallon jugs of water and freezes them.  She puts those in her ice chest and the food stays perfectly cold and DRY.  The jugs still had ice in them when we left.  When the ice melts, she uses the water for drinking and cooking.  How smart is that??
One last stop to check the horses before heading off down the hill.  Although that looks like trees, it's just burned tree stumps on the mountain.  So sad, but rather pretty ... all the black tree trunks. 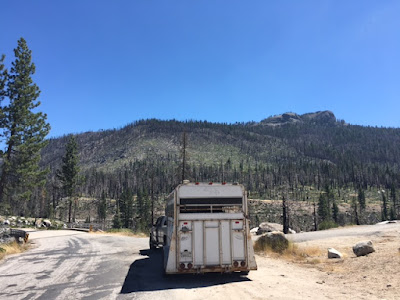 I picked up Jonathan, who apparently said not one single word the entire time, and headed home.  He talked up a storm as soon as he heard my voice.  Who would have thought a parrot would miss you?
First thing, Cooper got a bath, which of course makes him want to play.  He's still pretty wet around the edges here. 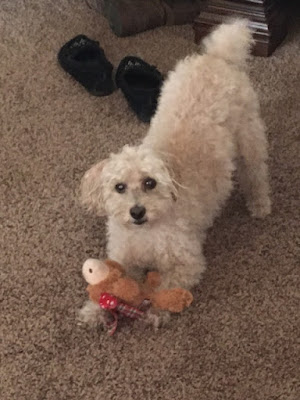 In no time, he crashed on the couch.  Me too for that matter.  I had forgotten just how much work it is to camp with horses. 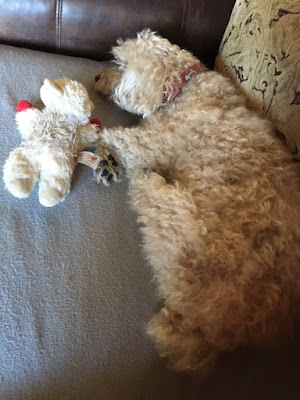 I unloaded the Yeti ice chest to find that water had invaded BOTH containers of Cooper's food, meaning it all had to be thrown away.  It even got into the leftover chicken I had in a waterproof container.  No, I didn't eat it ... all that stuff in the water didn't make anything look appetizing enough to keep.
Don't look if you're squeamish.  Here's one of my rope burns that almost healed up before I scraped the burned skin off accidentally while packing up the truck.  OMG blood went everywhere.  Of course taking white towels didn't help.  It looked like I murdered someone before I could get it bandaged up.  No worries, it will heal up eventually. 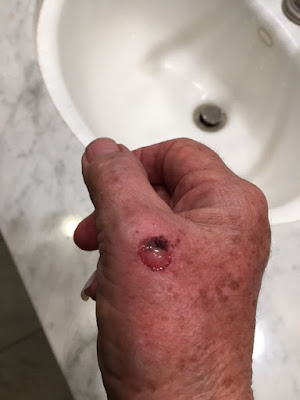 And so ended the horse camping trip.  There won't be another one soon, as Sandy is sending Mia off for a little more training.  We are both probably too old for bucking horses.  I rather think an older version would suit me more, but alas I have discovered they are a LOT of work.  Funny, I don't remember that part when I had horses.  I'll be on the couch recuperating!!