Ah yes ... the quiet early morning of the Sierra Nevada Mountains found everyone asleep except me.  Since I'm the one who gets up early, I was in charge of feeding and watering in the morning.  That of course comes after taking Cooper for a walk and hitting up the outhouse half a block away.

I can't explain how fun it is to walk that far in the pitch black of night with your one small flashlight, hoping and praying you don't run into a bear.  No kidding, it's sketchy!!

The horses always get to eat first.  They each get a leaf of hay, following by a bucket of water which you hand hold.  No use taking any chance that a horse will get his foot stuck in a bucket handle. 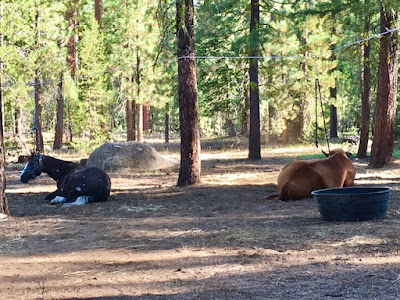 Someone else was taking advantage of the early morning hours also.  I can't believe he was so good this entire trip.  Although we did take a few walks, he was content to sleep in his bed on the cot. 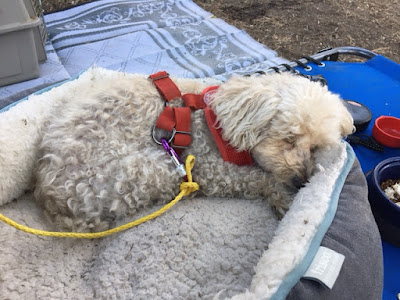 I'm just going to say here that Shaggs is a great driver pulling a horse trailer.  I can count the good ones on one hand.  She's also a good horsewoman whose horses really trust her.  To have good experiences, you have to be able to read your horse.  You can tell their mood, whether they are scared, whether they feel good or bad.  You can watch their ears and know exactly what's going on around you.  Truly, most horse people don't have a clue about this.
Since Mia is still young and crazy ... most young horses are ... Shaggs ponied her (led her while riding Mindy) around the campground before getting on, just to help get the kinks out.  Once they snort a little and relax, you should be good to go.  So off we went up the trail towards a tiny meadow maybe 5 or 6 miles out.
This is all new to Mia and she was pretty tense, so we decided to pony her most of the way.  One thing you don't want to happen is a bucking frenzy on the side of a mountain full of trees that are now burned into matchsticks just waiting to be bumped and fall down.  This area was completely devastated by fire two years ago.  It's amazingly pretty, but can be dangerous if you don't watch yourself.
Not wanting Shaggs to do all the walking, we traded off.  She would ride Mindy and I would walk ... in new boots with spurs hanging off the back.  No problemo ..... at least I'll be in epic shape going up and down these hills at 6500 foot elevation. 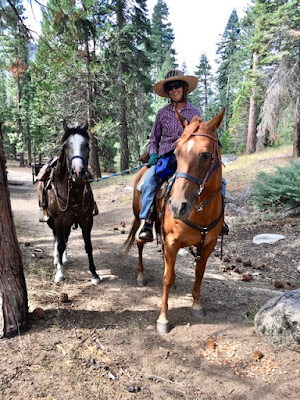 One of the main things we wanted to do was get Mia to cross water.  You might think horses would do this naturally, but they do not.  They have to be taught how to step slowly and carefully.  The first little creek was maybe two feet across.  I was on Mindy at the time.  I crossed leading Mia and stopped, giving her ample time to figure it out.
Again, she's young.  She panicked and made a flying leap four feet in the air, landing on Mindy and I (even though there was plenty of room for her to go by), before raking the left side of my horse and trying to take my leg off.  She was on the wrong side, so I dropped the lead rope, but not before it completely removed any trace of fingerprints on my hands, along with a goodly amount of skin.  Well that was fun!!! 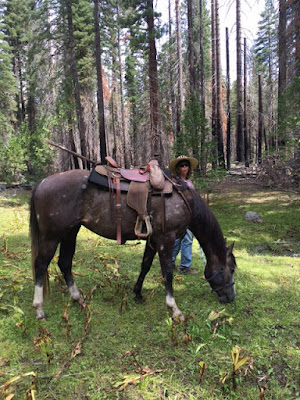 We caught her up easily since she wasn't about to leave her protector Mindy and we headed on further up to the next water crossing.  This time Shaggs held the lead rope from the ground.  The water came down the middle of the trail and was only an inch or so deep.  Mia did much better this time, snorting a little, but eventually walked through the middle.  SUCCESS!!
That's when the BELLS began clanging again.  Oh good grief!!  I'm in the lead on Mindy (who is afraid of cows) and I see a cow straight ahead on the trail, but covered by a big bush.  I holler at Shaggs, who goes ahead and chases them off while I wait with the horses.
So now here we are at the THIRD water crossing just before the meadow.  Sure enough, the meadow is full of cows.  Shaggs goes ahead once again to chase them off before returning to walk Mia across the last wider and deeper creek.  This time she did great ... no snorting ... a very good sign.
We got off and let the horses eat at the meadow, which calmed them down considerably.  That nice green grass got their attention off the clanging.  We decided that was far enough and headed back down the hill.  This time when Shaggs led Mia across the water, she wanted to walk on top of her, so she had to let go of the rope.  Mia said WOW and just walked on off down the trail.  Although most horses don't like to lead, she was on a mission.
There's one thing you don't do with horses, and that's chase them.  It makes them run away faster.  So we waited for her to realize she was completely alone.  Sure enough, she looked around, whinnied WHERE ARE YOU and came running back.  Whew!!!
Next water crossing .... instead of going down the trail through the water, she took off up the hill and Shaggs couldn't hold on.  Off down the trail she went again!!  Now Mindy thought that was okay the first time, but THIS time SHE didn't want to be left alone.  She reared up and whirled around.
No problem, I stuck with her, but there's nothing like having 1500 pounds underneath you trying to run off.  It's a good thing I'm a pretty good rider if I do say so myself.  One more rear and whirl and we went through the creek like it wasn't even there before Mia finally looked around and discovered she was again alone.  She came running back, making both horses happy.
Big sigh ... okay, between the cows and the water, we decided it was time to call it since she went over the last water just fine.  Back to camp we went, switching off ponying her and walking.  As you can see, she was pretty tired when we got back.  No kidding!!!!! 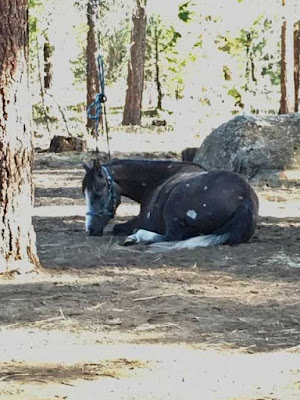 That's how it goes when you have a young horse.  You learn, they learn and hopefully you come back with all your parts and pieces.  You also always end on a good note.  Never stop when they misbehave or don't do what you want.  Since she had crossed the last three creeks in good form, we decided it was time to quit.
Cooper had spent the morning in his kennel, safely locked in the horse trailer.  When he heard my voice, he began barking, very happy to see us back.  I doctored my hands and we relaxed in camp before fixing a delicious bacon and tomato burrito for dinner.  Boy did that ever taste good!!!
While feeding, Shaggs fixed Mia's high line so she could move a little more.  Turns out that wasn't a good idea.  When she hooked her back to one spot, Mia got really frustrated and mad.  Suddenly she went into a bucking crazy frenzy.  Shaggs had never seen her buck before EVER.  There was nothing we could do but watch.  Thank goodness the high line held and she finally stopped ... for a few seconds .. then she went at it again.
Mind you, Mindy is tied right next door.  She had had enough.  Here's an example of being able to READ your horses.  Mindy backed up ever so casually to within kicking distance of Mia, turned her head sideways, put one ear back and gave her the evil eye.  Mia stopped immediately and calmed down.  Mindy took three steps forward and went back to eating her hay.  That was it ... no more bucking or nonsense out of Mia.
OH BUT WAIT ..... MORE COWS!!!!  This time a huge group came up the road clanging away.  I went out to move them over so they wouldn't go right through camp.  Like reading horses, it's a good thing to be able to read cattle.  There is always a BOSS and it's always a cow ... not the bulls.  Boss Mom was having none of it.  She had that I'm going to run your a$$ over look, so I headed for the closest tree and threw a few pinecones at her.  They finally took off, making a big loop around the campground before heading back from whence they came.  This time the horses weren't as spooked since Shaggs stayed near them.  Thankfully the cows and calves did not come back.
Soon it was time to hit the hay.  I rearranged my bedroll to give Cooper a little more room and hit the cushions.  I guess I slept pretty well because I didn't hear the coyotes that howled for about an hour.  In a flash, it was time to feed the horses again, but that's tomorrow's story.