And Then The Rains Came!!

I peeked out the garage door yesterday morning.  Yup ... she's still there!!  I fed the puppies quickly and went to see just how she was doing.  The difference is just amazing.  It was SO cool inside.  You know what else?  I can open up the windows and let the cool air flow through .... maybe even get rid of that musty smell RV's seem to get.

I usually have to run both exhaust fans in the ceiling to keep some kind of air movement.  I turned both of them off.  I raised all the shades and opened a few windows.  It's just so nice inside I can't stand it!!  Yessiree ... I need another one in California ... or maybe just sell my house!!  Ha!! 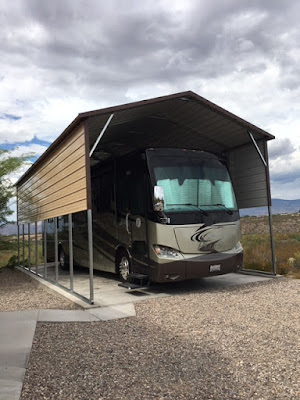 Time to get to work however ... no dilly dallying when it's just under 80 degrees outside.  These three oleander bushes were completely to the ground.  They made great cover for the quail, but also might make great cover for a snake who happened to figure out how to get in.  In puppyville, that's not good.

My flat kitty?  She makes Cooper bark and growl almost every time he goes out!  It's hilarious ... and made of metal!! 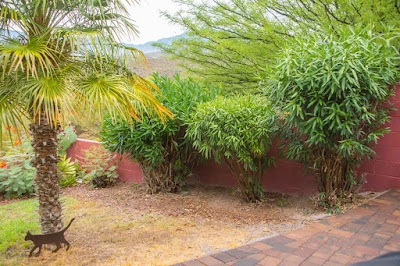 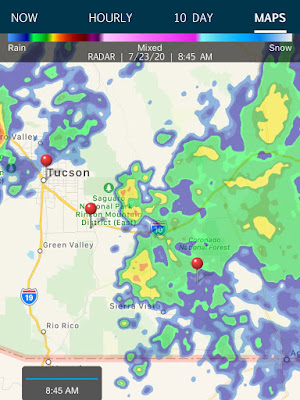 By the time I put away the rake and trimmers, big drops began to fall.  I'm not sure where it came from since there were still no clouds overhead.  The winds picked up something fierce.  It was a good test as I ran back to the motorhome to see just how much the cover would move.   These covers are a little bit flexible, moving about 1/2 inch at the top in this really heavy wind. 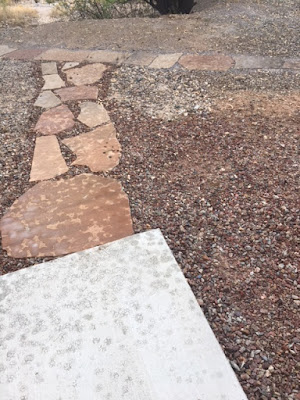 I didn't make it back inside before the rains came!!  WOW ... monsoon rains here always surprise me with the amount of water they drop.  I kept a close eye on the new construction as I grabbed a towel.  I was soaking wet.  I expected to see the cover fly away like in the Wizard of Oz, but it never budged. 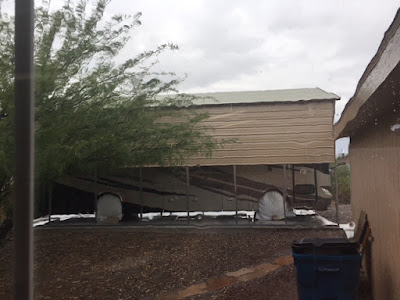 All that rain lowered the temperature down to a lovely 72 degrees this morning.  Rain is predicted for the next eight days.  I'm loving it.  There should be lots of nice lightning pictures coming up!! 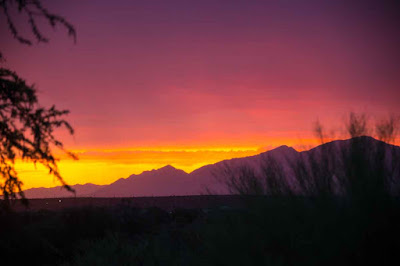 In the meantime, all those beautiful black clouds made for a magnificent sunset!!!